Central African Republic is one of the poorest countries in the world although its rich with natural resources and potentials such as diamonds, uranium, timber and gold; CAR has been unstable since its Independence from France as the country faced lots of coups and decades of blood sheds, conflicts and wars. In 2013 an armed Muslim group seized power over the country and executed numerous incidents of violence resulting in a backlash by an armed Christian group that also responded by violent incidents. With citizens being the major victims of these incidents CAR occupies the 3rd place in the Fund for Peace 2014 Failed States Index as the latest events escalated into genocides and ethnic cleansing that increased the country’s insatiability and deteriorated human rights conditions, making CAR Africa’s bleeding heart. 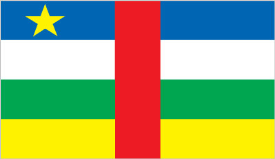 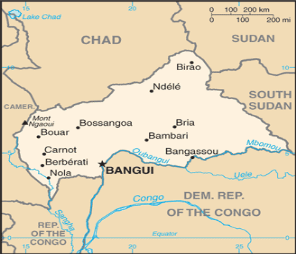 Population: Central African Republic has a population of 4.6 million, with 40.6% of the population between the age of 0-14 years.

Language: there are 2 official languages in CAR which are French and Sangho, in addition to some tribal languages.

After seeking Independence the country finally achieves it in 1960 and David Dacko -Boganda’s nephew- becomes the first president of the country, and in 1964 he is confirmed as a president in elections in which he was the only candidate.

In 1965 as the country was facing banckrupcy the army commander Jean-Bedel Bokassa leads a coup and overthrows Dacko. At first Bokassa declares himself a president for life but then in 1976 he declares himself emperor and renames the county the “Central African Empire”.

After widespread protests in 1979 in which many school children were arrested and massacred while in detention Dacko -backed by French troops- leads a coup and rises back to power. However he is soon deposed in a coup led by the army commander Andre Kolingba.

In 1992 a multiparty presidential and parliamentary elections took place in which Kolingba came last but these elections were annulled by the supreme court and another elections occurred in 1993 in which Ange-Felix Patasse wins to end 12 years of military rule.

In 1997 France begins withdrawing its forces from the country and African peacekeepers replace the French troops, in 1999 Patasse is re-elected and the former president Kolingba comes in 2nd place with 19% of votes.

In March 2003 the army chief of staff Francois Bozize leads a coup d’etait.Upon seizing the presidency, Bozize suspended the country’s Constitution and dissolved the National Assembly.Though he promised to step down after an initial transitional period to democracy, Bozize was reelected in 2005 and began calling for national unity, development, and democratic freedom.

A peace deal known as theBirao Peace Agreement, which was signed in 2007 between the government of the CAR and the rebel group Union des Forces Démocratiques pour le Rassemblement UFDR (Union of Democratic Forces for Unity), appeared to solidify Bozize’s intentions.

Further progress was seemingly made with the2008 Libreville Comprehensive Peace Agreement, which, in addition to the UFDR, also included the rebel groups Armee Populaire pour la Restauration de la Democratie (People’s Army for the Restoration of Democracy – APRD) and the Front democratique du Peuple Centrafricain (Democratic Front for the People of the Central African Republic – FDPC) in its negotiations. Together, these deals promised amnesty; disarmament, demobilization and reintegration (DDR) programs for former combatants; and political power-sharing.

Yet, the fragility of these peace deals was soon evident. In 2010, the Bozize regime came under fire from opposition leaders who announced their intention to boycott the January 2011 elections in light of institutional changes affecting the voter registration process. When Bozize was reelected in 2011, his victory was shrouded by allegations of election fraud that further threatened the already-declining security situation in the CAR.

The Bozize government’s inability to demobilize rebels and ex-soldiers, along with such foreign involvement as a February 2012 joint offensive between troops from the CAR and neighboring Chad (which sought to weaken a Chadian rebel movement and left thousands of civilians displaced) added to growing instability throughout the country.

The Seleka, mainly composed of factions of armed groups in northeastern CAR, including the UFDR and FDPC, as well as the Convention Patriotique pour le Salut Wa Kodro (CPSK) and the Convention of Patriots for Justice and Peace (Convention des Patriotespour la Justice et la Paix – CPJP), criticized Bozize’s government for failing to implement the DDR program in the northeast, declining to investigate rebel and government crimes that had been occurring since 2005, and demonstrating a general lack of governance in its region.Capitalizing on the fact that the country had been “ virtually ungoverned ” outside of the capital, Bangui, for years, the Seleka rapidly captured several strategic towns in early 2013 and was poised to take Bangui next.

A hasty intervention by Chad and the Economic Community of Central African States (ECCAS) instead persuaded the Seleka to negotiate with Bozize’s government. The result of these negotiations was the Libreville Agreement of January 2013, which established a three-year power-sharing arrangement in the CAR.In addition, itstipulatedthat Bozize would remain in office until 2016, but that he would not be allowed to run for a third term beyond that.

Unfortunately, however, the Libreville Agreement was made between regional heads of state rather than heads of warring parties in the CAR, which, as the Council on Foreign Relations noted , increased the difficulty of implementing real change because it neglected to consider the “intricacies” of the conflict.

The government’s failure to carry out agreements under the 2013 Libreville Agreement generated anger and frustration on the part of the Seleka, who resurged and took control of Bangui and 15 of the CAR’s 16 provinces on 24 March 2013, a move which simultaneously caused Bozize to flee to Cameroon . Upon seizing the capital, Seleka leader Michel Djotodia proclaimed himself President and suspended CAR’s constitution.

Djotodia’s leadership was immediately criticized at the international level, as his Seleka fighters were accused of having used child soldiers in their successful overthrow of the Bozize government, as well as having engaged in the looting of villages, the raping and killing of civilians, and the abduction of members of the national army. Continued violence on the part of the Seleka even after Djotodia took office raised additional questions about the security situation in the CAR.

By August theSéléka-run government under Djotodia was said to be increasingly divided.The conflict worsened towards the end of the year with international warnings of genocide. The fighting was between the government of the Central African Republic ‘s former Séléka coalition of rebel groups, who are mainly from the Muslim minority and the mainly Christian anti-balaka coalition – Anti-balakaare Christian and animist militias formed in the Central African Republic after the rise to power of Michel Djotodia in 2013-.

In January 2014 President Djotodia resignedand was replaced by Catherine Samba-Panza ,but the conflict continued.

As soon as Djotodia left office, Seleka forces began to withdraw from their outposts across the country. In town after town, when the Seleka left, the anti-balaka militia moved in and launched violent attacks against the Muslim minority.

Because international peacekeeping forces were extremely slow to deploy across the country, the field was open to the anti-balaka to assert their power and authority.

They killed many hundreds of Muslim civilians, sometimes in large-scale massacres, looted Muslim homes and shops, and burned and destroyed mosques.

Anti-balaka fighters are now the main perpetrators of violence, especially in Bangui and in the western third of the country. Seleka forces that retreated to the north also continue to commit serious human rights abuses in the territory under their control. There is currently no functioning justice system in CAR, with little or no possibility of police investigations, court proceedings, and incarceration, resulting in total impunity for human rights violations. 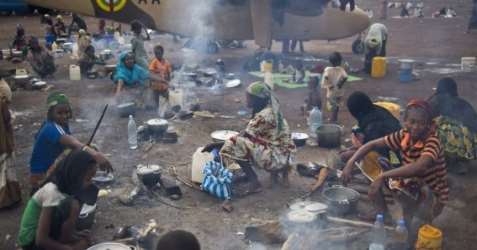 “Civilians are being killed by all sides at an alarming rate and people are desperate for protection,” said Lewis Mudge , Africa researcher at Human Rights Watch

Almost 2.5 million out of the 4.6 million population are in immediate need of humanitarian assistance, 620,000 unable to receive basic health care & medicine, and more than 430,000 internally displaced people inside CAR . Thousands of houses have been looted and burnt, leaving many people – Christians and Muslims alike – without a home to return to.

The few thousand Muslims who remain in the capital and the western part of the country (where they used to represent about 15 percent of the population) are nearly all displaced. Many are taking refuge in churches, and most are waiting for evacuation, fearing attacks

Since the beginning of the clashes more the one million people -quarter of the population- fled their homes escaping from violence and seeking safety.

Recent months have witnessed massive ethnic cleansing: a forced exodus of tens of thousands of Muslim civilians to Chad, Cameroon, Democratic Republic of Congo, and the Republic of Congo -in order of concentration of refugees-. Much of this newly-created refugee population is living in makeshift camps where conditions are dire.

Those who have fled are often traumatized, malnourished and dehydrated. Many have walked for weeks and taken refuge in the bush along the way to hide from armed groups. Some have been exposed to atrocities and survived violence. The majority are women and children, as the men in the families often remain in CAR to protect family assets. Many people fleeing CAR have serious medical needs stemming from injuries during attacks or displacement.

in 17 December the UNICEF warned that 2 out 5 children urgently needing humanitarian and vital aid are without it. There are 5,000 severely malnourished children under-five, and about 159,000 under five need highly nutritious foods.

Since the beginning of the clashes both groups used child soldiers, some forced to join and others volunteer out of poverty or the desire to avenge the deaths of beloved ones. The number of child soldiers increased from 2,500 at the beginning of the crisis to an estimation of 6,000-10,000 on Dec. 2014 with some of them as young as eight years old.

Operation Sangaris: there has been a presence of French troops in CAR before the recent crises – as France had troops deployed in March 2009- and May 2014 French troops took charge of the security of the airport in Bangui, however the situation was deteriorating in CAR, and as a result on December 5th, 2013, the President of France announced his decision to reinforce the French troops in CAR to prevent a humanitarian disaster in the country in what is known as Operation Sangaris, by which France deployed 1,200 troops making the total number of French troops rises to 1,600 which increased since then to about 2,000.

MINUSCA: Despite the presence of the Operation Sangaris and an African Union led troops (MISCA) yet violence and widespread human rights violations continued to happen in CAR. Trying to stop this bloodshed the UN Security Council authorized on the 10th of April 2014 the deployment of a multidimensional United Nations peacekeeping operation (MINUSCA) , and on the 15th of September the MISCA mission transferred its authority over to MINUSCA.

The mission has a total of 6,590 military personnel out of authorized 10,000 personnel in addition to civilian personnel.

The mission has some initial priority tasks set by the security council, which are: