Despite over 40 years elapsing since publication of the Report of the Royal Commission on the Status of Women (RCSW), which called for a national childcare program as a necessary step towards gender equality, Canada still has no national program for early childhood education and care (ECEC). Despite taking on a larger, yet still modest, role of financing and shaping ECEC between 1966 and 1995 under the now-defunct Canada Assistance Plan (CAP), the federal government has now all but completely withdrawn, leaving the provinces and territories to manage ECEC nearly autonomously.

As more and more women – the predominant childrearers in modern Canadian culture – enter the workforce without a corresponding decrease in the rates of fathers in the workforce, the Canadian provinces and territories are feeling great strains in an attempt to meet the ECEC needs of their populations. With the exception of Manitoba and Quebec, Canadian women in major cities spend between a quarter and a third (23 to 34%) of their income on full-time ECEC (Macdonald & Friendly, 2014). In fact, those crippled by ECEC costs are the lucky ones: Outside of Quebec, eighty percent of Canadians see the lack of spaces as a serious problem (Environics Research Group Limited, 2008) with a shortage of available spaces nationwide (Anderssen, 2014).

Some single mothers and two-parent families are able and comfortable to rely on relatives, friends, or unlicensed ECEC, but those in need of licensed daycare are often out of luck. After thirteen years of being in power and promises for a national program, the Liberal Party of Canada managed only to negotiate individual agreements with the various Canadian provinces in 2005. Harper’s Conservatives quickly replaced the Liberals and their promises in the wake of the sponsorship scandal, opting instead to pay families $1,200 per year for each child under the age of six. More recently, the Conservatives have proposed further financial tax reduction strategies for families, while the National Democratic Party (NDP) under Thomas Mulcair has unveiled plans for a national ECEC program.

As Canadians and the politicians gear up for the 2015 federal election, one of the burning questions will be which is better for the Canadian economy, Harper’s subsidies or Mulcair’s national program? Thus far, the Conservatives have managed to control early childhood education and care their way, but an increasing number of voters are dissatisfied and looking for an actual national program that meets the needs Canadians coast to coast.

This paper will navigate the tumultuous waters of Canadian early childhood education and care policy by identifying how the issue got on the agenda and progressed through the 5-stage policy model (Howlett, Ramesh, & Perl, Studying Public Policy: Policy Cycles & Policy Subsystems, 2009), identifying and mapping the policy subsystem (Pross, 1986), identifying and discussing the positions of the Conservatives, the NDP, and ECEC pressure groups, and – finally – identifying who won the debate.

The second-wave women’s movement in Canada included as a central pillar improved access to childcare, for which calls had been made since World War II (Collier, 2012). The 1970 RCSW reported stated on page xii that, “the care of children is a responsibility to be shared by the mother, the father and society. Unless this shared responsibility is acknowledged and assumed, women cannot be accorded true equality” (Canada, 1970). Feminist activists of the time succeed in bringing the issue of ECEC onto the formal government agenda through growing grassroots support, aligning with other likeminded groups, and use of campaigns, lobbying, legal challenges, and public education. This process constituted Outside Mobilisation (Howlett, Ramesh, & Perl, Studying Public Policy: Policy Cycles & Policy Subsystems, 2009), which ultimately succeed in the government implementing the Canada Assistance Plan (CAP) in 1966.

The CAP was a cost sharing agreement between the federal government and the provinces and territories aimed at improving the lives of low-income earners, with a portion of the federal funds assigned to childcare services (Rauhala, et al., 2012). While limited in scope and effect, it did spark the development of ECEC in Canada. Many still campaigned for a national approach and the federal government did attempt this several times though was never had the clout to succeed: Trudeau’s Task Force on Child Care in 1984; Mulroney’s Special Committee on Child Care in 1986; Chrétien’s Red Book in 1993.

The revival of the women’s movement in the 1990s and the election of the Liberals in 1993 brought childcare back onto the public agenda. Chrétien axed the CAP in favour of the Canada Health and Social Transfer, which decreased federal power in matters that were under provincial jurisdiction, such as social services. It also made the provinces less accountable in spending public funds. Having made strides forwards, hopes for a national strategy were quickly dashed as provincial programs disintegrated (Rauhala, et al., 2012). The Liberals developed the National Children’s Agenda in 1997. Two years later, they were successful in getting the federal, provincial, and territorial governments to agree to the Social Union Agreement. The agreement allowed the various jurisdictions to work together through the Federal-Provincial-Territorial Council on Social Policy Renewal to support the delivery of social programs and services (Cool, 2007). Thanks to the council, there have been numerous policies for young children, including the National Child Benefit (1998), the Early Childhood Development Initiative (2000), the Multilateral Framework on Early Learning and Child Care (2003), the Bilateral Agreements with provinces (2005), as well as the 2006 Universal Childcare Benefit (UCCB).

In the mid-2000s, a number of international reports were published, highlighting Canada’s stark underfunding and underdevelopment of ECEC. In 2004, the first major comparison of early childhood education and care across affluent countries noted that national and provincial policy was in its “initial” stages, that care and education were still treated separately, and that coverage was low compared to other wealthy countries (Organisation for Economic Cooperation and Development, 2004). The report’s exposure of shortfalls in services for young children prompted the federal government back towards a national strategy (Rauhala, et al., 2012).

In response to the OECD report, the Liberals announced in the 2004 Speech from the Throne that they would work with the provinces and territories to put in place a national ECEC program (Privy Council Office, 2004). In 2005, the Liberals signed individual, bilateral agreements with all provinces and territories that would provide federal funds for provincial childcare initiatives. Childcare advocates thought a national program was “closer than it had ever been before” (Friendly & Prentice, 2009). Frustratingly, all this work was immediately undone when Harper was voted into office.

Harper’s 2006 UCCB offered families a monthly rebate of $100 per child under the age of six but, importantly, no national childcare program. In the same year, the second installment of the 2004 OECD report found that Canada spent just 0.25% of its GDP on ECEC programs for children 0-6, placing it at the bottom of the table (Organisation for Economic Cooperation and Development, 2006). There was little political will for change under the ruling Conservatives, and so there has been only stagnation on this issue over recent years. This was confirmed by a 2008 report that put Canada tied for last place on the Report Card, a table indicating whether economically advanced countries are meeting certain minimum standards for early childhood education and care (Adamson, 2008).

Recently, the public has been becoming increasingly discontent with the Conservatives’ method of addressing ECEC. As costs of childcare has skyrocketed in all jurisdictions except the one that has strong funding and legislation (Quebec), the issue has come to the forefront of public discourse and is shaping to be a defining feature of the 2015 federal election. Indeed, one of the first proposed the policies the NDP released in its campaign was its solution to the ECEC question (Anderssen, 2014).

In the 5-stage policy model, policy formulation marks the second stage. To follow the theory, the ECEC debate can be analysed from two perspectives. Firstly, new actors (namely, Thomas Mulcair) have increased the speed of change on an entirely recycled idea. Hence, the speed and mode of policy change is defined as rapid normal. Secondly, while there has been an entrance of new actors, the idea is not new. Therefore, policy instrument types determine the type of policy change.

The third step in the policy cycle is decision making. Looking at the issue of national ECEC, there are few actors involved and all are contained within one setting. Simultaneously, the issue is clearly defined with plenty of information and time to act on and with. Therefore, this type of decision making would be classified as rational (Howlett, Ramesh, & Perl, Public Policy Decision-Making, 2009).

A historical analysis of the policy instruments – the policy cycle’s fourth stage – deployed over the life of the ECEC debate shows that, for the vast majority of the time, the various governments have used affirmative expenditures to promote the use of childcare and education. At present, the Harper government utilises monthly cash transfer in order to offset the cost of ECEC. It also offers tax breaks, a form of tax expenditure. Governments have left regulation up to the provinces, who license the various childcare centres within their own jurisdiction (Pal, 2010).

The fifth and final stage of the policy cycle involves policy evaluation, which can be conducted either formally (e.g. by bureaucrats and politicians) or informally. The Harper government’s UCCB has been analysed by formal institutions to a small extent, but it has predominantly been critically evaluated by NGOs, in the form of interest groups, and the broader public. Recent polls have shown that lack of affordable ECEC is a serious problem to three-quarters (77%) of Canadians (Environics Research Group Limited, 2008). Academics have been evaluating the UCCB on performance and financial spectra. The consensus is that the Conservatives’ approach is not meeting the broader economic goals and fails to provide Canadians with the services they need (Friendly & Prentice, 2009). Furthermore, academics argue that there is no value for money, with poor documentation of spending (Friendly M. , 2014). 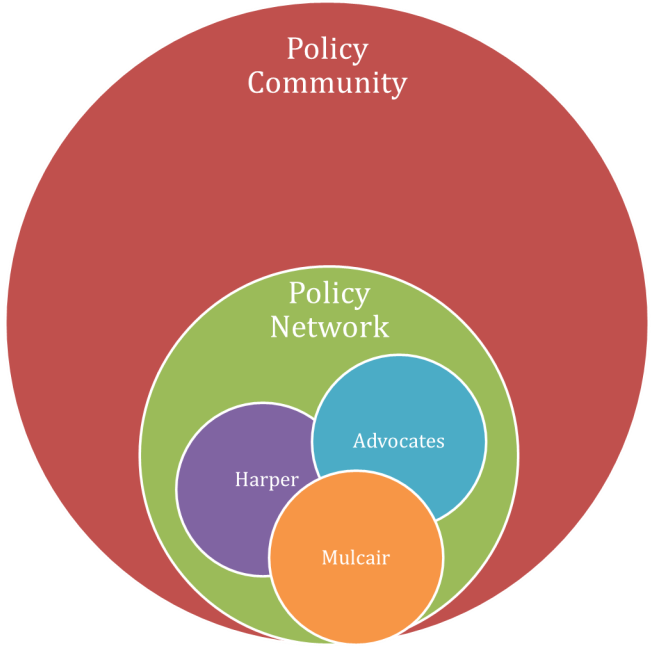 In conclusion, thus far the Harper government has been winning the policy debate on ECEC. They have been able to pass their desired bills, which are a far cry from what other parties are advocating for, and hardly even register on international measures of performance (Organisation for Economic Cooperation and Development, 2006). However, recent newspaper and other mass media suggest that the issue may finally be important enough to Canadians that parties’ stances on this issue will greatly shape the next federal election. Whoever wins that vote will have their policy preferences met.

Anderssen, E. (2014, October 17). The NDP child care plan gives parents hope, but the details are fuzzy. Retrieved from The Globe and Mail: http://www.theglobeandmail.com/life/parenting/the-ndp-child-care-plan-gives-parents-hope-but-the-details-are-fuzzy/article21143936/

Friendly, M. (2014, October 17). The daycare debate: A look at the politics of affordable child care. (A. Chowdhry, Interviewer)

Privy Council Office. (2004, October 5). Speech from the Throne to Open the First Session of the 38th Parliament of Canada. Retrieved from Privy Council Office: http://www.pco-bcp.gc.ca/index.asp?lang=eng&page=information&sub=publications&doc=aarchives/sft-ddt/2004_2-eng.htm