As the United States’ federal deficit continues to grow, many are asking for a balanced budget amendment to be added to the constitution. A balanced budget amendment would require the federal government not to spend more than it receives in revenue. This means it would be unconstitutional and against the law for the federal government to accumulate budget deficits.

THE NATIONAL DEBT ISN’T GOING TO GO AWAY

According to the 2012 Congressional Budget Office report, our current policies will eventually lead to a federal debt that would eventually reach a 90% gross domestic product by 2022, 109% by 2026, and 200% by 2037 (CBO 11). These estimates are based on the assumption that our current laws remain generally unchanged and that our spending policies which is the cause of the accumulation of budget deficits remain the same. The CBO budget estimates are also based on forecasts of economic state, demographic trends, and past experience. The other interesting estimate that the CBO reported was that even if there were general changes in our current laws, they estimate that the budget deficit would reach about 60% of GDP by 2020 which is only 10% lower than our current situation (CBO 7). 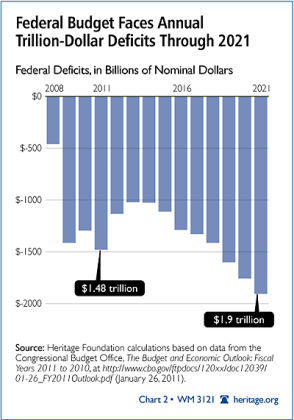 As indicated by the chart above, our annual deficit through 2021 would never drop below $1 trillion dollars under current policies. Although the main cause of the spike in deficit spending from 2008-2011 was mainly due to the recession, the Congressional Budget Office doesn’t believe the United States would recover under current laws. The balance budget amendment does allow exception, which in this case is the recession. If the national balance budget amendment was in place then after 2011, the annual deficit would only go down because of the radical budget changes in programs.

It’s pretty apparent that the money we are borrowing is increasing more and more, but what will happen when it reaches that point when we have to start repaying these loans? The government textbook gives us a great example of what happened to Greece when they couldn’t pay off all their loans. The interest rates on Greek government went way up and by 2011, they had to pay 25% to obtain a two-year loan from private sector (Sidlow 6). Compared to the United States, we are paying a mere 0.44% compared to the 25% Greece had to pay. The ending results in the Greek government shut out of private borrowing and had to depend on other European countries. The Greece example and the CBO’s estimates are huge future implications and urge for huge changes in our policies which I believe is the federal balanced budget amendment.

Although most states in the United States have a balanced budget amendment, the federal government does not and usually work with a deficit. California has struggled with the state deficit ever since the 2002 recession. They were in a deficit of more than $20 billion in 2003 and had to force drastic cuts to meet their budget (Gerston 104). In 2011, the state was in a $26 billion deficit and Jerry Brown had to take drastic measures and force more cuts in programs. All this summarizes to one thing and that is they took care of their problems with minimal support. The current federal government under the Obama administration doesn’t seem to be taking drastic measures to cut federal deficit. Instead, it seems the federal government is spending more than ever. One example of wasteful spending that I found is the building of an unused $75.5 million airport and a $29 million harbor with no roads in Alaska in 2012 (Yahoo). It’s really questionable for them to use stimulus money for these projects.

The building of the unused airport and harbor is an indicator that not all politicians share the same view. The ones that run the country and the ones that run a state may have opposing views and that could bring up different priorities. According to the Government Accountability Office, the United States is on an unsustainable path because of the emphasis on Medicare and Social Security spending (Wikipedia). President Obama is known for his emphasis on Medicare and that could be contagious to other politicians. What I am trying to draw from this is that if President Clinton, who had a surplus during his administration, was still the president then I don’t think we would have an overspending problem. President Clinton attacked the deficit by balancing the budget through ordinary fiscal policy and raising taxes (Wikipedia), whereas President Obama doesn’t seem to be drastically cutting spending or raising taxes.

WHY THE NATIONAL DEBT IS ONLY GROWING

The United States would never recover from this deficit unless they fix one problem and that is overspending. The revenue the public generates is fine, so that isn’t the problem. The problem lies with the government and the excessive spending. Congress has three options concerning spending which are 1) they can cut it, 2)raise tax rates, or 3) pass it to the localized government. From my perspective, it seems like they did none of these and chose to spend money that isn’t budgeted which essentially only adds more to the deficit. 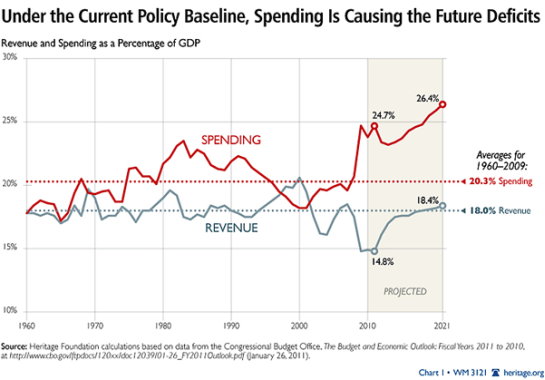 The graph above shows the average spending from 1960-2009 which is 20.3%. Notice how when spending increase, revenue also increase. Unfortunately, this isn’t the case for the situation we are in. We are currently sitting at an all-time high spending of 24.7% whereas our revenue is at an all-time low of 14.8% (The Heritage Foundation). The sensible action to be taken in this situation is to decrease spending, which we obviously haven’t. If Congress is mandated to balance the budget, it would determine which programs are inefficient and would spend money more rationally.

If the balanced budget amendment passes, I believe it would decrease overspending because it would require the president to submit to Congress a balanced federal budget each year. According to Steven Calabresi, a professor at Northwestern University and co-founder of the Federalist Society, Congress should be constitutionally required to hold a vote with the president’s projected budget in 3 months and with the president and Congress having a time period of up to six months to accept a final budget (The American Spectator). If they fail to adopt a final budget during the allocated amount of time, all federal spending except payments on the debt should be frozen.

In conclusion, if we are to solve are national deficit then we should start focusing on the national balanced budget amendment. The balance budget amendment will force the president to submit and a balanced federal budget each year with the president and Congress both agreeing on the final budget. Overall, this will decrease overspending which is the main cause of our increasingly deficit.