Comprehending the pros and cons of issues becoming public problems is the clue to understanding the course of action and agenda setting. In the American system there are issues such as poverty, equity, violence, substance abuse, etc. which continuously encroaches on the system but only few can be regarded as public problems and become a consideration for public agenda. Factors like expansion of participation and issue characteristics are liable for a problem to become public. The study assesses the problem definition process using a threshold model of collective behavior. This is based critically on an individual’s threshold of abstinence from the conditions across society. Expectation of the number of individuals who have already crossed the threshold or are likely to cross it influences the inclination of individuals to cross the non-acceptance threshold. To comprehend this, a theoretical framework to the sexual harassment problem and Clarence Thomas Supreme Court nomination hearings has been utilized. It has been tested with factual data for statistical assessment to an array of collective behavior.

THE PROCESS OF PROBLEM DEFINITION

A multitude of conditions such as pollution, hunger, smoking and child abuse have plagued America through time but there has been no public disclosure to define them as problem. Therefore a divorce prevails between objective conditions and problem definitions. Citizens assess conditions at individual levels. Social influences, values, culture and norms cause an individual to have a neutral or favorable response to the existing conditions. Understanding of objective costs, benefits of a particular condition can vary in individuals and are evaluated accordingly. When the costs of tolerating the conditions become ample, an individual will cross the threshold of public non-acceptance.

The graphical representation of the threshold model is used to understand collective behavior. Here, 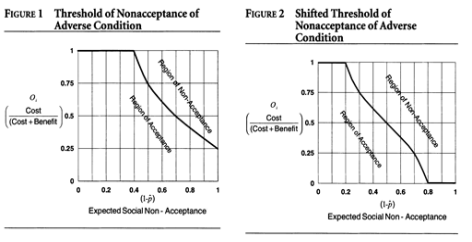 In fig. 1 individuals who privately assess the costs of the condition move to public non-acceptance only if they have expectations that the proportion of social non-acceptance is greater. When Oi=1, proportion of (1-p) is greater than 0.40 and when Oi=0.75, proportion of (1-p) is larger than 0.50. If media educate the public about the costs and benefits of the conditions there will be changed problem definition. As individuals alter their private evaluations, the slope of the function representing the distribution of threshold, changes. In fig.2 if Oi=0.75 then (1-p) exceeds 0.30 and when Oi=0.50 expected (1-p) exceeds to 0.50 to oppose the condition. The media makes the setting more useful to changing problem definition by changing the distribution of thresholds for individuals. In fig.3 a cumulative density function of social non acceptance (the dashed line) is superimposed onto the threshold function depicted earlier. The upper horizontal axis indicates actual social non-acceptance after cost benefit evaluations. 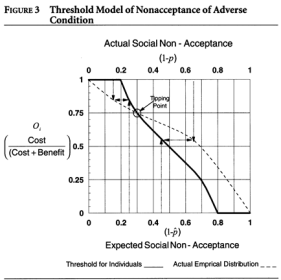 This diagram implies that there is wide gap between private cost-benefit assessment and public positions. The stable equilibria level indicated may alter to change in factual data made available by media, political leaders. Problem reevaluation occurs in an interspersed manner due to the swift shift from point of equilibria to another. Testing the applicability of such models is difficult because of exact data requirements aggregate data may be used to analyze to crossing of the threshold levels of non-acceptance. The importance of the feedback mechanism has also been indicated.

The feminist movements in the late 1970s termed the exploitation of women by men in the workplace as sexual harassment. This was emphasized by women’s groups who started to educate and garner their support. Statistics reveal that prior to the Clarence Thomas Supreme Court nomination hearings; sexual harassment in workplace was common in America. The Thomas nomination hearings in September and October 1991 drastically altered the political scenario on the issue of sexual harassment. Thomas, a conservative African American, a member of the US Court of Appeals for the District of Columbia was nominated as a Justice of the Supreme Court. The Senate Judiciary Committee held eight days of hearing on the nomination. The nomination was sent to the full Senate without a recommendation. Prior to the scheduled vote, the National Public Radio broadcasted a story that spread rapidly. Anita Hill, a colleague of Thomas alleged sexual harassment against him. Intense pressure from public groups and interests culminated in the postponement schedules votes to investigate charges. Since the hearings were televised nationally, Americans became more educated and aware of the issue. The hearing ended with public opinion swaying in Thomas’ direction and he was confirmed by a narrow margin as a Supreme Court Justice. Simultaneously it was a failure of the women’s movement to remedy the issue of sexual harassment and it would be tolerated and those making the allegations failed to produce change. The focus on the issue enhanced citizen mobilization enhanced.

This analysis has amalgamated the individual evaluation of costs and benefits with data and social forces resulting in a dynamic change in collective behavior which is best illustrated by using threshold model of collective behavior and distribution of individuals’ thresholds of non-acceptance on the conditions in society. The application of this was explained through the Thomas Supreme Court Nomination hearings. Focus of media and public resulted in more charges, more successes and increase of media attention. Thus in conclusion it can be said that is there is a pre-existing condition that many find privately costly, with widespread public acceptance, the system is ready for a metamorphosis. Since there is a multitude of such conditions prevalent in America at one time and disturbances are likely to occur and changes in the American political system will be present always.