Introduction to the problem and topic

Triaging pediatric patients is a difficult and challenging task as under-triaging could lead to sentinel events and medical errors. Since pediatric patients are more susceptible and less expressive than adult; they deteriorate quickly and many of their signs and symptoms could go either unnoticed or non-prioritized. The increased influx of pediatric patients in ED and changing trends of trained staffing could result in patients being under-triaged or missed resulting in misallocation of limited resources of ED.

Numerous scores have been initiated to calculate the severity of illness in children, but all scores have either been introduced in ICU or critical care units. Since Emergency Department serves as the first door to the hospital, it should also have a scoring system so that patients could be sorted accordingly and care is not compromised. WHO has introduced ETAT guidelines for pediatric triage in emergency department but it could only be implemented after proper training and education of staff.

A sign of Inflammation in sick children (SICK) score, created by Thompson, has been implemented in ED and is calculated using baseline vital signs and 4 important assessment questions. Since easy to calculate it can be implemented in ED without any specific training as vital signs are taken at the triage and the remaining parameters are verbally assessed but not documented. With this project, if significant sick score could be introduced, children triage could be made efficient and effective.

Measurement of vital signs is a routine practice in all triage scales utilized in different hospitals for children visiting emergency department. On previous occasions, it has been seen that a lot of under triaging and over triaging has occurred resulting in missed priority levels of children and patients either being missed or not diagnosed appropriately. On two occasions, oncology pediatric patients were under-triaged resulting in sentinel events of mortality of those children in ED. It is not only important to monitor vital signs at triage but triage staff should be able to calculate severity score so that appropriate allocation of patients could take place. Currently, this hospital utilizes ESI priority system to allocate patients in ED, however, it would be interesting to observe the relationship of SICK score with the outcome of patients and compare it to the Priority levels.

Vital signs play a very important role in triaging and disposition decision making of pediatric patients. Respiratory rate, color, nasal flaring all are indicators of pediatric clinical condition, however, pulse oximetry is a non- invasive technique of ruling out the severity of illness in pediatric patients. In a study, pulse oximetry measures were taken to identify the change in treatment plan and decision making of physicians. For 305 patients with Sao2 values less than 95%, the clinicians ordered 81 additional diagnostic tests for 62 patients (20%) and 39 additional treatments for 33 children (11%), and changed or added diagnoses for 25 children (8.2%) (Mower, Sachs, Niscklin, & Baraff, 1997). Of this same group, clinicians admitted 50 (68%) children after rechecking the oxygen saturation, whereas 23 children were discharged without having their pulse oximetry rechecked (Mower, Sachs, Niscklin, & Baraff, 1997).

Furthermore, mortality levels could also be predicted with the vital signs and conscious levels of pediatric patients. Among 1133 patients, abnormality in heart rate and respiratory rates had no effect on the mortality of patients but mortality increased as the age of pediatric patients decreased with Odds ratio being 5.2, 15.4, 42.6, 57.0 and 98.3 (Kumar, Thomas, Singhal, Puliyel & Sreenivas, 2003).Unlike heart rate and respiratory rate, abnormal blood pressure, oxygen saturation and conscious levels were found to have a significant (p-value < 0.001) relationship with mortality of pediatric patient (Kumar, Thomas, Singhal, Puliyel & Sreenivas, 2003). On calculation of scores, it was identified that a children with higher scores had a higher odds ratio of 724 time death in hospital as compared to children with low odds ratio (Kumar, Thomas, Singhal, Puliyel & Sreenivas, 2003).

The aim of this project is to redesign the triage policy for paediatric patients and all those paediatric patients with higher score will be prioritize earlier for proper disposition and early management, so as to further improve the patient satisfaction and morbidity/mortality outcome.

Permissions were taken from ED Clinical Manager and ED Head Nurse to introduce the data collection forms (already approved by ERC AKUH) on the main counter to be attached in the file of all pediatric entries. The Unit Receptionists were informed by Manager and HN regarding the forms and reinforcement was provided by clinical student. E-mails were sent to the rotating PGME pediatric residents and pediatric ED faculty members regarding a brief of the study and requesting for filling of forms. A box was introduced in the pediatric area near the working desk of doctors for collection of data forms. Since the study was already funded by an international agency, therefore, the photocopies of the forms were done by the preceptor as per the need identified by the clinical student.

The collected data was entered in SPSS software and codes were given to the categorical data. The sick scores were calculated using software provided by the preceptor. The total forms collected during the three week time was 185 forms but only 100 were included as the remaining had missing information (Diagram 1) 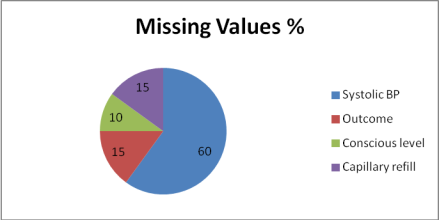 The descriptive statistics of the variables revealed mean SICK score of 1.89 and a standard deviation of 0.98with the range between 0.00 – 5.10. Other variable statistics are defined in Table 1.

As displayed in Table 2, discharge patients accounted for 61% of the population and admission were 39%. It could also be noted that 38% patients lie in the age range 1-5 years and minimum percentage of 6% could be seen in the age range <1 month.

On calculating the odds ratio (Table 3), it was found that SICK score had higher odds of 2.123 of patients being admitted to the hospital. Along with this, capillary refill also has higher odds of 2.46 to predict the admission outcome of patient.

Surprisingly, triage category and conscious levels were found to have no effect on the odds of outcome – indicating either discrepancies in the assessment tool of the study or the training of the triage staff. Consciousness plays a very important role in decision making of the patient but the results of this study are directing towards consciousness level having no effect on the odds of the outcome – which could be an error of the assessment tool. Though the model was 71.7% accurate in predicting the outcome of patient but the results are also implying towards comparing the assessment tool used in the Indian SICK score study and the tool used in this project.

This project has identified the importance of calculating SICK score in identifying the level of severity of illness in pediatric patients for appropriate triaging and allocation in emergency department. It also indicates that other than the baseline vital signs capillary refill should also be initiated at the triage as on an individual level it has higher odds of determining the outcome of patients. But the results also suggest few errors either in the tool formulated or the triage staff training which needs to corrected before the final study is initiated. Missing values was also a major problem as a lot of forms and patient data had to be removed as the forms were not being filled completely. Recommendation would include comparing the sick score with another simpler scoring system like TOPR and also identifying the relationship between SICK score and the mortality of pediatric patients.