Depression and Anxiety in Older Adults: Are there gaps in current knowledge regarding diagnosis and treatment?

Mental health problems in older adults can cause a massive social impact, often bringing about poor quality of life, isolation and exclusion. Depression is one of the most debilitating mental health disorders worldwide, affecting approximately 7% of the elderly population (Global Health Data Exchange, 2010). Despite this, it is also one of the most underdiagnosed and undertreated conditions in the primary care setting. Even with estimates of approximately 25% of over 65’s living in the community having depressive symptoms severe enough to warrant medical intervention, only one third discuss their symptoms with their GP. Of those that do, only 50% receive treatment as symptoms of depression within this population often coincide with other later life problems ( IAPT, 2009; World Health Organisation (WHO), 2004).

2.1: Depression and Anxiety in older adults

Many misconceptions surround ageing including the fact that depression is a normal part of the ageing process. Actual evidence indicates that other physical health issues often supersede the presentation of depressive symptoms in older adults which may suggest that the development of depression is influenced by deteriorating physical health (Baldwin, 2008; Baldwin et al, 2002). Depression may present differently in older adults in comparison to adolescents or even working age adults. Although the same disorder may be present throughout different stages of the lifespan, in older adults certain symptoms of depression may be accentuated, such as somatic or psychotic symptoms and memory complaints, or suppressed, such as the feelings of sadness, in comparison to younger people with the same disorder (Baldwin, 2008; Chiu, Tam & Chiu, 2008). O’Connor et al (2001) carried out a study into ‘the influence of age on the response of major depression to electroconvulsive therapy’ and found that when confounding variables are controlled (age at the beginning of a study), there is no difference in the remission rates for depression in both younger and older adults, however, relapse rates remain higher for older adults. Backing this up, Brodaty et al (1993) conducted a qualitative naturalistic study into the prognosis of depression in older adults in comparison to younger adults and again confirmed that the prognosis and remission for depression in older adults is not significantly worse than for younger adults. However, the rigor of a qualitative naturalistic study is argued by proponents as being value-laden in nature, while criticisms of this study approach highlight it as being subjective, anecdotal and subject to researcher bias (Koch, 2006).

In addition to depression, anxiety disorders are also common among older adults, often presenting as a comorbid condition. In 2007, 2.28 million people were diagnosed as having an anxiety disorder in the UK, with 13% of those individuals aged 65 and over. By 2026, the projected number of people diagnosed with an anxiety disorder is expected to rise by 12.7% to 2.56 million with the greatest increase expected to be seen in the older adult population (King’s Fund, 2008). Despite the prevalence rate, anxiety is poorly researched in comparison to other psychiatric disorders in older people (Wetherell et al, 2005). Of the anxiety disorders, phobic disorders and generalised anxiety disorder (GAD) are the two most common in older people (Bryant et al, 2008). It wasn’t until 1980 that the American Psychiatric Association (APA) published the Diagnostic and Statistical Manual of Mental Disorders (DSM) 3rd Edition which introduced Generalised Anxiety Disorder (GAD) into the psychiatric nomenclature, distinguishing it from other anxiety disorders for the first time (APA, 1980). MCManus et al (2009) estimate that in England alone, as many as 4.4% of people suffer with GAD with prevalence rates between 1.2 and 2.5 times higher for women than men (Prajapati, 2012).

Post-Traumatic Stress Disorder (PTSD) continues to gain increased recognition and has received more clinical interest lately, correlating with individuals from the Second World War, Holocaust and Vietnam Veterans reaching or being well into old age. Despite this, data relating to prevalence rates still remains limited with research tending to focus on specific populations as opposed to community figures, for example, with regards to UK war veterans, approximately 30% will develop PTSD (pickingupthepieces.org.au, 2014). Unfortunately, stigma tends to misrepresent PTSD statistics as sufferers tend not to seek diagnosis or researcher bias is present. Britt (2000) found that many service personal within the military stated that admitting to a mental health problem was not only more stigmatising that admitting to a physical health problem but they also believed it would have a more detrimental impact on their career prospects. Furthermore, Mueller (2009) conducted a study into disclosure attitudes in which it was concluded that these attitudes can strongly predict symptom severity. With this in mind, it is important to stress the importance of practicing within the limits of NMC (2008) code of conduct in which unconditional positive regard must be shown by all nursing staff whilst incorporating a non-bias attitude in practice.

Anxiety and depression comorbidity is well established. A longitudinal study, noted for its beneficial adaptability in enabling the researcher to look at changes over time, conducted by Balkom et al (2000) found that in a random community sample of adults (55 and older), who were diagnosed as having an anxiety disorder, 13% also met the criteria of major depressive disorder (MDD). Adding weight to the evidence of anxiety and depression comorbidity in older adults, Schaub (2000) who also conducted a longitudinal study, found that 29.4% of a sample of older adults in a German community diagnosed with an anxiety disorder also met the criteria for a depressive disorder. Longitudinal studies are thought to vary in their validity due to the attrition of randomly assigned participants during the course of the study, thus producing a final sample that is not a true representation of the population sampled (Rivet-Amico, 2009).

King-Kallimanis, Gum and Kohn (2009) examined current and lifetime comorbidity of anxiety with depression. Within a 12 month period they found 51.8% of older adults with MDD in the United States also met the diagnostic criteria for an anxiety disorder. There is evidence to suggest that the first presentation of anxiety symptoms in older adults suggests an underlying depressive disorder (Chiu et al, 2008). Unfortunately, comorbid anxiety and depression in older adults is associated with much higher risks of suicidal symptoms (Bartels et al, 2002; Lenze et al, 2000) in addition to increased reports of more severe psychiatric and somatic symptoms and poorer social functioning when compared to depression alone (Lenze et al, 2000; Schoevers et al, 2003).

The U.S. Preventive Services Task Force (USPSTF) (2009) states that screening for depression and anxiety in older adults allows GPs and mental health practitioners to look for these conditions despite the service user not reporting the symptoms. However, recommendations on the use of screening tools should be limited to services where there are adequate systems in place to refer service users on for in-depth assessment and treatment as screening without adequate treatment and follow-up is highly ineffective as highlighted by O’Conner (2009) and USPSTF (2009) in separate research reviews. Snowden et al (2009) further stipulates that screening should only be carried out in appropriate settings using approved depression screening tools designed specifically for older adults. Some of these specific screening tools include the Geriatric Depression Scale (GDS) and the 2 –item and 9-item Patient Health Questionnaire (PHQ-2 /PHQ-9). It is necessary to be mindful of the fact that screening tools are not diagnostic assessments, they merely identify the likelihood of someone have depression/anxiety (Snowden et al, 2009) and should be used in conjunction with a clinical examination to aid diagnosis (Chie et al, 2008).

The self-administered Geriatric Depression Scale is the most widely accepted screening tool for depression in older adults, first developed by Yesavage et al in 1983. It is available in both a ‘long form’ and’ short form’. The ‘long form’ consists of a 30-item questionnaire, which asks the older adult to answer ‘yes’ or ‘no’ to specific questions in reference to how they have been feeling over the past week. The ‘shorter form’ (see appendix 1) was developed in 1986 following validation studies of the ‘long form’ and takes approximately 5 minutes to complete. This is often the more suitable screening tool as it can be more easily used by individuals who are physically unwell and those suffering from mild to moderate cognitive impairments such as dementia who may have relatively short concentration spans. It comprises of 15 specific questions from the ‘long form’ that generated the highest association with depressive symptoms. Scores of 0-4 on the GDS ‘short form’ are considered normal; 5-8 indicate mild depression; 9-11 indicate moderate depression; and 12-15 indicate severe depression (Yesavage et al, 1983; 1986).

The GDS have proven to a highly reliable and valid screening tool. One study carried out by Paradela et al (2005) found that the GDS had 81% sensitivity and 71% specificity when evaluated against diagnostic criteria in the DSM-IV. In a validation study completed Sheikh and Yesavage (1986) comparing the GDS Long and Short Forms, both were successful in distinguishing depressed from non-depressed older adults with a high correlation.

Within the NHS, several screening tools are more widely used than the GDS. These include the PHQ-9 (Spitzer et al, 1999), PHQ-2 (see appendix 2) (Kroenke et al, 2003) and ‘Whooley questions’ (see appendix 3) (Whooley et al, 1997). Both the PHQ-2 and PHQ-9 use a psychometric Likert scale format while the ‘Whooley questions’ uses simple yes/no answers.

The PHQ-2 and ‘Whooley questions’ fall into the category of ‘ultra-short’ questionnaires comprising of as little as three, two or one single detection questions. Despite the use of these ultra-short questionnaires being used in practice, evidence from Mitchell and Coyne (2007) suggests that ‘one-question’ screening tools identify as little as one third of patients with depression making them unacceptable and unreliable screening tools if exclusively relied upon. Despite this, there is still support for the use of two and three question screening tools, specifically the PHQ-2 which has been found to identify as many as 80% of individuals with depression in primary care settings (Ross, 2010; Mitchell and Coyne, 2007). As with all good practice, caution should be used when utilising these screening tools are they can present false-positive results (Mitchell and Coyne, 2007).

By comparison, the PHQ-9 is a self-administered 9-item questionnaire aimed at the detection of depression (Kroenke et al, 2001). It value within mental health screening is well known due to the robust evidence surrounding it validity and excellent levels of sensitivity (91.7%) and specificity (78.3%) (Kroenke et al, 2010).

Dementia, along with depression and other priority mental disorders are included in the WHO Mental Health Gap Action Programme (mhGAP). This programme aims to improve care for mental, neurological and substance use disorders through providing guidance and tools to develop health services in resource poor areas.

Synthesis and utilization of empirical research is an important aspect of evidence-based care. Only within the context of the holistic assessment, can the highest quality of care be achieved. 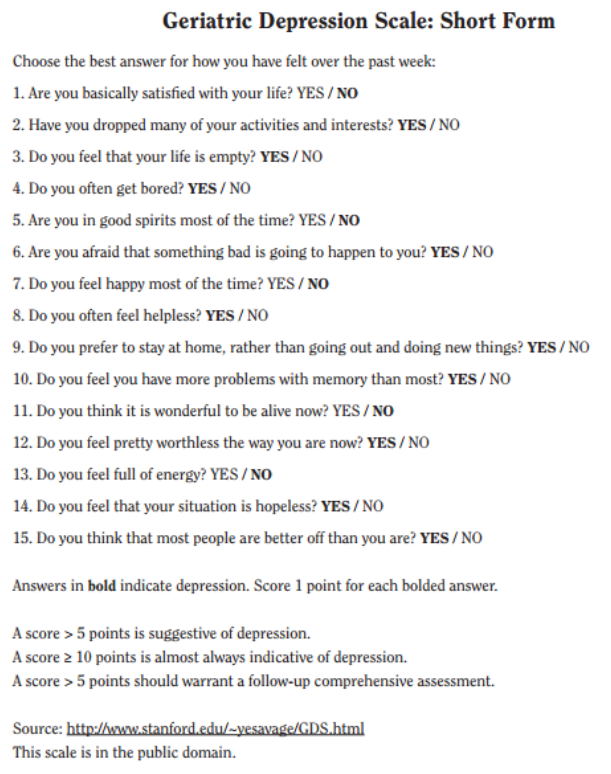