Ewing’s sarcoma is a highly malignant, round cell neoplasm of uncertain origin. It is the sixth most common malignant tumor of bone. It must be distinguished from chronic osteomyelitis and other malignant round cell tumors like lymphoma, metastatic neuroblastoma and small cell osteosarcoma. Most patients are between 10 to 25years old; rarely patients are younger than age 5 years and older than age 40 years. We report a 55 years female who presented with swelling over right shoulder with pain and inability to move right shoulder later diagnosed as Ewing’s sarcoma of proximal part of humerus right side. The earlier diagnosis at this age may help in better management of the condition and prevent further complications and have better prognosis.

Ewing’s sarcoma is a highly malignant, round cell neoplasm of uncertain origin. It is the sixth most common malignant tumor of bone [1]. Most patients are between 10 to 25years old; rarely patients are younger than age 5 years and older than age 40 years. The present report is about rare presentation of Ewing’s sarcoma in a 55 years old female who presented with swelling over right shoulder with severe pain and inability to move right shoulder.

A55 years old female, housewife, was presented with progressive swelling over right shoulder and difficulty in shoulder movements. Swelling was accompanied with severe pain which increased gradually over a period of 6 months.

On examination, she was an average built female with swelling over right shoulder and upper part of right arm. Swelling was of 25x20cm size. It was a solitary swelling with local rise of temperature over swelling. Swelling was tender and variable in consistency. It was a non-mobile swelling. Redness and prominent superficial veins were visible over swelling over right shoulder and upper part of arm (Fig.1). Her hemoglobin levels were decreased and she had elevated erythrocyte sedimentation rate (ESR). Her renal function tests and liver function tests were towards lower normal range. 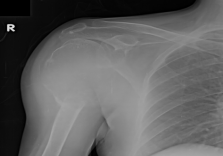 In 1918 Arthur Purdy Stout described a tumor composed of small round cells with rosettes in Ulnar nerve [2], later on it became known as Primitive neuroectodermal tumor (PNET). James Ewing described a tumor of diaphysis of long bones composed of undifferentiated cells and the tumor was radiosensitive [3]. Earlier Ewing’s sarcoma (ES) & PNET were described as two separate entities, but in 1975 Angervall and Enzinger described extraskeletal tumor resembling to ES [4]and Jaffe et al. wrote an article on “the neuroectodermal tumor of bone” in 1984 [5]. Now it is known that ES and PNET show similar translocations and are considered to be ends of histological spectrum of Ewing’s family of tumors (EFT). Analysis of molecular techniques not only provided better understanding of biology but also help in developing better techniques in diagnosis and prospective potential treatment.

EFT comprises 5 to 10 % of total bone tumors and is the 2nd most common tumor of childhood [6]. It occurs predominantly in young adults and children and shows a slight predilection for males [7].75% cases are seen between 10 to 25 years age of life. Youngest case reported so far was of 4.5 months old [8] and oldest case reported was 61 years old. Infancy cases are to be differentiated from metastatic neurofibroma.

In 55% long bones it is usually diaphyseal lesion but also metaphyseodiaphyseal lesion can be seen. Flat bone (pelvis and ribs) involvement can also be seen. Less common sites of occurance are skull, vertebra and scapula.

Ideally core biopsy is done, if repeated attempts of core biopsy fails open biopsy is done. FNAC not recommended in case of Ewing’s sarcoma. Frozen section studies opted in selected cases only as freezing of tissue distorts the morphology. Fixation of tissue is done in 10% formalin. Inadequate fixation leads to loss of antigen, so inconclusive results on immunohistochemistry and also causes autolysis and degeneration of DNA thus making molecular analysis difficult. Ratio of specimen to formalin is 1:10.

It is prototype of small round cell tumor growth. It is composed of sheets of small cells with increased nuclear to cytoplasm ratio. Cytoplasm is scanty, eosinophilic, and detected by periodic acid Schiff (PAS), contains glycogen and diastase degradable. Occasional rosette formation are seen and frequently undergoes necrosis and residual viable cells show perithetiomatous or perivascular distribution.EFT tumor cells can be large with irregular nuclear membrane and prominent nucleoli [9]. EFT cells show membrane expression of CD99 /MIC 2 on immunohistochemistry [10]. Antibody against FLI-1 is seen in nucleus of tumor cells which is specific for diagnosis of EFT [11]. Tumor cells may show neuron specific enolase (NSE), synaptophysin and s-100 protein.

False positive cd99 screening is seen in other cases as well hence CD99, FLI1 and NSE to be positive for diagnosis of EFT/PNET.

EWS-FLI1 fusion is to be targeted and split. Monoclonal antibodies against IGF -1 are being tried as it is associated with EFT growth [13] and PLD 2, PTPL1 are other conceivable candidates as both are highly expressed in EFT [14].

There is no universally accepted staging. American joint committee on cancer (AJCC) suggests that primary bone or extra skeletal Ewing’s sarcoma may be included with their respective bone or soft-tissue sarcoma staging (STS) systems [15]. Although AJCC staging includes metastatic disease and tumor size greater or less than 8 cm; nodal status and grade are irrelevant for ES because it rarely spreads by lymph nodes and by definition of ES is high grade tumor [15]. Most of centers use presence or absence of metastasis at the time of diagnosis, as main tool for planning the treatment.

Alternating cycles of VAC IE every 3 weeks for 48 weeks with local control at 9-12 weeks [20] is to be administered. There is no role of dose compression (decrease in duration of cycles).There is some role of stem cell in preliminary stage of management.

Surgical resection with or without limb salvage followed by Radiotherapy and then chemotherapy is given.

Chemotherapy remains back bone of the T/t for Ewing’s sarcoma, local T/t with surgery &/or radiotherapy has important role in management of ES. The outcome of management is better in localized ES as compared to elusive outcome in metastatic disease or local recurrence.

This case is presented in view of rarity to increase suspicion index for the presence of Ewing’s sarcoma. Early detection of Ewing’s sarcoma as chemotherapy and radiotherapy can limit further damage and progression of the disease can be done.