THE STRUCTURAL AND ULTRASTRUCTURAL PARTICULARITIES OF THE MYOMETRIUM ARCHITECTURE

The morphological aspects of the human non-pregnant and pregnant at due time myometrium were emphasized by the classical histological technique and the electronic microscopic technique. We noticed the structural changes that appear at the level of the myocytes, connective and myometrial vascular structures. Both the stage of non-pregnant uterus and the one of pregnant uterus at due time present structural and ultra-structur­al particularities at the level of the myocytes, connective structures and of the myometrial vascular ones. Key words: myometrium, myocytes, optical microscopy, electronic microscopy

The myometrium is made up of smooth muscular fibers that are internally disposed in layers with circular fibers and externally with longitudinal fibers, in-between them being a layer of coiled fibers that, during the pregnancy, allow the uterus to grow and to be properly irrigated with blood. The myometrium is crossed by numerous blood vessels, with predominant venous type structures, also known as stratum vasculosum. It was ascertained that the uterine smooth muscular fibers play a major role in the physiologic haemostasis, namely in closing the vascular structures at this level. (5)

During the pregnancy both the uterine body and the cervix become violaceae, due to the strong blood irrigation. The pregnancy is featured by the hypertrophy and the hyper­plasia of the myometrium. We may also notice an increase of the number of elastic and collagen fibers that prevent the uterine wall from breaking. The changes of the cervix are less representative and consist of edema and local congestion. (4) The normal evolution of the pregnancy takes place on the grounds of certain important transformations of the endocrine system. Besides the changes appearing at the level of the genital tract generated by the development of the embryo and of the fetus, the body of the pregnant woman will undergo a stage of more intense hormone activity. (3)

The investigations were made on human fresh material taken by the specialty services of obstetrics-gynecology, with the contribution of the anatomical pathology service within “Dr. I. A. Sbarcea” Hospital of Brasov and of the specialized study laboratories of the Cellular and Molecular Medicine Department within “Carol Davila” Medical University of Bucharest.

The fragments of the normal non-pregnant uterus were obtained from surgeries such as total and subtotal hysterectomies.

The fragments of normal pregnant uterus at due time were taken both from the uterine body and from the cervix.

We monitored the structural and ultra structural changes appearing in the uterine muscular fibers, in the connective structures at this level, as well as of the vascular myometrial structures using classical histological and electronic microscopy techniques.

The sarcolemma of the myocytes located at the periphery of the muscle fiber seems to have three layers.

The changes appeared at the level of the sarcoplasma may be grouped in two areas.

At the level of the central area, the changes of the common organelles are being emphasized, such as the rough endoplasmic reticulum made up of several cisterns and vacuoles, of whose membranes ribosomes are being attached at large intervals, free ribosomes and glycogen inclusions, rare flattened sacks and mitochondria presenting a small number of lamella-form christa.

At the level of the peripheral area that occupies the larger part, are the special, organelles, forming the contrac­tile sublayers of the uterine muscular fiber, namely the myofilaments and the dense bodies. The myofilaments, visible at the electronic microscope, are represented only by actin filaments corresponding to the thin filaments of the striated muscle fiber. The myosin filaments are missing, corresponding to the thick filaments of the striated muscle fiber. We noticed ultra structural changes of the uterine muscular fiber, where the myosin appears as dense bodies, noticed as opaque spots, dense at electrons’ flow, elongated, distributed among the actin filaments. (12)

During the pregnancy the myometrium hypertrophies, process that by its rapidity and amplitude, is a unique phenomenon in the normal adult body, accompanied by spectacular reshuffling of the uterine muscle fiber. In these circumstances, the myocytes grow of about 5-10 times, reaching lengths of 500 micrometers. In the same time, they keep their general shape, but elongations appear extensions especially at the ends. (7)Thus, major changes of the main components of the sarcoplasma are achieved. Both the myofilaments and the dense bodies numerically grow. Unlike the myocyte from the non pregnant uterus, the commune organelles occupy large areas in the sarcoplasma and in the peripheral area of the cell. The Golgi complex shows quantity and quality changes, becoming one of the most prominent features of the sarcoplasma. The quantity determinations showed an increase of the glycogen content of the pregnant uterine muscle fiber, of approximately 50 times. (5)

Under the influence of the ovaries hormones, various kinds of muscle connections appear in the myometrium, characteristic to the effect of the estrogens or of the progesterone.

Under the influence of the progesterone, after the ovulation and during pregnancy, we may notice rare light cells, yet, the vacuolated cells dominate, especially after the ovulation. As well, typical spiral cells, with more or less smooth surfaces highlighted.

At the level of the intrauterine connective tissue, although the predominant connective cell is the fibroblast, we may also notice macrophages, plasmocytes and masto- cytes, all these cell types being reduced in number. Both the structural appearance and the activity of the connective cells undergo changes that take place under the hormonal influences occurring in the uterine functional cycle. (2)

We noticed that in the uterus that prepares for gestation, fibroblasts may undergo metaplasia and may change into myocytes. The pregnancy stresses the most the connective cell, in the sense of accelerating in it the synthesis process of the specific macromolecules, such as the collagen and certain products such as the glycosaminoglycanes. (3)

The cervix of the adult woman presents in its structure a large amount of connective tissue, made up of cells, fibres, fundamental substance and a small number of smooth muscle fibres. In the non pregnancy stage, the connective of the cervix seems twice more abundant than the one uterine body. (4)

The blood vessels of the myometrium, of artery or vein type, represent the constant and favourable element to all myomterial cell metabolic changes, in all the uterine functional phases. This way they insure all myometrial local metabolic activity, of synthesis, on collaboration between the myocytes and the surrounding connective, of cell symbiosis changing in pregnancy compared to non pregnancy. (6)

On the myometrium fragments of the non pregnant

normal uterus and pregnant uterus at due time, by means of the classical histological technique we highlight an arrange­ment characteristic to a myometrial area where the smooth muscle fibers are placed in fascicles having different direc­tions and sizes. In between them, we may notice weakly represented connective structures, (fig. 1)

The image shows a myometrial area where the connec­tive structures are well represented in the non pregnant uterus. In the same time, we may notice that between the fascicules of myometrial muscle fibers, blood vessels of capillary and arterioles type are present in longitudinal section, (fig. 2)

Using the technique of electronic microscopy, on a microphoto we notice the detail of an area of the sarcoplasma of the uterine smooth muscle fiber. We notice a large number of mitochondria positioned in groups between the myofilaments and especially in a row in the closest neighborhood and along the dense bodies. Among

the mitochondria there are frequent glycogen inclusions. We may notice the anchoring of the actin filaments of the dense body of the myocyte, (fig. 3)

At an magnifying power of 40x, using the classical histological technique, we observe the smooth muscle fibers, with elongated, euchromatic nucleus, with rich sarcoplasma and a cross-sectioned arteriole. The fibroblasts between the myocytes are rare, with dark, rectilinear nucleus, (fig. 4)

The figure illustrates myocytes presenting a large, oval- shaped, largely elongated, rich in euchromatine nucleus, with 1-3 nucleoli. The sarcoplasma is abundant. Near the muscle fibers, there is a large amount of connective tissue with fibroblasts and numerous connective fibers, (fig. 5)

An observed ultrastructural aspect illustrates longitudi­nally sectioned smooth muscle fibers, with grouped charac­teristic arrangement, namely the thinned part of a myocyte being near the thicker central area of the neighboring myocytes. Between the muscle fibers there are narrow spaces with less connective matrix. The nucleus of the muscle fibers is predominantly euchromatic and the sarcoplasma near the poles of the nucleus contains cellular organelles, besides them we may observe myofilaments and rare dense

odies. The sarcoplasma shows caveolae and dense areas, lear the myocytes we find a fibroblast with large nucleus, ctively euchromatic. Around it, the cytoplasm is loaded dth cellular organelles, among which we notice the rough ndoplasmic reticulum, as dilated, inter-communicating acks. (fig. 6)

Researches based on modern techniques of electronic licroscopy, lead to data related to ultrastructural organization •f the uterine smooth muscle fibers, with its particularities in wo distinct functional moments, non pregnancy and regnancy, in healthy women, with uterus having no

The technique of electronic microscopy highlighted dtrastructural aspects of the smooth muscle fibers, of the connective cells and of the vascular structures of the nyometrium of the non pregnant and pregnant uterus.

Studies of electronic microscopy highlighted various tspects. Thus, the specific functions of the smooth muscle, uch as tension, contraction and relaxation, are considered to )e the result of the coordinated activity of the muscle cells. X/e assumed the existence of a functional syncytium at least or four functional conditions. In the same time, we lescribed the fusion of the neighboring cell membranes, in ;ertain contact points, namely intercellular junctions type »nulla occludens and it may be considered that such ;onnections would represent the morphological fundamen- :als of the functional synctyium. (11) As well, we showed that :he number of noticed contact points is small compared to :he surface of the cell. According to certain authors, the iifferent forms of cell contacts are granted to various imctional states of the same muscle. The muscle connec- :ions thus exist as interdigital cells, on wide surfaces, with anclearly defined cell membranes or as sole, distinct cells.

According to recent studies, the fine structure of myometrium from pigs collected at well-defined stages dur­ing pregnancy was investigated by transmission electron microscopy. The morphology of the pregnant myometrium resembled that in non-pregnant pigs. Thick myofilaments were conspicuous during early pregnancy, unapparent during mid-pregnancy and visible again by days 80-84 and towards 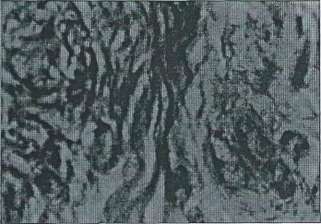 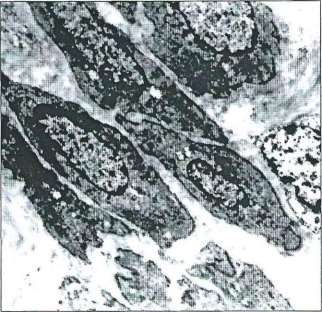 parturition. Gap junctions were extremely rare throughout pregnancy. (8) The researches in the field are ongoing, due to the modern investigation possibilities that, besides the already known investigation methods, mainly refer to the immunohistochemical techniques.