Clinical communication entails a dialogue between doctor and patient, and has been clearly demonstrated to affect many aspects of patient care, including health outcomes. Ideally, doctors are expected to play a dual role – as a source of patient healing as well as a source of reassurance and encouragement (Baker et al, 2011). This study was aimed at assessing the basic clinical communication behaviours of doctors in outpatient private practice in Goa, based on the reports of their patients. Good clinical communication skills include facilitation of the patient’s expression of feelings and expectations related to his/her health care, conveyance of clear information to the patient, and provision of empathy and encouragement. The participants of the study were chosen using purposive sampling. Internationally standardized questionnaires – HPQ (Four Habits Patient Questionnaire), consisting of 15 Likert-scale items, and CAHPS (Consumer Assessment of Healthcare Providers and Systems) was employed to understand the patients’ perception of ‘their’ doctor’s communication. Results were analyzed using total scores obtained. Individual behaviours were also analyzed using frequencies and percentages indicating doctors’ competence in one or more habits over others.

The health outcome of a patient is greatly affected by the manner in which doctors communicate with their patients (Baker et al, 2011). The key to diagnosis and treatment is exchanging information, and communication plays a vital role in building a trusting relationship between doctor and patient that encourages better information-giving and information-getting, both of which are particularly important to enable positive healthcare. Furthermore, communication and trust may influence patient satisfaction, compliance, and coping (Desjarlais-deKlerk and Wallace, 2013). Recognizing the onus on the doctor to ensure satisfied and healthy patients by way of the former’s ability to communicate with the latter, this study attempted to determine the communication abilities of doctors in Goa as reported by their outpatients.

The study included 90 respondents (67 females and 23 males) chosen by purposive sampling from across the state of Goa. The respondents ranged in age from 20 to 70 years, with an almost equal number being below (n=47) and above (n=43) 40 years. Sixty percent of the respondents possessed a graduate or higher degree and nearly half (49%) the respondents answered the questionnaire based on their personal experiences with a General Practitioner. The perceived age of the doctors, as reported by the respondents, ranged from 26 to 70 years, with 63.3% being reported to be in the age range of 40 to 60 years.

Effective communication between doctor and patient is a central clinical function that cannot be delegated (Simpson et al, 1991). The competency of support staff such as nurses and receptionists often influences the quality of health care (Marcinowiczi, 2010) as they are the first point of contact between doctor and patient. Their behaviour can, therefore, influence a patients’ rating of his doctor. Using CAHPS, it was observed that only 40% of the respondents were “definitely happy” with the help received by their doctors’ receptionist (see Fig.1), although more than half (51%) were “definitely happy” with the courtesy and respect accorded to them (see Fig.1). 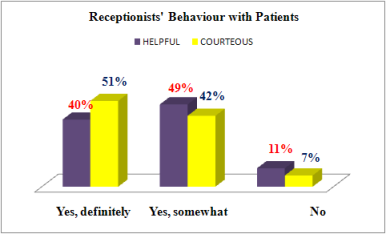 Analyzing a total score of receptionists’ behaviour, only 45.5% of the respondents reported “definite happiness” with the former’s conduct, thus suggesting that support staff ought to improve their communication skills so as to meet patients’ expectations of the healthcare system.

The availability of immediate healthcare is an important determinant of quality in the primary care setting. Availability refers to the ease with which a person may receive care (Marcinowiczi, 2010), and can include factors such as speed of providing an appointment, time spent by the patient in the waiting room (>15 minutes past appointment time), and doctor’s willingness to provide telephonic answers. An analysis of these factors, using CAHPS, revealed that a majority of respondents were quite happy with the rapidity of obtaining an appointment (44%) and obtaining answers to their telephonic queries (46%) (see Fig. 2). However, a moderate percentage (33%) reported having to wait for more than 15 minutes past their appointment time (see Fig. 2). A long waiting time, which can be interpreted as a mode of non-verbal communication, can be quite irksome, and underlines the need for doctors to improve their time management skills.

Respondents’ rating of their doctor

A health system can deliver truly patient-centered care only when patient ratings are elicited, integrated, and honoured. A 10-point scale (from CAHPS) used to measure the respondents’ rating of their doctor revealed that a majority (52.2%) rated their doctor as “Average” (see Fig. 3). This indicates outpatients’ perception that there exists scope for improvement in their doctors’ ability to provide quality healthcare. 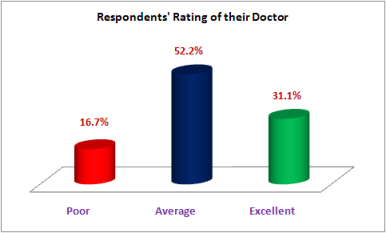 Figure 3. Respondents’ rating of their doctor

Correlation between various parameters and rating of doctor

Assuming that the longer the period of doctor-patient acquaintance, the better the rating obtained by the doctor, a correlation between the two was done but yielded no significant result (r = 0.15, p<0.16), thus suggesting that the respondents rated their doctor independent of their familiarity with him/her.

Analysis revealed that a majority of the respondents (78.9%) visited a male doctor, and literature suggests that females score over males in communication skills. A correlation was thus attempted between the gender of the doctors and the respondents rating of them. However, no significant correlation was obtained between the two variables in this study (r = 0.11, p<0.3).

Research suggests that education of respondents also affects ratings, with more educated individuals giving lower ratings to doctors (Instructions for Analyzing Data from CAHPS® Surveys; 2012). However, the converse was noted in this study as a significant positive correlation was obtained (r = 0.244, p=0.05), indicating that the higher the educational qualifications of the respondents, the more accepting they were of their doctor’s communication abilities. It is a known paradox in medical literature that ‘patients can be satisfied with care that is not high quality and can be dissatisfied with high-quality care’ (Makoul, 2001).

Figure 4. Respondents’ willingness to recommend their doctor to others

In 1996, Frankel and Stein structured the principles of good, clinical communication into a teaching model for didactic purposes: “The Four Habits model – an approach to effective clinical communication”. The habits are: invest in the beginning of the encounter to create rapport and set an agenda (Habit I), elicit the patient’s perspective (Habit II), demonstrate empathy to provide opportunity for patients to express emotional concerns (Habit III), and invest in the end to provide information and closure (Habit IV) (Bard, 2011). The 4 HPQ, consisting of 15 questions divided into sets of 4, was formulated based on these well-researched habits.

Analysis revealed that the respondents rated their doctors well in Habits I, II, and III (see Table 1). However, the doctors were scored low on Habit IV, thus suggesting that they require to further hone their skills in summarizing the consultation by checking the patient’s understanding and negotiating a treatment or follow-up plan (see Table 1).

Table 1. Scores obtained on each HABIT

Good medical communication includes building a relationship, exploring the patient’s perspective, displaying empathy, checking for understanding, reaching agreements on problems and plans, and providing closure (Makoul, 1991). Increasing public dissatisfaction with the medical profession is, in good part, related to deficiencies in clinical communication (Simpson, 1991). This study found that outpatients rated their doctors satisfactorily despite indicating certain communication habits that required improvement. Respondents also indicated that communication skills of receptionists in doctors’ clinics could be improved so as to provide a better healthcare environment. Shifting focus from patient satisfaction to patient experiences will enable doctors to be better communicators, thereby helping to bring about a radical shift in total healthcare experiences.