Myopia (short-sightedness) is the most common eye condition in the world1. In a myopic eye, the refractive power of the cornea and lens causes light rays from distant objects to form a focus in a plane in front of the retina (Figure 1), due to increased axial length (AL) of the eye caused by expansion of the posterior vitreous chamber2. Myopes (usually classified when spherical equivalent (SE) <-0.5DS1,3) therefore experience blur in the distance, and require refractive correction to push the focal plane posteriorly, so it coincides with the AL, and the image is formed on the retina.

Figure 12. Myopic eye. AL and refractive power are out of step, so light rays refracted by the cornea and lens come to a focus anterior to the retina. The resultant blurred retinal image requires optical correction.

As well as a refractive impairment, myopia is progressively being considered as a disease3. The abnormal lengthening of the eye isn’t corrected by the use of optical devices or surgery and is considered pathologic, being implicated in many irreversible, sight threatening conditions, especially in high myopia (usually defined as SE <-6D2,3). The complications of high myopia include myopic choroidal neovascularization, presenile cataracts, myopic maculopathy, staphyloma, glaucoma and retinal holes, tears and detachment3-5. Pathological myopia causes 3% of visual loss worldwide5.

The prevalence of myopia varies across the world depending on age group, ethnicity, geographical location, extent of urbanisation of residing areas and possibly gender.

The prevalence of myopia in childhood and adolescence is particularly important as the earlier myopia develops, the greater the risk of high myopia and pathology later in life3. Myopia prevalence in children and adolescents is reaching epidemic levels in East Asia6, and is rising, with 80% of East Asians being myopic by the age of 187. Amongst East Asians, myopia rates are highest in those in Singapore, followed by Hong Kong and Taiwan and lower in those in China and Australia7. Myopia levels in Europe are lower, but are increasing, at a similar rate to those in North America4 and in the UK the number has doubled in the last 50 years amongst white 10-16 year olds8. There is evidence for higher myopia rates in more urbanised areas7 and some studies show higher rates in females than males8,9.

This overall increase in myopia, and high myopia prevalence is a global health concern with implications for public health policy and the economy10,11, so understanding its aetiology is important if we hope to successfully manage myopia in the future.

Myopia has been shown to have both a genetic and environmental aetiology. Myopia is hereditary12, with children more likely to be myopic if both parents are myopic compared to if one or neither are myopic13. A recent meta-analysis identified 161 gene loci associated with myopia inheritance14 and highlighted how genetics and environment interact to influence myopia development14,15. Increased time spent outdoors is associated with a later onset of myopia, a lower myopic refraction and slower developmentdue to promoting greater viewing distances, causing reduced image blur and increasing the release of dopamine16,17.

Recent research has implicated the role of hyperopic defocus in the peripheral retina as playing a role in the development of myopia. AL elongation in the eye is regulated by localised visual feedback mechanisms across the whole retina, whereby image blur stimulates growth, resulting in a more myopic SE18. The elongated AL of myopic eyes makes them prolate in shape, so the retina is steeper (less myopic) in the periphery19. This means spherical image shells formed by refraction do not follow the full retinal contour and create hyperopic blur in the periphery18 (Figure 2). Some studies have shown that peripheral retinal exposure to this hyperopic defocus, stimulates the eye to grow further, leading to myopia progression. Some research also suggests that peripheral retinal feedback is even more important than central retinal feedback in controlling AL growth and thus refractive development20. 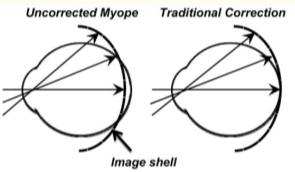 Figure 220. Hyperopic blur in myopic eyes. In an uncorrected myope, the AL is elongated and the spherical image shell falls short of the retinal fovea, resulting in central myopic blur, but is flatter at the periphery, resulting in localised areas of hyperopic blur. In a traditionally corrected myopic eye, the spherical image shell is pushed back onto the retinal fovea, but the peripheral retina is still hyperopically blurred. The hyperopic blur in both cases may stimulate further AL growth.

This dissertation will look at current theories of myopia and its management, examine evidence for and against the hyperopic defocus theory in myopia and whether myopia management involving appropriate peripheral correction based on this theory should be implemented in clinical practice.

1. Leo, S. and Young, T. (2011). An evidence-based update on myopia and interventions to retard its progression. Journal of American Association for Pediatric Ophthalmology and Strabismus, Vol 15, Issue 2, 181-189.

UKEssays have over 500 professional essay writers, ready and waiting to help you with your studies.