“ Music gives a soul to the universe, wings to the mind, flight to the imagination and life to everything”

Head injury (Traumatic Brain Injury) is defined as an insult to the brain, not a degenerative or cognitive nature, but caused by an external physical force, that produces a diminished or altered level of consciousness which results in impairment in cognitive abilities or physical functioning. (American Head Injury Foundation, 2012)

Traumatic Brain Injury can result when the head suddenly and violently hits an object, or when an object pierces the skull and enters brain tissue. Approximately half of severely head injured patients will need surgery to remove or repair hematomas or contusions. Some common disabilities include problems with cognition, sensory processing, communication and problems with behaviour or mental health. (Newman, 2003)

Road Traffic Accidents (RTA) are the sixth leading cause of death in India with a greater share of hospitalizations, deaths, disabilities and socioeconomic losses in young and middle-age populations. It also place a huge burden on the health sector in terms of pre hospital, acute care and rehabilitation. (WHO, 2012)

Almost 10 million head injuries occur annually, about 20 % of which are serious enough to cause brain damage. Among men under 35 years, accidents, usually motor vehicle collisions are the chief cause of death and > 70 % of these involve head injury. Furthermore, minor head injuries are so common that almost all physicians will be called upon to provide immediate care or to see patients who are suffering from various sequels. (Allan H Ropper, 2011)

The advancement in medicine and technology has increased the survival rate of patients with head injury and many of them do have various disabilities. When injury is severe or even minor it lead to large number of behavioural and cognitive problems with the physical disability. Each patient represents a unique disabilities which include physical, visual, cognitive and behavioural abnormalities. Sensory Stimulation Programmes are usually started in the Neuro Intensive Care Unit and should be continued in rehabilitation. This may include tactile, olfactory, visual, gustatory and auditory. (Ellen Barkers, 2002)

Music is a magical medium and a very powerful tool. Music can delight all the senses and inspire every fiber of being. Its multidimensional nature touches the individual’s physical and psychological levels of consciousness suggested that music exerts its effect through the entertainment of body rhythms. (Wilson & Parsons, 2002)

Music has been used as a healing force for centuries. Appolo is god of music and of medicine. Aesculapius was said to cure diseases of the mind by using song and music. Aristotle taught that music affects the soul and described music as a force that purified the emotions. Aulus cornelius advocated the sound of cymbals and running water for the treatment of mental disorders. Music therapy goes back to biblical times, when David played the harp to rid King Saul of a bad spirit. In the thirteenth century, Arab hospitals contained music-rooms for the benefit of the patients. Music therapy began in the aftermath of World Wars I and II. Musicians would travel to hospitals, particularly in the United Kingdom and play music for soldiers suffering from war-related emotional and physical trauma. (Lee Mathew, 2000)

Need for the Study:

Everyday men, women and children suffer head injuries. A fall, a car accident, a sports injury – these everyday injuries can range in severity from concussion to coma. Traumatic Brain Injury can be fatal or, in survivors, can produce persistent problems that significantly affect the livelihood and well-being of millions around the globe. Ninety-five percent of trauma victims in India do not receive optimal care during the “golden hour” period after an injury is sustained, in which health care administration is critical. (Indian Head Injury Foundation, 2010)

The annual global incidence rates of traumatic brain injury ranges from 91 per 100,000 populations to 546 per 100,000. The traumatic brain injury constitutes 70–90% of all head injuries, with rates of hospital treatment ranging from 100 to 300 per 100,000 populations per annum. This high variability in incidence is due to sampling of population ranging from only hospitalized patients to all the patients who visit emergency department. A large number of cases are not treated at hospitals; the actual rate is possibly in excess of 600 per 100,000 cases. There is bimodal distribution of brain injury with peaks at age group 15–24 years and after 65 years. (Centre for Disease Control and Prevention, 2010)

The annual national incidence rates among 28 states of India, the mortality rate per million population due to road traffic accident. A varied from as low as 20 in Nagaland to as high as 216 in Tamil Nadu. States with rapid and high growth in motorization had a higher number of deaths. Nearly half of the total road fatalities were in the 4 states of India, Tamil Nadu (14.5%), Andhra Pradesh (11.4%), Maharashtra (11.1%) and Uttar Pradesh (10.2%). (National Crime Records Bueareau, 2005)

A combination of neurological and neuropsychological deficits seems to contribute to residual handicap in patients with head injury. Neurological deficits include motor deficit (55%), ataxia (49%) and anosmia (46 %) along with memory impairment, poor initiativeness and increasing irritability. Among them very least could return to their occupation and occupational and psychological rehabilitation may found to be more effective. (Zebenlozer and Oder, 1998)

Over the past few decades major advancements have been made in the management of patients with traumatic brain injury and significant improvements have been made in their care in the pre hospital and emergency department settings. Patients with complex, multisystem trauma are admitted to critical care unit and these patients require complex care. (Lind D Urden, 2010)

Broca’s area is important in processing the sequencing of physical movement and in tracking musical rhythms. It is critical for converting thought into spoken words. Scientists speculate, therefore, that Broca’s area supports the appropriate timing, sequencing, and knowledge of rules that are common and essential to music, speech, and movement. The brain areas involved in music are also active in processing language, auditory perception, attention, memory, executive control, and motor control. Music efficiently accesses and activates these systems and can drive complex patterns of interaction among them. (Michael Thaut & Gerald Mclntosh, 2010)

Complementary and alternative therapies are now the fastest growing areas of health care. Music therapy is one of the best and cheapest alternative methods. Teaching the care giver about the auditory stimulation helps to promote care and satisfaction to the patient. For many individuals, music is a source of pleasure and therefore more preferable. Hence the researcher believes that the use of auditory stimulation for patients with brain injury provides the rehabilitative as well as physical assistance with most cost effective manner.

Statement of the Problem:

A Study to Evaluate the Effectiveness of Auditory Stimulation on Motor and Verbal Responses among Patients admitted in Intensive Care Unit with Traumatic Brain Injury at Selected Hospitals, Salem.

Improvement of motor and verbal responses among patients with traumatic brain injury after implementing auditory stimulation along with routine nursing care as observed by Glasgow Coma Scale Score.

In this study it refers to auditory stimulation in which classical instrumental music therapy is given to patients with traumatic brain injury using I pod for twenty minutes for three times a day.

In this study it refers to patient actively moving upper extremities or lower extremities as response towards the auditory stimulation with best motor response 6 in G C S score.

In this study it refers to ability of the patient to respond orally towards the auditory stimulation with maximum GCS Score of 5.

It refers to injury to the brain resulting from external mechanical force such as violent blow or jolt to the head. In this study it refers to patients diagnosed to have traumatic brain injury with GCS between 8 -12.

H1:There will be a significant difference in the pre test and post test motor and verbal responses among patients with traumatic brain injury after administering auditory stimulation in experimental group at P ≤ 0.05 level.

H2:There will be a significant association between pretest scores on motor and verbal responses among patients with traumatic brain injury with their selected demographic variables in experimental group and control group at P ≤ 0.05 level.

Conceptual models are made up of concepts which are words describing the mental images of phenomena and proportions which are statements about concepts. It provides a schematic representation of some relationship among phenomenon.

Ernestine Wiedenbach, (1964) proposed a prescriptive theory for nursing which is described as conceiving of a desired situation and the ways to attain it. Prescriptive theory directs action towards an explicit goal.

The present study is based on the concept of providing auditory stimulation to patients with traumatic brain injury patients. The investigator adopted Wiedenbach’s Helping Nursing Art Theory (1964). This theory, describes the desired situation and way to be attained. It directs action towards the explicit goals. This theory has three factors

It refers to what a nurse wants to accomplish. It is an overall goal towards which a nurse strives. The central purpose of this study is to evaluate the effectiveness of auditory stimulation on motor and verbal responses among patients with traumatic brain injury

It refers to the plan of action for the patient. It will specify the nature of the action that will fulfil the nurse’s central purpose. The prescription of this study is providing auditory stimulation to patients with traumatic brain injury .

It refers to the physical, psychological, emotional and spiritual factors that come into play in situation involving the nurses. The five realities identified by Widenbach’s are agent, recipient, goal, mean activities & frame work.

According to this theory, nursing practice consist of 3-steps, which are all guiding the researcher to attain the desired objectives.

Step – I Identifying the need for help.

Step – III Validating that the need for help was met.

This involves determining the need for help. The investigator assesses motor and verbal response among patients with traumatic brain injury by Glasgow Coma Scale score and demographic variables through the structured interview schedule.

After identification of the patient’s needs ,the researcher facilitate the plan for care and implement it. In this study , the researcher provided auditory stimulation to the experimental group. Wiedenbach theory defines the five realities:

Goal: To determine the effectiveness of auditory stimulation

on motor and verbal responses among patients

This is accomplished by means of validation of the prescription. It is done through the pretest and posttest assessment of the motor function and verbal response among patients with traumatic brain injury. If there are no significant changes in the perceived behaviour we need to reconstruct the experience to ascertain step – I & II. 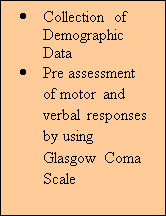 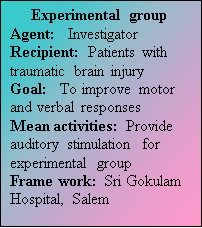 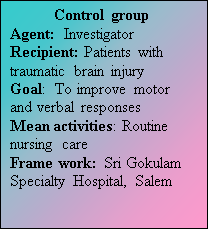 Not included in study

Figure-1.1: Conceptual Frame Work Based on Modified Wiedenbach’s Helping Art of Clinical Nursing Theory (1964) on Effectiveness of Auditory Stimulation on Motor and Verbal Responses among Patients with Traumatic Brain Injury.

This chapter dealt with introduction, need for the study, statement of the problem, objectives, operational definitions, assumptions, delimitations, projected outcome and conceptual framework