Bangladesh has 7 divisions, 64 districts and 489 upazilas or sub-districts [Bangladesh National Portal. Source: http://bangladesh.gov.bd] and share borders with India (about 4,246 km) and Myanmar (193 km).

Each upazila or sub-district consisting of multiple unions, each unions consisting of nine villages (in rural areas)/ wards (in metropolitan areas) and each ward consisting of multiple mauzas (in rural areas)/ mahallas (in metropolitan areas). In metropolitan or sub urban area, unions are replaced with pourashava i.e municipality and city corporation. There are 4550 unions [Bangladesh National Portal. Source: http://bangladesh.gov.bd/site/view/union-list], 56348 mouzas, 11 city corporations and 317 municipalities in Bangladesh [Bangladesh bureau of statistics (BBS). 2014. Statistical pocketbook of Bangladesh-2013: www.bbs.gov.bd].

Following are the scenario to control the HPAI in Bangladesh-

Bangladesh government approved traditional “stamping out” control strategy to fight against HPAI since its first detection in 2007. A basic “stamping out” consist of (a) infection detection (b) affected bird quarantine and (c) culling of affected and in-contact poultry (d) decontamination and (e) surveillance after outbreak. At beginning, the government implemented stamping out in the affected farm and all farms located in 5 KM radius of affected farm. Then government revised this decision due to poultry industry protest and enacted new “stamping out” rule: stamping out in affected farm and all farms located in 1 KM radius of affected farm. Currently stamping out was only limited to the affected poultry farms (1, 2). Early detection and early response were stressed to control the HPAI in Bangladesh, but late reporting and late response usually hampered the early detection and early response process in Bangladesh. To facilitate the early detection, a HPAI active surveillance program through SMS based reporting system was introduced in Bangladesh which was closed because of fund crisis. In addition, avian influenza compensation strategy was adapted for the owner of the culled poultry farmer in June 2008 which was also closed due to fund availability. Under those circumstances the number of informing gradually reduced (1).

Limit in the poultry movement was also enforced but this process was not successful to limit the entry of sick poultry into the live bird market (1).

Islam (2015) stated that though Bangladesh introduced vaccination at certain areas in 2013 and 2015, the effect of vaccination is still need to be assessed (1). According to vaccination policy, vaccination on poultry flock is depend on farmer determination, however permission from livestock authority is necessary as livestock authority is responsible for post-vaccination investigation. In addition, poultry farmer is responsible to pay the immunisation and vaccine expenses. In the trial site, vaccination was carried on parent stock (100%) and commercial layer flock (50%), however vaccination was not done in broiler flock. According to number of farm in the trial site, a lower percentage of commercial layer poultry farms were came under vaccination in Gazipur (33%) and Bajitpur (55%). Trial documented uneven antibody response in between the farm and within the poultry farm. In addition, an unprotective antibody level (

10 recommendation messages (Table 1) has been published by Bangladesh government to prevent HPAI H5N1 in human and disseminate those through TV, radio, print media and Department of Livestock Service led public meeting. Government adopted those recommendation from a UNICEF-WHO-FAO-Japan Government joint publication (3). Shanta et al. (2012) documented the percentage of backyard poultry raiser who trailed Bangladesh Government 10 messages after four yours of first detection of HPAI H5N1 in Bangladesh and stated that government should revised 10 messages to lower the risk of HPAI H5N1 in human population (Figure 1). In addition the author stressed on communication pathway and appropriateness of proposed human behaviour in HPAI H5N1 control program (3, 4). Sultana et al. (2012) has the similar findings and also stated that backyard poultry farmers unable to follow the government message because bringing change in low earned backyard poultry farmer existing behaviour require more time and more financial capacity (5). 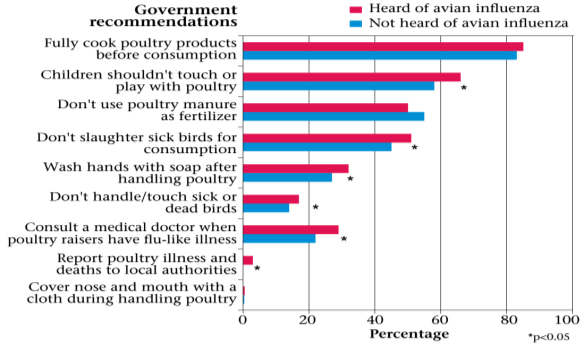 Bangladesh adopted different control measure from basic stamping out technique to vaccination (mentioned in above section) since first detection of HPAI H5N1 in poultry in 2007. There is a very limited alternative control method left except strengthening the current control measure to control the HPAI in Bangladesh.