The study was performed in 172 apparently healthy 1st year MBBS students in the age group of 17-20 years, of the department of physiology at KBNIMS, Gulbarga. Bleeding time and clotting time were estimated by Duke Method and capillary tube method respectively. Blood grouping was done with standard antisera. Finally bleeding time and clotting time of different blood groups were compared and statistical analysis was done.

Blood grouping is very essential as it plays an important role in blood transfusion, genetics forensic pathology and it may have some association with diseases like duodenal ulcer, diabetes mellitus, urinary tract infections, feto-maternal incompatibility leading to haemolytic disease of newborn.1-3

Earlier it has been reported that blood group O was over represented in Caucasian patients admitted with epistaxis compared with the general Caucasian population.4

The objective of this study is to find out if there is a relationship between the ABO blood groups with the bleeding time and clotting time in our population.

This study included 172 apparently healthy 1st year MBBS students in the age group of 17-20 years of the department of Physiology at KBNIMS, Gulbarga, Karnataka, India. Blood groups were determined by mixing the samples of blood with the antisera A, B and D and looking for clumping of RBC’s under the microscope. Bleeding time was estimated by Duke Method and clotting time by Capillary tube method respectively9. Prior to the study ethical committee approval was taken from college authorities.

Statistical analysis was done using SPSS package version 19.0. During the study it was found that most of the students belonged to O group [39.5%] than A [25.5%], B [28.4%] and AB [6.3%] and Clotting time was statistically significant in all the blood groups. Bleeding time remained non-significant. [Table 1]. 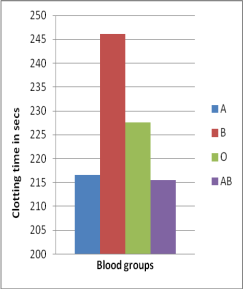 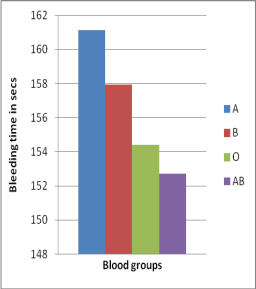 Considerable research has been carried out all over the world regarding diseases and their correlation with blood group. Reddy et al 4 found in their study that among Caucasian epistaxis patients 50.4% of patients were blood group O but among control groups, this was 45.10%.

Another study performed by Daniel et al 8 pointed out that admission for epistaxis was more common among Caucasian than Asian people. Morant AE 5 showed in their study the prevalence of blood group O was more among Caucasians than Asians. (Caucasians 46 versus Asian 31%.) It is seen that persons having any other blood group except O are at more risk of venous thromboembolism. Non O group individuals have higher levels of von Willebrand factor (vWF) and factor VIII (FVIII) 10, 11.

Our study suggests that O blood group is prevalent in more number of students. Clotting time is more in all the blood groups which was statistically significant. Bleeding time did not show any statistically significant change. Further larger study is needed to verify the above mentioned findings. Further study needs to find out if there is any association of this finding in cases of epistaxis in our population.