The Cis Lunar tug system or the Dark Panther spacecraft is a UAV type vehicle. Before each mission the Dark Panther spacecraft will be docked via gateway in Cis lunar space. Once vehicle is ready to conduct an operation spacecraft will separate from the gateway into cis lunar orbit. The Dark Panther will use a series of pressurized cold gas thrusters controlled by a valve on the side of spacecraft to change vehicles trajectory towards low lunar orbit. [1]. Once in low lunar orbit vehicle will stabilize if needed and the Dark Panther will do a brief engine fire to stabilize orbit around the moon. The Dark Panther tug system has doors at top of vehicle similar to NASA’S space transport system or the space shuttle. These doors will open to release different payloads mainly using an autonomous lunar lander to deliver commercial assets and materials etc to the moon’s surface. The spacecraft will then conduct a minimum energy transfer orbit which is also referred to as the homman transfer orbit into cis lunar space [2]. This orbit will require very little delta-v (acceleration) using less fuel consumption. The spacecraft will utilize natural LaGrange points in cis lunar space to park until the gateway moves in an appropriate amount of time to a position that will allow minimum distance of travel from the LaGrange point to the gateway. Doing so will conserve fuel. 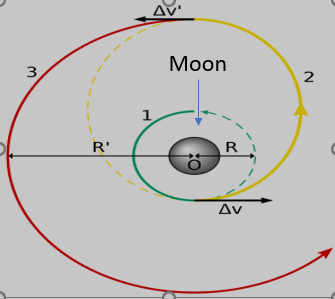 The tug navigation system which would be integrated into the computer control will involve the use of imu and will be calibrated to the location of the gateway. Likewise, the navigation system of the lander on the moon will be calibrated with respect to the imu location of the tug. These systems that are synced to each other and will communicate will thus be able to perform accurate and optimized calculation of location and orbital paths, as necessary [5]. However, use of a gps would require gps satellite(s) around the moon.

The Cis Lunar tug system will carry many important assets, equipment, and space vehicles. The Tug system will carry in payload bay an autonomous lander able to understand and sense surrounding environment on lunar surface. The tug’s lunar lander will have compartments and payload spaces for tools and instruments. Onboard lunar lander will be robotic rovers to collect possible samples on missions to the moon. The rover will need to be able to navigate the moons surface. Computer programs in rover will use mathmatical algorithms including trigonometric equations for navigation in a triangulation-type system[4]. The computer system will generate two different angles and travel in a triangular shape on the moon. The computer system calculates how many miles the rover will travel based on the angels that were generated by computer system. The system will calculate curvature of the lunar surface to adjust rover over long distance travel.

The utilization of the robotics will be included in our tug system. In the payload system of the Dark Panther tug is a robotic arm similar to the space shuttle.The purpose for this robotic arm is to dock or capture and place the tug’s lunar lander or any other type of scientific tools inside payload bay after a mission. A control system will regulate and command the robotic arm functions. A DC motor will also be used to help movement and manuvering in space.

Electrical power is an important componet for the tug system to power the computer systems and microprossors in spacecraft to conduct missions. Inside the Dark Panther tug system is a series of hydrogen fuel cells to generate electrical power inside the spacecraft. The fuel cells are made up of an anode, electrolyte, and a cathode. Hydrogen gas is propelled through anode, once atoms pass anode an electron is stripped by anode and converted into electric current. Once we have current flow electrical energy is generated. oxygen atoms will move through the cathode meeting the ionized hydrogen inside cathode. These atoms will then become H20 and fuel cell will generate water.

During Lunar flight our lunar tug system mandate effective in space propulsion methods to conduct space missions. The Dark Panther tug system will use Plasma and ion propulsion due to itscost efficiency and effectiveness in unmanned deep space exploration. Plasma propulsion is a slow method used on previous NASA unmanned missions to jupiter, saturn and comet Borrelly on past robotic missions. This electric propulsion engine will use Xenon gas for propellent or hydrogen atoms that will be recieved from electrolysis from frozen ice water on moons surface. An electron will flow through a cathode to bombard propellant in an engine this is called the ionization chamber. Atoms in ioniztion chamber will lose an atom becoming ions, inside engine is two electric grids one positive one negatively charged. The opposite charges will attract accelerating charged particle out the engine. In order to prevent positive ions being pulled back towards the outermost negative electric grid. A secondary cathode is place outside spacecraft to ionize particles making propellant negatively charged this will repel charges from negatively charged grids creating thrust.

For NASA’s Space launch system or orion project the projected goal currently is to conduct and achieve the first manned space mission to the martian surface by mid-2030s. Adequete tools and transportation of payloads would be crucial to achieve this mission. Supplying future astrounauts with important tools, food, scientific instruments, and life support tools can be delivered on surface before Astrounauts land on martian surface. The Dark Panther spacecraft can be used as an interplanetary truck system to deliver important instruments to mars. The mission will take months however due to the vehicles 15 plasma engine over time the spacecraft will reach high speeds. Electrolysis will be conducted from near by celestial bodies such as the moons and also possibly the tug’s lander can use asteroids in the asteroid belt as an interplanetary fueling station. the lander will mine and abstract hydrogen for plasma propulsion for the tug system.

lunar surface and in orbit Temperatures can drastically change from temperatures 260 degrees fahrenheit to -280 degrees in absence of sunlight. Thermal protections systems in the Dark Panther spacecraft payload system will be important for the sensetive equipment that may be stored. On the external surface of the Panthers payload bay will be silica fiber materials. These fibers is very efficient in heat absorbtion and heat transfer. Once the heat flow slowly penetrates through silica fibers there is a cold plate under silica fibers.The cold plate is a thin metal box that has multiple layers and channels inside which cold water runs. The cold plate will conduct the heat generated from the sun and convected away from the flowing cold water in the cold plate. Inside the tug’s payload system space blanket or mylar will we used as thermal protection system inside spacecraft to protect payloads within the tug system regulating tempratures inside.

The Dark panther’s main fuel source will be plasma propulsion. Our proposal for fueling the tug is greatly cost efficient and will reduce fueling costs. Instead of launching tons of fuel frequently on the space launch system to the moon we can reduce resupply missions by abstracting hydrogen from moons surface to generate propellant for plasma thruster on the spacecraft. The antunoumus moon lander will mine for water on surface abstracting frozen water in craters on the surface. An electronic hot plate is stored on vehicle lander and will utilize rovers for minning the moon for water. frozen water found will be melted by the electric hot plate and electrolysis begins. an electric current will flow through anode and a cathode while place inside water. Alkali is added to water to help the conduction of electrictiy. The cathode will abstract hydrogen in the electrochemical cell and the anode will store oxygen atoms in anode just like diagram below. The lunar lander and rovers will be equipped with infared spectroscopy cameras to identify substances by the infared wavelengths to help detect H20. 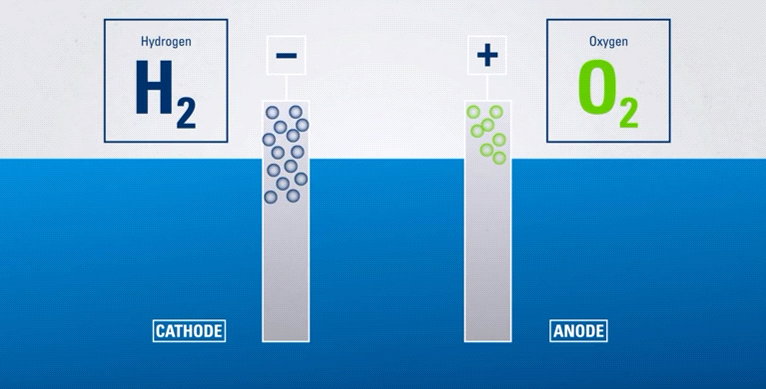