According to the Commission for Communications Regulation (COMREG) (Q4, 2015), household broadband penetration rate for both fixed and mobile services was at 83% which is higher than the EU average by 3%.

Mobile device minutes in communications stood at a massive 73.8% of the market, leaving on 26.2% for fixed line communications. Mobile minutes showed an increase of 1.4% from the previous quarter.

There was an annual increase of 56.6% of mobile users actively using the 4G standard on the same period in 2014.

Subscriptions to mobile networks increased by 0.36% on the previous quarter however broadband subscriptions saw a decrease of 4.5% on quarter three. This is probably due to many providers now bundling a broadband “allowance” in with subscription offers.

Finally in the last quarter of 2015, average revenue per user was on a downward trend compared to the same quarter in 2014. Mobile users spent an average of £24.62 per month in the final quarter compared to £25.00 per month a year previously. Again, this is believed to be a result of package bundling affecting revenue intake according to ComReg (2015)

Structure and Nature of the Current Market

All four (Vodafone, O2, Meteor and 3 Network) of the main providers purport to supply the following to consumers according to ComReg (2015):

All five of the smaller mobile providers in Ireland (PostPhone, Tesco Mobile, Dixons/Carphone Warehouse ID Mobile, LycaMobile Ireland and Blueface Mobile) do not have their own infrastructure networks. Instead they utilise the current main network providers and rent a “mobile virtual network operation” (MVNO) which gives them the ability to offer their own branded retail service to consumers.

An Post PostPhone has entered into an MVNO commercial arrangement with Vodafone to allow its traffic to be carried. Unlike other providers PostPhone does not have a unique prefix and instead effectively resells minutes carried from Vodafone and then differentiates (Re Brands) those minutes at the retail level. PostPhone is available to personal customers only. (ComReg 2015)

Like Tesco Mobile Ireland, LycaMobile has an arrangement with O2 Ireland. LycaMobile offers by the minute rates and bundle packages for subscribers. They do not offer traditional pre-pay or bill pay options. (ComReg 2015)

Blueface Mobile has entered into an MVNE (Mobile Virtual Network Enabler) with X-Mobility Limited, which is a sub-division of Hutchison 3 Ireland. Blueface sells both prepay and post-pay subscriptions to Business Only consumers. Like PostPhone, Blueface is reselling 3 Network minutes under its own brand. (ComReg 2015)

Dixons/Carphone Warehouse ID Mobile is an MVNO of Hutchison 3 Ireland. ID offers a pay-monthly option which comes with a handset (Billpay) over a fixed term and also offers a sim-only thirty day rolling subscription. (Siliconrepublic, 2015)

Expected Technological Trends for the next Decade (2016-2025)

Looking to the future, there are some expected and some predicted advances that will be made. The list is not endless and some of the most useful advances are listed here:

“Currently, smartphone ownership is biased towards the younger age groups but with the increasing penetration in the market, this could very well change in the near future.” (Red C, 2012)

SO, what do people in the 18 to 25 year old segment use their smartphone for?

According to the latest survey from Thinkhouse (2015), the Youth Communications Agency, the following statistics ring true:

It is also stated in this review by Thinkhouse media that the primary use of a mobile phone for this segment is to send text messages. However this is contradictory to the research submitted by ComReg (above). ComReg state that SMS sending is down some 43% from 2011. The difference can be explained by the arrival of apps that send messages for free such as Facebook Messenger and Viber, among many others. (Inner-Active, 2011)

Market Research Suggestion for the Next Five Years

Tel-Eir should look to glean as much information as possible before deciding on phone tariffs, prices, bundles and pay as you go or bill pay options.

Having thought about the best types of research and studied many methods, it has been decided to advise Tel-Eir to carry out “Personal Interviewing” (Kotler et al, 2012) initially in order to get an understanding of what the public:

This information is required so that Tel-Eir’s marketing staff can use the information on Buyer Decision Making processes to form an educated opinion of what angle to enter the market at.

By sending personal interviewers out into the busy thoroughfares of the five main Cities in Ireland, it is expected that a lot of accurate opinions can be acquired and from that information Tel-Eir will be better placed to formulate a strategy for market entry.
Ongoing Research

Going forward, it is believed that Tel-Eir should continuously keep an eye on both competitors’ movements and new offers in the market and also on the changing demographic that are purchasing its product.

It is advised that every year, Tel-Eir should partake in:

Having already completed some market research on current mobile phone network operators it is felt that Tel-Eir should not use a Mobile Virtual Network Operation (MVNO) in which Tel-Eir “piggybacks” upon a network that is currently owned by a larger company like Vodafone for example. Purchasing statistics for such network providers is not good and it is felt that only by gaining its own licence can Tel-Eir truly become competitive in the market. (Irish Independent, March 2016)

According to research, Tel-Eir’s targeting of the youth segment (18-25 Year olds) should include the following attributes:

1. Offering Both Bill Pay and Pay as you Go Bundles

This should take the form of long term Bill Pay contracts with an offer of a free handset (slightly outdated) or a cheaper handset (a little more recent) or an expensive handset (latest on the market).

It is also advisable that the price of the handset while signing up for a long term bill pay contract should be connected to the monthly contract price. As an example, if one wants a handset from the latest range but with a cheap monthly contract, then one pays more initially for the handset. However, if one wants an expensive phone with an expensive monthly contract, then the phone could be offered free of charge, depending upon the length of contract signed up to. It is advised that for the latter, a two year contract be set as the minimum. In this way the cost of the handset can be recovered over the duration of the contract.

It is advised that Tel-Eir offer a month by month rolling contract. This new style of attracting customers has proven popular amongst the low waged and unwaged. Tel-Eir should offer an internet allowance and perhaps a text message (SMS) allowance with this. As SMS is decreasing in popularity, offering unlimited SMS messages will appear to be a good offer but in reality will not be used as much as it may have been previously.

Tel-Eir, in order to be competitive should offer Pay As You go top up options in the following amounts:

It should be allowed that all top ups and bill pay options can be paid by Credit/Debit Card and that a facility exists for both online payment and direct debit.

(All above information gained from ComReg, 2015)

The variety of handset offered is paramount in importance for the sale of Tel-Eir’s network product. The profit is in the sale of the different tariffs and bundles. However that sale will not happen unless Tel-Eir sells the hardware that the public have come to expect and associate with popular and successful network brands.

Therefore, it is advised that Tel-Eir sell all of the latest handsets from all of the most popular manufacturers.

It is also advised that Tel-Eir try to get exclusive rights to an upcoming handset from a major supplier. Even short term exclusivity would be beneficial.

From research already collated, it is clear that connection to the Internet is of paramount importance to the public. There are so many things that a mobile phone user can do from being connected to the Internet. This is also paramount in lessening the use of the network throughput from SMS messages. Using the Internet will allow people to send instant messages using apps through third party servers, lessening the load on Tel-Eir’s hardware.

Having a good Internet allowance package available to them, will give the public the freedom to use their phones as they have been used to with the current major brands on the market. Tel-Eir should look to compete very favourably in this area. (The Atlantic, 2014)

As users turn to third party “apps” for sending instant messages over the Internet, they are turning away from the traditional “paid for” SMS messages. It appears as though this trend will continue into the future. As a result of this, Tel-Eir should offer generous SMS bundles with offers secure in the knowledge that these will sell a product to a potential subscriber but once sold, will not be used very much at all. It is all about the offer appearing to be good value for money.

The above statement is the most important thing to keep in mind when presenting Tel-Eir’s new product to the market.

With the above tenets in mind therefore, Tel-Eir should pay particular attention to the following:

From the above presented problems one must come to the conclusion that “Communication” is the key to positioning and promoting a product. How does a company get from positioning to communication? See Fig 1.1 (next page)

Therefore using the image in Fig 1.1 the company must decide upon its best avenue for answering these questions.

Finally, Tel-Eir will pay particular attention to its selling statement for consumers. The statement will include the most important variables:

The positioning statement will take the format of: 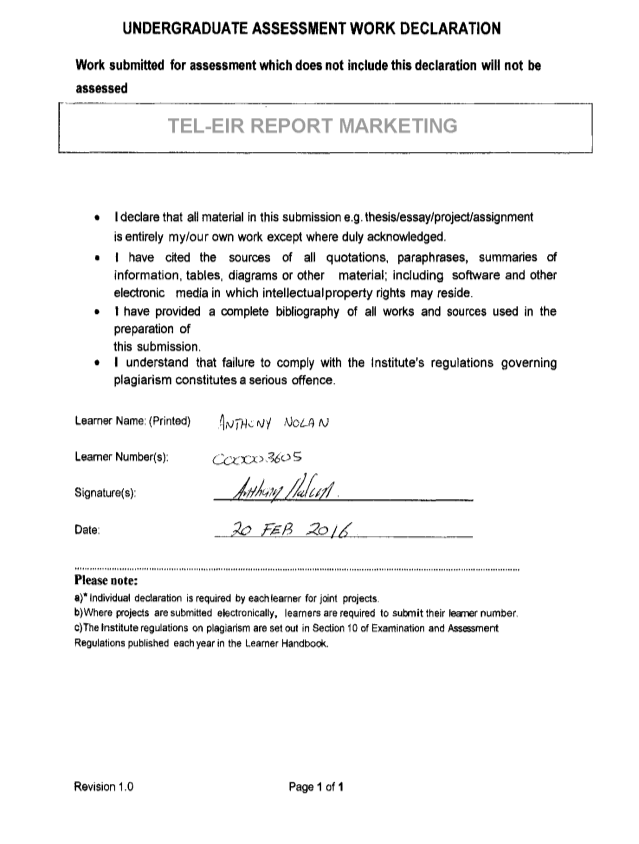