Computer Communication plays vital role to connecting two different devices and share the common information with each other and this information can be anything like text or video. To communicate from one computer to other it required some essential elements i.e. sender, receiver, medium, message and protocol.

The Main parts or components of Data communication system are as Follows:-

The initial stage of communication is starts with sender. Sender is the person or machine who sends the message or start communicate with other devices. Sometime it is also called as transmitter.

The secondary stage is creating message or idea and statement is to be communicated. A message can be verbal, text, number, picture etc.

Receiver is the person or the device which receives the message send by sender. The receiver can be a computer, printer, email or telephones etc.

Protocols can be defined as a gathering of strategies which oversee correspondence of information between the PCs. Some protocol which are very commonly used in communication are HTTP(Hypertext transfer protocol), FTP(File transfer protocol), SSL(Secure socket layer) , TCP(Transmission control protocol),PPP(Point to point protocol).

Transmissions is transferring information between two devices. Basically there is three modes of transmissions i.e. simplex, half duplex, full duplex and these transmissions modes can also called as communication modes. However unicast, multicast, broadcast is also consider as transmissions.

Identify the types of transmission for the following use cases:

(A) Describe the difference between packet and circuit switching.

When the two machine communicate over a specific communication path, it is called as circuit switching. There is always required pre-described route from where data should be move and no other data is allowed. In circuit switching to transmit the data firstly circuit must be established so that data can be transmitted.

There are three phases from which all the application using circuit switching have to pass through:

Circuit switching was intended for voice applications. Phone is the best reasonable case of circuit switching. Prior to a client can make a call, a virtual way amongst guest and call is set up over the system. 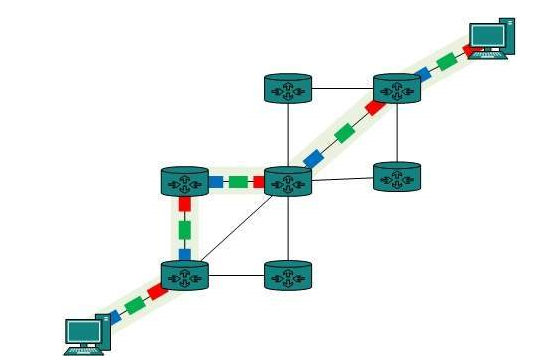 In packet switching the whole message is separated into small pieces is known as packet switching. The switching data sum up in the header of each packet and exchange separated. It is always easier to all devices in the network which are intermediate with each other to store small size packets. As we can see in the figure packet can follow any path to reach the destination. 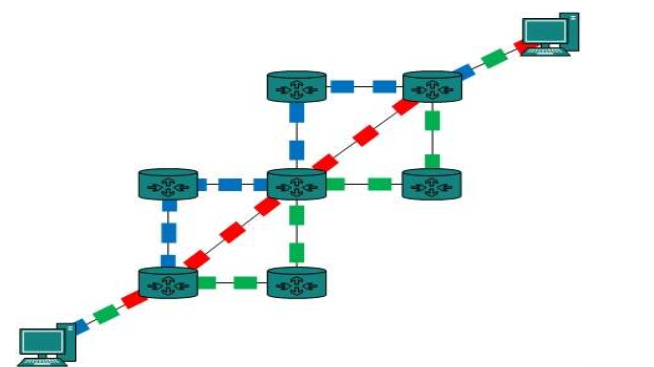 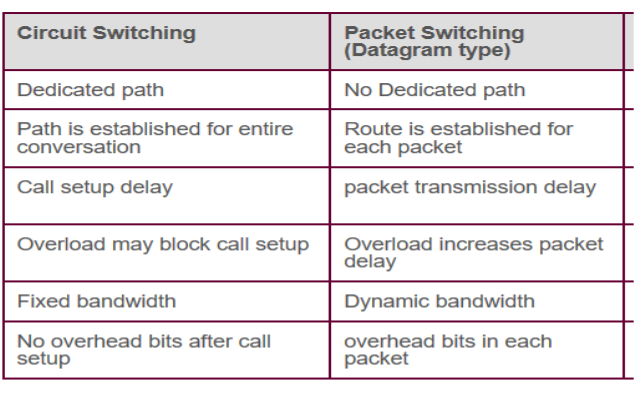 TDM is applied principally on digital signal yet can be applied to analog signal also. In TDM the common channel is isolated among its client by the method of the time slot. Every client can transmit information inside the given time slot only. Digital signals are isolated in frames, proportionate to time slot i.e. frames of an ideal size which can be transmitted in given time slot.

Multiple data signal can be transmitted over a solitary frequency by utilizing code division multiplexing. FDM isolates frequency into the small channels yet CDM permit its clients to full bandwidth and transmit the signal all the time utilizing remarkable code. CDM always uses orthogonal codes to spread signals.

Light has the diverse wavelength (colors). In fibre optic mode, various optical transporter signs are multiplexed into an optical fibre by utilizing diverse wavelengths. This is a simple multiplexing method and is done adroitly in an indistinguishable way from FDM, however, utilizes light assigns.

The term Latency to any of a few sorts of postpones commonly brought about in handling of system information. A network connection that phases a little delay time is knows as low latency, on other side high latency is totally opposite of low latency in which network experienced long delay.

Throughput is the bulk of traffic which a network can tackle at any one time. For example higher the lanes on the motor way it will accommodate higher traffic as similar in the network if the bit rate is higher than it will transfer the data at higher rate but responding time would be the issue if the response is slow then your network might be not having the enough throughput.

“Bandwidth is defined as a range with in a band of frequencies or wavelengths” (Webopedia, n.d.). Bandwidth describes the speed rate of the network and the maximum data is transfer if the bandwidth of the network is higher.

Jitter is basically delaying of packets to reaches its destination at different time and the order in which packets were send may be disorder. In other words loss of voice packets while communicating with other person is caused by the jitter.

“Response time is the elapsed time between an inquiry on a system and the response to that inquiry”. (Techopedia, n.d.)

Response time is the time that shows the users are accurately exchanging the information or devices are connect with each other.

Metropolitan Area Network (MAN) usually cover the larger area as compared to LAN. It will cover the cities or small towns or organization to provide higher speed of data transmission. MAN is used when you want to connect two or more computer to communicate with effective speed. The technologies used in MAN is ATM (Asynchronies Transfer Mode), FDDI (Fibre Distributed Data Interface) etc.

Wide Area Network (WAN) is usually cover higher geographical are like cities, countries, towns. WAN is the mixture of the LAN and MAN which are interconnect with each other so that the user who wants to communicate from different places are able to send data or information at higher speed. WAN is connected through satellite, public network etc. WAN is usually very expensive as compared to other networks.