The Exchange 2003 built in Open Relay Filter or Real time Black hole List capabilities and DNS Blacklist And supplemented later Microsoft Exchange smart Message Filter ( IMF ) And to provide Protection of the highest and most powerful anti-spam It used smart screen technology from Microsoft and for this reason he became in 2004 ( IMF )  part from Exchange 2003 in SP2 .

With Exchange 2007 and 2010 was able to Microsoft Corp . to develop and improve the exchange of capabilities to fight spam by providing connection filtering , attachment filtering, sender ID,  content filtering , And other features like  sender reputation and IP allow / block lists from out the box , on server edge  or edge server .

Also on transport hup server could enabled All these features , With the exceptions of attachment filtering and connection Which means that most start-ups and small organizations do not have the capacity and the means or sufficient volume of e-mail To justify the cost of installation and maintenance of complete network with edge transport hup , and can almost take advantage of the full capabilities of the anti-spam

Although it has been providing good protection level and for some reason was never in built anti malware protection . Usually supplemented Features by using third-party software or appliance , or Microsoft’s own software and anti malware also anti pam .

Exchange 2013 offers classes ways to curb Anti spam , And also provides filtering  anti spam Through the use of transport agents With built-in transport agents to anti  spam , Without adding any changes in the exchange in 2013 .

When it is not the organization some kind of third party anti-spam or server transport agents Anti spam agents usually enabled on mailbox servers filtering appliance .

The following factors anti spam in exchange 2013 It is not installed by default, but are available in the transport service on the Mailbox server , According to Anti-Spam and Anti-Malware (2013) :

Some organizations have usually proven anti-spam agents in the transport service on the mailbox When all mail accepted without spam filtering , Until that there is exchange of works on messages before they reach your inbox , such as ( the exchange of 2010 ) , Inbox recognize the agents anti-spam X-headers  And which added from  exchange  , Some messages that contain the X-headers Pass without examination . 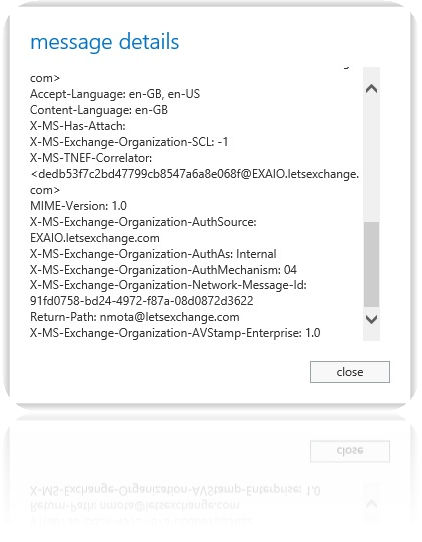 It is typically used in the exchange of three ways Although he is capable of providing excellent features or capabilities to anti spam and ease of administration Where organizations can buy EOP from Microsoft where they help to protect the mail from intrusion and malicious software :

The benefits of using EOP versus Exchange 2013 :

In conclusion, the fight against spam in the exchange in 2013 did not solve  any real practical changes sins Exchange  2007 and Exchange 2010 until this day  .