Abstract — — The paper is concerned with the Android-Arduino communication and Computer – communication by integrating mobile wheel robots with X-Bee communication protocol. Arduino controls tasks such as obstacle and collision avoidances following, autonomously movement, and indoor localization of group robots are implemented toward an autonomously control of robot. Mobile robotics is a technology and a research area where we witness tremendable advances for the last decades and it finds application in areas like agriculture, medical services, hazard environments, space explo-ration, military, intelligent transportation, social robotics, and entertainment. XBees provide wireless communication. As a system, the advantages are very obvious compared with other technology.

Robots may interact in the same location as users control them from any place in the world using internet and wireless networks for this purpose. Sensor based approach uses various kinds of sensors such as IR sensors and ultrasonic sensors.IR sensors are generally used for measuring the difference in reflectivity of surfaces depending on the properties like color, roughness. Ultrasonic sensors are used to measure the distance to an object. Robots are built to navigate using these out puts according to the application. The idea is to design the Sensor platform with accurate angle control this continuously collects the distance data in an automatic way where the Robot is controlled by Android app and transfer ultrasonic sensor data to PC. An idea is to build an actual robot that is subject to wireless operation from a PC or a Android. It reads sensor and robot data from file and to Generate map of surrounding environment. Robots are capable of interacting with the objects. The design in this paper comprises of the chassis will also house the PCB and proximity sensors that will continually provide feedback to the user. Proximity sensors are able to assist the operator in navigating across inhibiting terrain even if communication link with the operator is broken. Robot automatically stops if it detects an obstacle. Due to the Android and Arduino combination, the robot can interact with the person and provide an easy development platform for future improvement. The paper[1],[2] deals with the route navigation and the Application of Zigbee and [3],[4],[5] and [6] emphasis task scheduling on low cost arduino and distance measuring sensors.

Wireless sensor network system will not only reduce the system cost in term of facilities setup and labor cost. It also provides flexibility in system in term of distance or location. The fundamental design and implementation of ultrasonic sensor based robot on Android/PC featuring a XBee based technology[1] The developed platform is cost-effective and as well as the effect on reducing energy consumption. The platform consists the components Android phone, Arduino mega adk, Motor Driver shield, ultrasonic sensor[5], IR sensor and Xbee module. It features the Atmega16U2 programmed as a USB-to-serial converter. The Arduino programming is very simple; uses its own language based on the popular C high level programming language and supports all standard C and some C++ functions. The operating voltage of the board is 6 to 20 volts. The recommended range is 7 to 12 volts. This is designed to control a robot with an aid of Android application[6]. Xbee is interfaced to the control the robot using android application. Where one end of xbee is interfaced with android application which is used to transmit the commands and receiver end robot is attached which is used to control in all directions.

The X-bee modules allow serial links of TTL signals on distances of 30m indoors, 100m outdoors with line of sight which would be enough to control the electronic wheelchair. IEEE 802.15.4 standard for Zigbee operates in the band: ISM (Industrial Scientific and Medical), 868 MHz in Europe, 915 MHz in the U.S. and Australia, and 2.4 GHz in most jurisdictions around the world[2]. This technology is simpler, cheaper and has lower power consumption than other WPANs such as Bluetooth. The problem is to the need to detect the obstacle in the path of the robot, to sense and find alternative paths of the robot.

The Ping which works by sending out a burst of ultrasound to detect the closest object and listens to the echo after hitting the object. The short pulse from the Arduino board is send to trigger the detection, and then listens for a pulse on the same pin using the pulse. The second pulse duration is e the time taken by the ultrasound to travel to the object which is equal to the time taken to travel back to the sensor[4]. This time can be converted to distance by the velocity of light. We use IR transceiver and comparator IC LM324 for detecting the obstacle. The component deals with two major issues. They are as follows:

1. It avoids the collisions with walls and other obstacles.

2. It avoids the prototype be fallen down from the steps on its way. 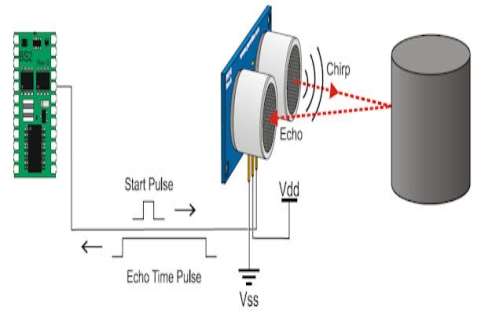 Android is a Linux based Open Source operating system developed by Google to power smart phones. In order to provide productive application development, applications can be developed using Java and easily tested and deployed to devices with Android. Development can be done with a simulator or with real devices. Using Android Application Programming Interface (API) features a rich ground of options for robot developers. Programming by commands commonly feature for robots, works seamlessly on Android. Using Android’s API, a programmer can make his robot to act. Android’s API also offers easy access to camera and orientation sensors. Some devices have only accelerometer, while other have accelerometer and compass, and others gyroscopes. The same orientation function calls can be used to query these sensors, independently of the device. One limitation that most mobile phones don’t have a USB Host port, so no USB accessories such as mice can be connected to them. To bypass this limitation, Open Accessory API allows accessories to be the USB Host. This allows external custom hardware to interact with Android programs. Navigation of a mobile robot in an unknown environment is possible by sensors which obtain the information of surrounding environment. For effective communication between mobile robots we need to use some sensors. Therefore mobile phone sensors can be categorised such as the Sensors used for collecting information about environment, for communication between mobile robots, for collecting information and also for communication[5]. 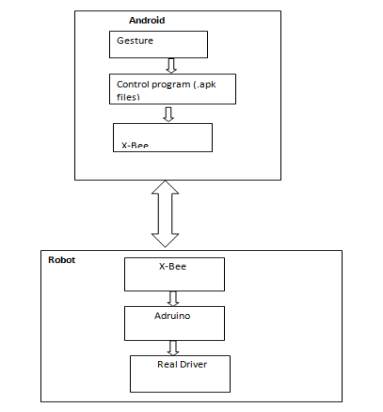 The shield for Arduino has the DC Motor interface. The interface is built around the L293DC Motor driver IC. It has a obstacle sensor to detect within 6cm range. If IR is used, we can be able to detect the obstacle. The interfaces have to be selected with the jumper. The obstacle sensor is an IR sensor which is used for detecting the obstacles and acts in impulsion to safeguard. In ultrasonic sensor, we use ping function which detects the distance of the closest object in front of the sensor and sends the data to the mobile. To run the DC motor, enable line be high, set I1 line to High and I2 line to Low which rotates in one direction and set I1 line to, low and I2 line to High which rotates in another direction[1].

Extensions of our current work include an extension to camera implementation which will be useful for deploying sensor networks in large areas.

The system is highly flexible and scalable and can be expanded to other applications. On the software side, our Android application ensures that the system enables energy saving, and can suggest task scheduling with both instantaneous power and cost considerations. Our future work includes the implementation of additional applications, the refinement of our implementation, especially with regard to communication and possibly porting our network stack to other platforms.

I am very grateful to my guide Mr.J.Sureshbabu, Scientist-B, National Institute of Electronics &Information Technology(NIELIT),Chennai who provided us with effective information regarding the functioning of System.I also extend our sincere thanks to all those people who have helped us successfully design and implement this system.