I am now going to help xAcme’s system admins set up their Worchester Site. They have asked me to help properly subnet addressing blocks to accommodate the site’s VLAN sizes. I will have to consider challenges when structuring the subnets too large and/or too small during this process. For the system admins of xAcme to get a better understanding of the benefits of subnetting, they asked me “what is subnetting?” and “why do we want to subnet a network?”. These are fair questions to ask, so I quickly explained to them below.

What is Subnetting? – (1) Subnetting is short for “subnetwork”. We have one network for the company, and subnetting is the process of breaking the network down into smaller and more manageable pieces to allow easier flow of network traffic. For example, in layman’s terms, imagine you ordering a pizza. You get one whole round pizza.  You can’t eat one whole round pizza in one sitting. So, in order to easily manage and eat the pizza, you cut it into slices. The slices are like small subnetworks of the whole pizza which is the single main network.

Why do we want to subnet a network? – I told the xAcme system admins a lot of benefits to subnetting a network. (1) It can help increase security on the network. It can help with organization, by means of putting different departments or teams, on specific vlans. Subnetting will also help with performance of network speed. Breaking one huge single network into smaller subnetworks will help with congestion and easier flow of packets.

Currently, there are four vlan’s being used at the Worchester site.  The vlan’s are Administrative with 30 devices, Server with 24 devices, Instructional with 215 devices, and faculty with 19 devices connected.  That is a total of 288 devices with room potential growth. Worchester has been allocated the IP address of 10.20.0.0/16.  This has a total of 65,534 host’s that can be used. For each vlan, I have left room for potential growth. I recommended putting each VLAN in its own subnet to the xAcme system admins. The reason is because it will help make it easier to manage and troubleshoot network problems in the future if the occur. 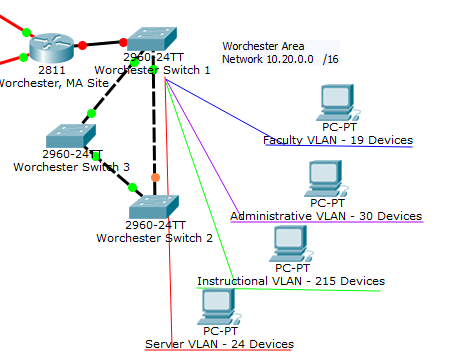 xAcme also has a Boston site. The system admins of the xAcme team have asked me to implement a routing protocol to manage networks within the Boston site topology as well as default routes to exit non-Boston traffic. The Boston site has three routers.

As the network admin I must choose a routing protocol that will best fit Boston’s network infrastructure. I have chosen to implement OSPF (open shortest path first) as Boston’s routing protocol. Using OSPF will build and calculate the best route to take for packets being sent over the network. OSPF must be aware of its neighbor’s up and down state in order to pick the best path. (2)  Bellman-Ford algorithm also known as RIP is another routing protocol. It calculates the hops it takes to reach a subnet. (2) EIGRP (enhanced interior gateway routing protocol) is an enhanced distance-vector protocol. It combines OSPF and RIP. This was designed by cisco systems to help automate routing decisions and configs on a computer network. All the routers at Boston are Cisco however, I will not use the EIGRP. I have decided to go with OSPF because it scales better on large enterprise networks.

This is for the default routes

If I was to put in a second connection to Bostonrouter3

If I was to put in a second connection to Bostonrouter2 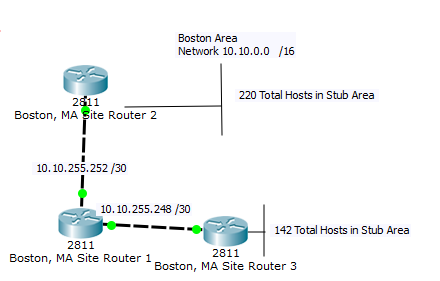