Designing of Routing Protocol in WMN

As we all know that the Wireless Mesh Network (WMN) is defined as the types of the new encouraging type of technology which depends upon the use of already existing software and the hardware components. In order to understand the project, the research of the network of flying Unmanned Aerial Vehicles was done. The study of the different routing algorithm used in the military system is also carried out for an enhanced understanding of the scheme. The use of various types of the reactive and the proactive routing characteristics for the purpose of transforming the information is also studied for the purpose of carrying the project linearly. For the purpose of simulation, the use of various standard along with the stand alone simulator were studied for varying the number of the nodes, nodes mobility and density.

The major objectives of the project was to develop a routing protocol in WMN in between the nodes of the network.

The additional basic objectives of the project are:

In the project, I was responsible to perform different managerial task during the project such as the distribution of task, team coordination etc. I was also involved in performing a review of the different books, journals, notes etc. which are written in the field of an electronics and computer especially in the field of networking. Further, I evaluated the influence of the following different parameters such as the traffic load, network delay, network size, average link usages etc. for the purpose of attaining the proper design of the system. I simulated the design with the help of the simulator. I also generated the mechanism which was used to produce the random number of the events among the nodes for the purpose of studying the design. I then performed the analysis of different types of output of the simulating process.

The organizational chart of the institute where I conducted the project is given below. The organization chart shows or provides the flow of the authority from the top to the bottom of a different parameter inside the organization body. 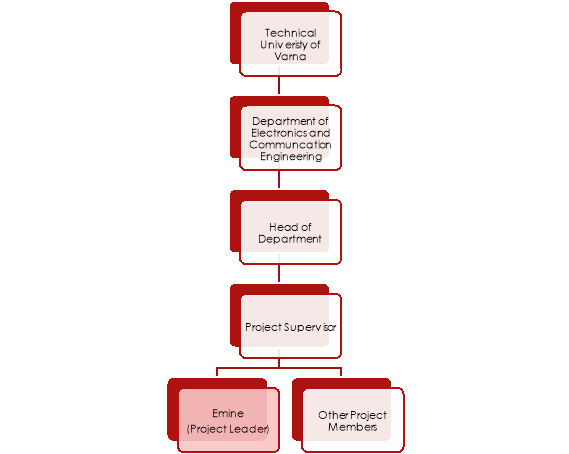 During the conducting the project based on to design of a hybrid protocol with relatively high speed in wireless mesh network among nodes for communication purpose, I carried out the following roles and duties for effective completion of the project in an appropriate time.

Initially, I accomplished the literature survey in order to gain theoretical knowledge about the wireless mesh networks and routing protocols. Then, I planned for the methods to conduct the project in a scientific way. For this, I developed straightforward pseudo code to understand the basic structure of logic. I made the use of different types of the reactive and the proactive routing characteristics for the purpose of transmitting the information. For the simulation, I used various standard and built the stand alone simulator for varying the number of the nodes, nodes mobility and density. I also performed the study of the simulation result on the basis of the routing overhead, packet delivery ratio and latency for the purpose of the understanding the behaviour of the project.

At the phase of the starting the job, I performed the task of literature appraisal in a variety related field on which the project has to be constructed. During this process, I performed a review of the different books, journals, notes etc. which were written in the field of an electronics and computer especially in the field of networking.  Furthermore, I also studied the various types of the unmanned aerial vehicles, its operation on the various speed and its different paths, the altitude at which it is used etc. for the purpose of selecting the proper network method on the design of the system. I also made the study on the different types of the network like the ad hoc network and the mesh network in order to have the better understanding the project aim and the objectives. 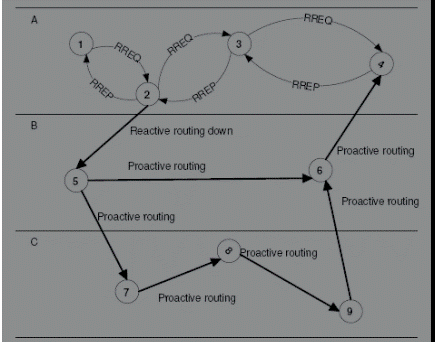 After the design of the protocol was achieved, I went for simulating the design. While simulating the design, many processes were taken. I simulated the design with the help of the simulator, which is itself an independent program that is written in Java. I generated the mechanism which was used to produce the random number of the events among the nodes for the purpose of studying the design. I then used the total number of nodes which were designed as the input parameters for the simulation. I placed the nodes within the units of a 0-132 range of altitude and defined it as a lower class, i.e. class C. I also put the nodes in the same manner in-between 133-264 and in-between 256-400 and defined it as a class B and A. Finally using the simulator, I started the simulation of the design. In function of a number of nodes, I also measured the routing overhead.

Further, I also noticed that the routing overhead was maintaining the value of around 30%, except for the case with the use of very low numbers of nodes. I also analyzed that the 30% was a high overhead for the directing algorithm. Due to a frequent refresh of the routing table and short data transmission sequence, I obtained that a little change on the percentage of directing overhead with the increase in the numeral of nodes. 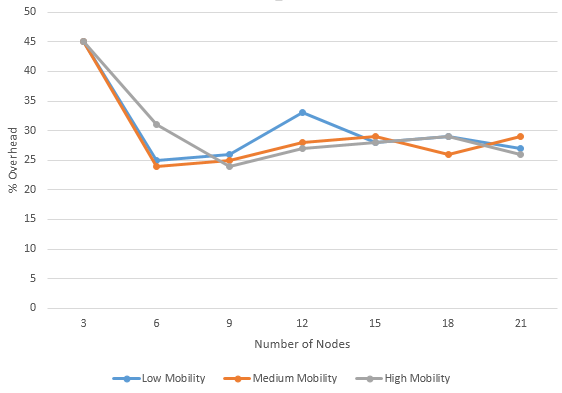 I then performed the evaluation between the overhead with the changing node density. I then found that as compared with the average value of 30%, the resulting values were in between 25-33%. And I finally came to the conclusion that the node density was not affected by the routing overhead. Along with this I also came to conclude that the relation among the node density and packet overhead was not altered due to the mobility of the nodes. I also obtained that the relationship between the packet overhead and node density might be affected if there would be any change in the node quantity in each node class. 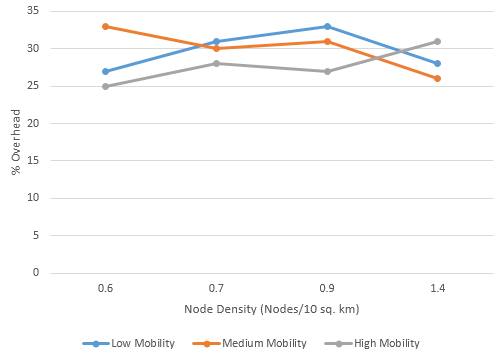 Fig: overhead vs. node density of all three class

During the project, I adopted all the safety measures that were to be used while conducting or designing the program. Since this project was associated with the analyzing and designing only, so there were no any types of mechanical activities. Hence it had no any effect on the environment. Furthermore, I also took all the precaution while conducting the testing and analysis of the system.

I continuously monitored the position of the UAV and kept the number of nodes at a reasonable level while analyzing the system so that the issue of the latency could be minimized. Along with the latency, it also helped to minimize the problem of scalability which was caused due to the increased number of nodes in the system.

In order to conduct the project, I referred different standard codes and executed the program within the limit or the boundary of the organization. I also have used an ISO/ IEC 8473-1:1998for the protocols used in the system and an ISO/IEC 8208:2000 for the routers used in the project.

I was able to achieve the goal of the project that was set before the conduction of the project work within the provided deadline by the University. I was successful in designing the hybrid routing protocol in the mesh network.

I contributed a lot for the finishing point of the project in a vital time. For this, I adopted the different managerial role throughout the project. Along with this I also prepared the task of distributing the various portion of the job among the team members. I also made the other member of my team to visualize about the project goal and its importance.