A novel approach for adaptive energy efficient transmission in WSNs

In wireless sensor networks (WSNs), sensor nodes work on finite capacity batteries. So, in order to increase network lifetime the mobile sensor nodes should be operated at low power. Hence, we need a novel approach for efficient scheme for transmission in WSNs. In this scheme, according to temperature changes the connectivity between sensor nodes is estimated by using open loop process, the network is divided into three regions based on closed loop feedback process which helps to reduce packets overhead in the network. Region dependent threshold on loss of transmitter power (RSloss) and present number of nodes in each region helps to adjust transmission power level according to changes in connectivity between nodes because of changes in temperature. This scheme achieves high energy saving than existing conventional method.

Wireless sensor networks (WSNs) works based on IEEE 802.15.4 standard. This standard operates at frequency of 2.4GHZ and data rate of 250 kbps. WSNs are used mainly in industrial, bio medical, security surveillance and weather monitoring applications. Each sensor node consists of: radio transmitter, receiver, sensing unit, processing unit and limited capacity battery [1] .Because of limited battery lifetime at each sensor node, the transmitter power level should be minimized to increase the energy efficiency and network lifetime of WSNs. In WSNs all the systems should be operate at low power to increase energy efficiency because it is an important concern in wireless communication.

In algorithm of local mean (LMA), Based on number of received acknowledgements by the reference node the transmission Plevel is adjusted according to threshold transmission Ptlevel .It improves network lifetime but cannot estimate the link quality [5]. In other existing schemes based on RSloss, transmitter Ptlevel is estimated [6].

By using LSA the transmitter Ptlevel is obtained as follows [9]

According to free space model the actual transmitter power level is obtained as follows,

Minimum, Maximum and Average value of RSloss for all nodes present in the network can formulated as follows:

Then limits of the three regions are given as: [7]

To count number of nodes in each region, a counter is initialized with initially zero.

Given that for all k ε N,

Estimation of Ptlevel for new RSloss is formulated as for all k É› N,

The difference between Ptlevels assigned before and after the proposed scheme is denoted as Ptsave. 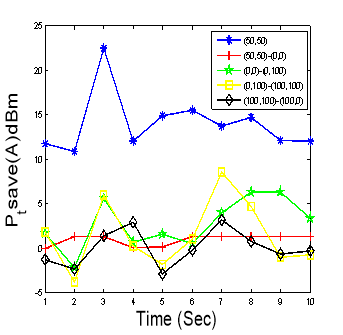 From figure 3, we can infer that, maximum Ptsave is 12dBm to 21dBm. When a reference node is at origin of the square region, Ptsave is constant around 1dBm. 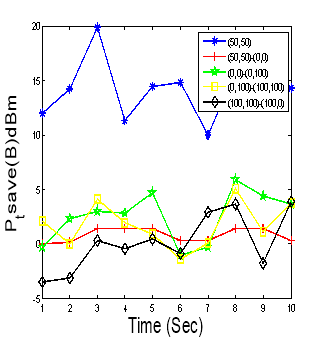 Figure 4: Transmitter Ptsave in region Y for different reference node location. From above figure, we can infer that maximum. Ptsave for region Y varies from 12dBm to 21dBm 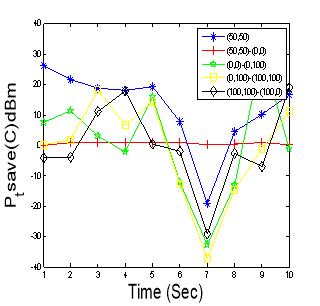 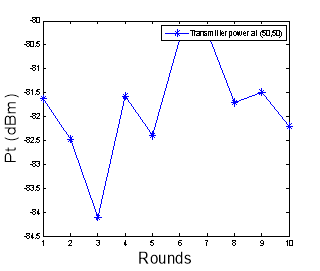 From above figure 5, we can infer that Ptsave for region Z varies from -20dBm to 20dBm.

From figure 6, we can clearly observe that Pt lies between -84dBm to – 80dBm.

By using this scheme the energy consumption of the mobile nodes is reduced in WSNs. This scheme uses both open loop control and closed loop feedback control process. The temperature changes are adjusted with the help of open loop process. By using these two processes the energy consumption of mobile sensor nodes is reduced by comparing with existing schemes. By dividing the network into three different regions we can prolong the lifetime of network and maintains good connectivity between sensor nodes.