“To show mercy to the conquered and subdue the proud”

This report deals with the historical events that happened during the time of the Roman Consul Caius Julius Caesar (Caesar).

It will first look at the important battle at a town called Alesia. It will then describe the battle that took place under the command of Caesar and his opponent Vercingetorix. It will describe some of the unique military strategy used.

Finally some conclusions will be drawn about how this historical event had influenced how Europe looks today.

Information in this report is taken from both books and from three websites. The websites were found using Google searches. Websites were checked to guarantee the information was reliable.

1. Title: De Bellum Gallicum (in English it is called ‘Commentaries on the Gallic War’)

Livius is a website on ancient history written and maintained since 1996 by the Dutch historian Jona Lendering. It started on a different URL; the present one has been in use since 2000. The website is not for profit; with a couple of exceptions that have been indicated, you can use every photo and text, provided that you refer back to Livius and do not make profit either.

ArsBellica is an Italian website, also translated in English to permit foreign students to draw from these precious studies, it belongs to Marco and Luca Maurino. These authors document history’s battles for their own website and they collaborate with few of the most important universities in Italy.

Is a famous international website owned by Neil Vogel. The website debates about several topics like politics, history, maths, religion, sports and much more. It is run by a staff of experts who give the chance to freelance writers to send in their own articles, and after a meticulous review, these articles can be published.

Was one of the most important men of all time. He was known as a brilliant military General, and he took part to form the ‘first triumvirate.’ The first triumvirate was a political alliance between three consuls in the late Roman Republic: Julius Caesar, Pompey the Great, and Marcus Licinius Crassus.

Caesar was the first Roman to land in Britain, and he unified the Gaul after its insurrection. During the siege of Alesia, Caesar had ten legions available (V, VI, VII, VIII, IX, X, XI, XII, XIII, XIV, XV), for a total of 60,000 soldiers (ThoughtCo.com, 2017). 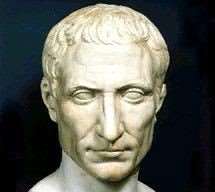 Vercingetorix is the name that means’who won 100 battles.’ He was the Gallic Prince of the Arverni’s tribe. During the Gallic war he was  able to gather most of the Gallic tribes in one single impressive army, with himself leading as the General. 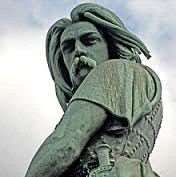 In 58-51 BC, in territory Gallia Cisalpina (commonly known today as France and part of Belgium), the Roman Consul Caius Julius Caesar (Caesar), ran an intensive military campaign in the region of Gaul. The nature of Caesar’s tactics, and the style of his battlefront during this period was one of the most bloody during Caesar’s military career.

Within the hill town of Alesia, Caesar and his legions were getting closer to the battlefield that would eventually mark the event as one of the most remarkable military victories in history. This is because the battle that was fought in Alesia involved military strategies which tested Caesar’s abilities as a leader. He had to find ways to manage numerous traitor-tribes, revolts, and small rebellions.

Managing these were important because Caesar knew that if the Gallic tribes formed an alliance against him, the Roman legion may not continue to maintain their rule in the region. (GreatMilitaryBattles.com, 2009)

In 52 BC., Vercingetorix, after the battle of Gergovia, thought that it wasn’t the right moment to engage in a royal battle against the Caesar’s army, so therefore he withdrew to the walled Mandubii town of Alesia.

Placed on a hill and encircled by river valleys, Alesia was in a strong defensive position. Once nearby Alesia Caesar had to decide the best way to make his attack. Instead of launching a frontal assault, he decided the better strategy was to lay siege to the town, by surrounding the town and waiting for them to surrender.

To make sure that Alesia was away from any sort of rescue, Caesar’s army built a

‘circumvallation’ wall. Provided with ditches, watchtowers, and traps (such as ‘stimuli,’ ‘lilies,’ and ‘tombstones’) the wall ran for roughly 15 km.

During the endeavor to build the wall by the Romans, Vercingetorix was sending small groups of cavalry with the aim to disturb the Roman’s work and also to try to kill as many Roman soldiers as possible.

Wondering if a possible relief army in Vercingetorix could help, Caesar decided to erect a second wall, in slang ‘contravallation,’ that was long about 21 km (ThoughtCo.com, 2017). 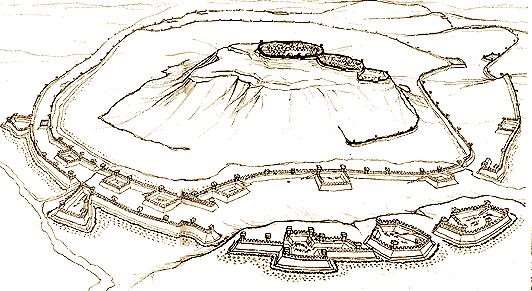 Picture of the circumvallation and contravallation walls at Alesia (Ancient World, 2015)

After three weeks of siege, at the end of September, the people in the town were starting to starve. Because of this, Vercingetorix decided to try to assault the Roman camp from the city, with the assistance of the relief army that arrived the day before under the lead of Commius (one of Vercingetorix’s army generals), attacking from outside the Roman camp. Both attacks were contained by the Romans, so the Gauls attacked again in the next day, this time with the help of the darkness.

When Commius thought that it was the right moment to break through the Roman lines, Mark Anthony and Gaius Trebonius’ cavalry gave a great proof of their valour keeping the position assigned to them by Caesar. From inside, Vercingetorix was also attacking, but the surprise’s element was lost due to the need to fill in the Roman trenches before moving onward (ThoughtCo.com, 2017).

After one month and a half of the siege, the Gauls decided to concentrate their forces in one last attack. The target was the Roman camp of Mount Rea, the farther from Alesia but even the more difficult to defend, because the landscape of the territory had poor visibility. Inside the city’s wall, the remains of the army of Vercingetorix  decided to support the final attack from inside the lines.

After 7 hours marching and 5 hours rest, the Gauls launched a devastating charge beginning a bloody hand-to-hand fight. Right away the Roman Tribunes needed reinforcements, so Caesar decided to send 6 military units (cohorts) from the south camp, next to the Mount Flavigny. Vercingetorix saw this move, and he sent quickly a charge to the camp that had just been deprived of a relevant number of troopers.

After Caesar gave the order to get the 6 cohorts back to defend the camp from the assault of Vercingetorix, Caesar’s situation was getting dramatic and he decided to dismount his horse and start to fight with  his comrades. Once the legions of Caius Fabius and Decimus Brutus had recognized the General by his red cloak fighting on their side, they found new energies starting to fight harder (Arsbellica.it, 2015). 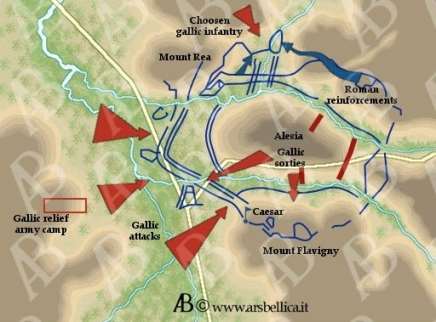 After the 6 cohorts were arrived back to the camp of Mount Flavigny, south of Alesia, Caesar had to rush to the north, to Mount Rea, where the outside army of Vercassivellauno (Vercingetorix’s army general) was charging the Roman camp with about 60,000 men.

In his way up to the north encampment, Ceasar collected as many horsemen as possible (the Germanic auxiliary cavalry were the best knights of that time), and 4 reserve cohorts. Caesar knew it was his last chance, so he gave his last order: he sent the Germanic cavalry ahead following the entire perimeter to reach Mount Rea, run around it and take the attacking Gauls with surprise by their back.

It was a pretty dangerous move because he had to deprive himself of the horsemen for at least two hours, the time to run to the north of Alesia and run around the enemy.

In the meantime, Commander Labienus was holding the situation difficultly, waiting for Caesar and relief forces. When the Roman General arrived, he became conscious of the situation. The factions were so mixed that wasn’t even possible to thrown an arrow without the risk of hit their own comrades.

The legions were in great suffering, but fortunately, as Caesar expected, the Germanic  auxiliary horsemen arrived at the right moment to slaughter the Gauls from rear. Caesar wrote in his book like below:

(“Ours, renouncing javelins and held the gladii. Suddenly appears behind (of the enemy) our

Cavalry. The other cohorts are pressuring, enemies extend their backs. The riders chasing the fugitives. There is a great slaughter “). 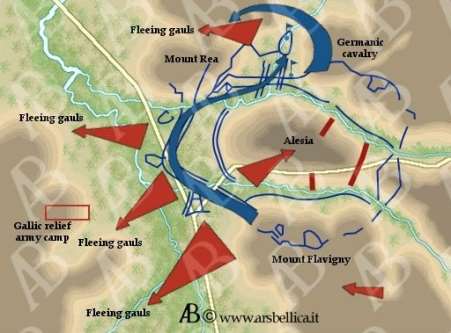 The effect of the Caesar’s last move did not kill the biggest part of the enemy army, but the withdrawal of 60,000 men had increased the fear of the other Gauls who collapsed in panic. After 50 days of siege and their last card played, the Gauls did not manage to break through the Roman defenses. Later on, Vercingetorix yielded to Caesar (arsbellica.it, 2015).

With the repression of the Vercingetorix’ riot, Rome would finally annex the region of Gaul as Republic Province. This was a significant victory which changed the culture in Gaul.

This victory may have other several results. The Romans, after this victory and the following conquest of Britain (England), increased their possession, from the Atlantic Ocean to the Mediterranean Sea, until the North Sea. This property began the fusion of the Celtic people with the Latin ones and the merger of their cultures was be the beginning of the Romance culture of Provence, the courtly poetry and the Carolingian cycle poems.

Despite the rising of a new culture, another one was dying out: The Celts. A thriving and old civilization that survived only in the farther and beautiful Island of Ireland.  (arsbellica.it, 2015).