Over the history, governments have strived to ensure Americans enjoy a wide, safe and nutritious diet. Certain lessons were learned while some problems still persisting today. It will always be a topic of controversy and debate, but food is a powerful weapon and is the reflect of a nation. The first and Second World War have caused many changes in the Americans diet. The national government has influenced how we eat. In an examination in the National Archives, can be found images that reflect the government’s effect on the American diet with the Food rationalization, the influence of propaganda on the American diet and nationalism emerged with the America’s war history. After the entrance of the United States in the First World War in 1917, U.S. Food Administration creates a system of supply control, in order to control the conservation and distribution of the supplies in times of war. The voluntary program of promotion and Compassion urging Americans to take care of food at home and modify certain habits in order to have greater volumes’ food to send to the soldiers. In late 1941, the United States was joining the World War II, which makes clear that the voluntary conservation will be not enough. In 1942, President Franklin D Roosevelt enacted the Price Control Act Emergency for take control and rationalize food and basic products to ensure the equally distribution of the resources among all Americans. A ration book system was created in which every citizen, child or adult, could buy, it was classified with red and blue dots and people used them to buy their food. The red points included meat, fish and dairy products, and people received 64 points for use per month, for their part, blue dots, that include canned and bottled foods, were 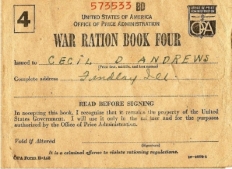 awarded 48 points per person per month. It should be noted that the number of points in a food depended on the availability and demand. Sugar was the first food to be rationalized, and the longest-serving rationed from 1942 until 1947. Other foods rationed were the coffee, dry food, and processed foods. This event run a change in classic recipes as a consequence of the unavailability of certain foods. Food boards were created, which guided families in how to preserve canned or replace food that was limited. A possible solution to the protein shortage was for example the called variety meats that included hearts, kidneys, intestines, and even the feet and heads of cows, pigs, sheep and chickens. (Kamps The Goverment’s effect on the American Diet) This voluntary movement of citizens created the possibility a  larger amount of food shipped to Europe not only for American troops of soldiers but it’s also for millions of people who suffer hunger as consequence of the war. The challenge was not easy, to achieve this, the Department of Defense consult psychologists, sociologists, food scientists, dietitians and domestic economists to determine how to make successful changes with the food available.[1] During World Wars I and II, nutrition became not only a matter of public health, but also of national security. To provide adequate nutrients to soldiers and citizens, the government plan some nutritional educational programs. With certain infrequent foods, understanding food replacements, such as beans for meat, was critical.[2] To despite the government’s best efforts the World War II nutrition campaign had an insignificant impact in eating habits, and occasionally the impact was completely involuntary, like for example many children prefer white bread after eating school lunch because the Diet served in the campaign to improve the nutritional value of meals. Confronted with cultural traditions, advertising and socioeconomic forces, the mission to change American eating habits has been a difficult battle. The believe that food will win the war. Herbert Hoover developed a voluntary program that promote compassion and patriotism to support the effort of soldiers in the war. This system was intended to provide support to soldiers and allies to maintain their strength and vitality, emerged propagandist advertisements that recommend citizens to eat fewer meats, fats and sugar. Phrases such as “Your Victory Garden Counts More Than Ever” let know people to do not throw away food and modify certain eating habits integrating more fresh fruits and vegetables, since the difficulty of importing them. The purpose of these efforts was to reserve those portions of meat and food such as wheat to increase food shipments to soldiers fighting for freedom.[3]The USDAI encourage the cultivation of products in family and community gardens, called the victory gardens. One of the reasons for the creation was the necessity in some rural and urban areas to compensate food rations and add vitamins to the diet Americans supporting the financial difficulties in rural areas with the use of food conservation. The most important goal of this movement was to stimulate the use of food through alternative production systems, consumption and preserves and that was seen as true patriotic acts to help the troops and the nation. The hard work of each citizen became particularly important in the wake of the nation. Patriots eat doughnuts, 1940, the results of two studies caused panic. A handful of subjects deprived of vitamin B1 (thiamine) became slow and listless. One researcher concluded that thiamine deficiency was causing Americans to lack energy and motivation. The posters were at the heart of war campaigns to change American eating habits.[4] Posters during the period of World War I were exhaustive focused on the reasons for preservation. They appealed to the sense of patriotism and virtue. World War II posters wide differ, were colorful and with positive images. They displayed Americans as housewives providing nutritious food for their relatives. Home economists studied strategies to create campaign that make sure they were nutritionally complete. The rationing was introduced when voluntary conservation methods were not enough. Inexorable publicity shaped a sense that the only thing Americans struggled for was the right to consume. They were able to get a house in the suburbs, a new middle class emerged, and they concentrated on a material life, the result of war. The advertising generated during the war shaped an image of the sense of victory as the freedom to enjoy all those luxuries that the Americans had been deprived of the war.

Food is a pastime, an interest, maybe an obsession, and, certainly, our means of support. There are decisions taken about what and when to eat, frequently not knowing in what way our government shapes and influences those decisions. As we discover the outstanding historical records of the United States, the learn of the reasons on events and how the role of the government in protecting for unsafe food in the era. We begin to comprehend the vital relations between our diet and agricultural changing and industrial progressions. The discovery of how our concerns about food have changed over the time, and still evolving. The food matter has always engaged Americans and their government and possibly continuously will.