To what extent did women joining the workforce in world war 2 impact women’s role in The United States of America during the war and the decade following? 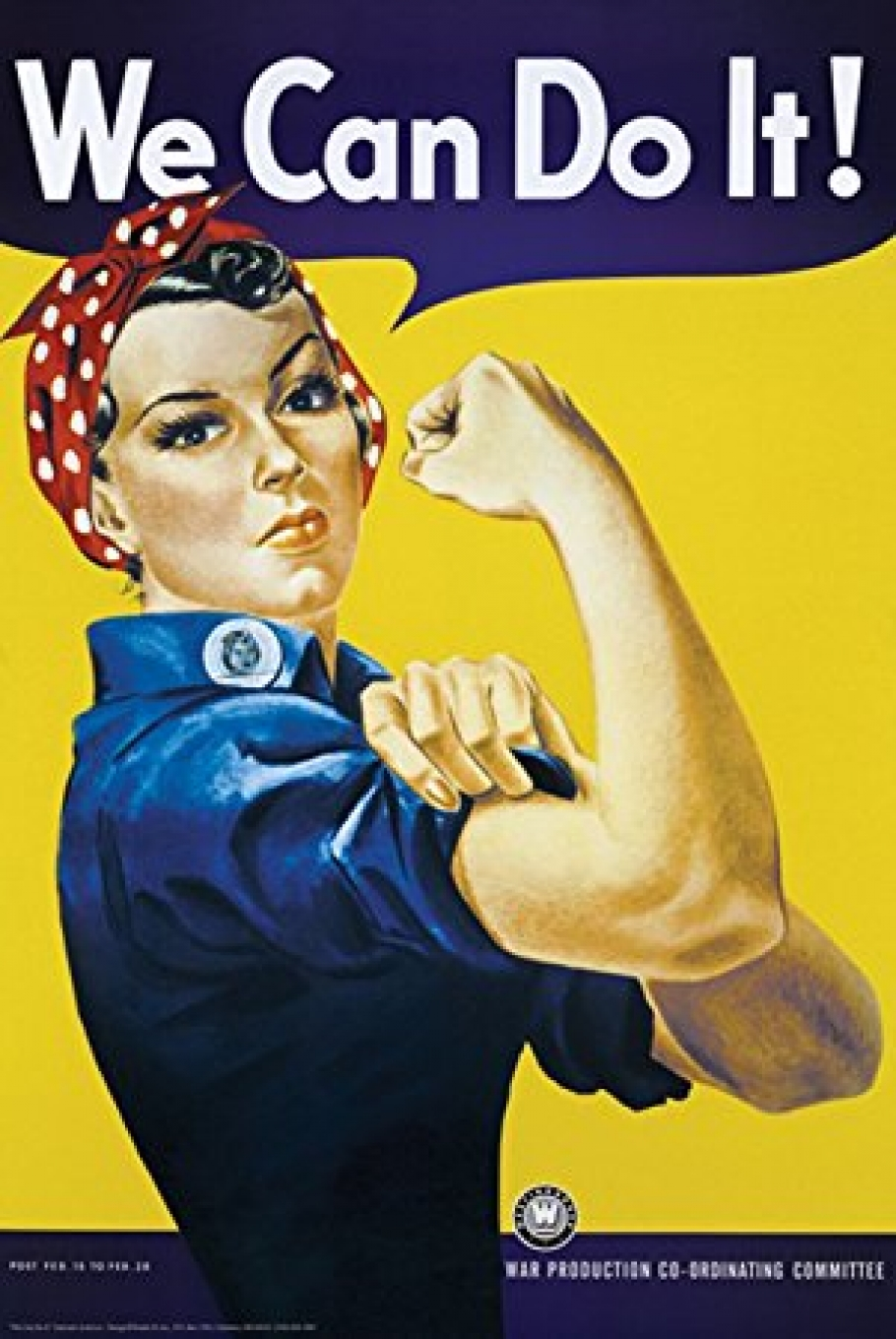 To what extent did women joining the workforce in world war 2 impact women’s role in The United States of America during the war and the decade following?

At the start of WWll thousands of men were drafted to go to war leaving many positions empty. This caused a need for people to fill the spots. Those people being women. Before the war started women were expected to get married , bare children, and spend all their time tending to the house and family. World War Two gave women the opportunity to show they were just as capable as men and their societal role could exist outside of the household. What is interesting about the surge in women’s involvement in the workforce and their involvement after is that even though women were able to prove their abilities, they still quickly reverted to their prescribed role pre wwII. 350,000 women joined the military and worked as nurses, pilots, and in the armed forces. Before the war the two predominant roles women could have in the workforce were sewing and typing. This also opened up a whole new realm to discrimination against women of color. Many white women refused to work with women of color. Women of color also had an incredibly difficult time finding good positions especially in the armed forces. Issues like this that are brushed over and ignored are the ones we run the risk of being repeating. Mid century violence against women was rampant across the world, and racial tensions were reignited. Some women were forced to participate in intercourse up to 50 times in a single day. The objectification and torment that women faced abroad shows the multiple impacts the war had.

A first hand account published in 2011 by the American Folklife Center details a video of Meda Brendall, a single mother and working women during WWll. In the video she says that welding is an art form. She took pride in her work as a welder. Her relationship with her field of work is one of the countless examples of women proving that they regarded their duties as a more than. Women were showing qualities of highly skilled workers. Taking their duty from a job to a career. Like many women during this time she was a single mother working seven days a week and raising her son who would soon be drafted as well. This was a common occurrence for women during the war. Brendel’s interview goes to show that women like herself were more than equipped to handle home life and their careers. She wore a welding uniform to work, the same uniform men wore before the war. This demonstrates how women were able to show the world their ability to complete tasks at the same level men could using the same materials. Since Brendals story is specific to her own experience, it is important to note that her retelling of her experiences are not identical to other women of the time. She was engaged to a soldier creating struggles and hardships similar to many other young American women. Her account should not be generalized and should be taken into consideration when analyzing her perspective. It is important to note when analyzing Brendalls interview as a source that the interview Brendall gave was recorded some 50 years after the war. Her coherence was not strong and there for the information she relayed may not be completely reliable.

A parallel that can be drawn to detail the difference in experiences women faced abroad and at home is that of how women across seas During WWll were often forced and objectified by soldiers. 200,000 thousand women were forced into prostitution by the imperial Japanese army. Many became sex slaves throughout east asia. Each woman’s perspective shows a unique experience. This is because they have different relationships with the war emphasizing certain events over others. Drawing conclusions about the war based on whether or not they themselves faced discrimination in the workforce.

Something that should be noted when analyzing the impact of wwII on women are the advertisements regarding women during and after the wat. The United States government undertook a recruitment campaign that promised women resources and empowerment in exchange for joining the workforce in roles they had not undertaken since World War I.

The most recognizable image associated with the government’s outreach and propaganda campaign included Rosie the Riveter who was featured in posters that read, “We can do it!” and which showed a smiling woman in overalls with her shirt sleeve rolled up to reveal her bicep to indicate strength and physical prowess.

Indeed, women did fill the role of men on production lines and in the shipbuilding industry as well in many other roles that had seen relatively few women in peacetime. It was even reported that women often exceeded men in job performance that required eye-hand coordination precision and other jobs that required exacting technique such as certain types of welding similar to Brendall. Women also showed stamina and physical strength that rivaled their male counterparts.

A parallel that can be drawn between Rosie the Riveter and other ad campaigns such as the 50s spread of a Van Heusen ad with the words “ Its a mans world”. This shows how women’s role in society quickly shifted backwards after the war.

Yet even in the height of the demand for female workers, companies often found a way around providing them with equal pay to that would have been paid to men. There were regulations adopted specifically to ensure equity in pay especially for those roles that did not require oversight and supervision, but companies typically got around this.

Many of the interviews taken directly from the women who worked as taxi drivers, truck drivers, shipbuilders, heavy equipment operators and farmers during World War II show that women found their new line of work to be fulfilling and rewarding. Very shortly after war broke out, they all left for wartime work. We had to grow vast quantities of potatoes for the war effort. Said Philippa Gould They often make clear that they would have enjoyed staying on them and yet, when it came time for the men to return from the war. women were discouraged from remaining on the jo and encouraged to go back to the home. Eugenie Balderstone was one of millions brought into Britain’s wartime factories.

“I went to work on munitions at British Mark. My job was filling shells with TNT powder. This was, I thought, my contribution to the war effort.

Because there was concern that men would not be able to enter into their previous role as breadwinner and provider, the same propagandists who had encouraged women to join the workforce now encouraged women to go back into the home and clean house, cook and raise their children with no thought to a professional career out of the home let alone operating machinery and building ships.

For some women, the notion of contributing to the war effort was appealing and they were willing to volunteer their time. Even though the volunteers may have been managing entire lines of production they did not ask for wages due to a sense of patriotism. Whether paid or volunteer, women’s contributions to the war effort on the production line was quickly put aside once the men returned from the front lines.

Even in the height of the war, not all groups of women were experiencing the same sense of independence and newfound status. Japanese American women in California for example were forced to live in internment camps so their role in society was diminished during the war and progress in equity significantly hampered by the racism at the time.

The return of men to their old jobs and the displacement of Rosie the Riveters meant that women had to make new adjustments including less personal income and less self-determination in how they spent their time, developed their skills and spent their money.

Because they had been so successful in replacing men in so many jobs, women had to go out of their way to pretend they were not so competent after all. Male-owned companies, government messaging and husbands across the country and the women themselves constructive a new narrative about the happy homemaker so that men would not feel disempowered.

The decade that followed saw a market decrease in the empowerment of women as evidenced by well-paying jobs in a variety of industries. The fashion of the time was restricting, the demands for domestic perfection were unprecedented, and women found themselves in an increasingly narrow role with beehive hairdos, pencil skirts and high heels. Gone were the overalls, boots, hard hats, shovels, welders, tool boxes and work gloves needed to create essential equipment such as airplanes and trains.

The images of women in commercials featured women who were helpless, submissive and dumb. One advertisement of the fifties depicts a husband telling his wife,” Honey you can’t burn the beer.” The women were viewed as existing to serve men and not very effectively.

One can only assume this prescriptive and narrow role took a toll on women’s confidence.

World War II worker Grace Wallace said, “Do we not deserve to be recognized with pride and honour? Why were we forgotten so easily after we were no longer needed?” Grace Wallace, ‘WW2, People’s War’. ‘WW2 People’s War is an online archive of wartime memories contributed by members of the public and gathered by the BBC.

But the working women of World War II did not forget their skills and experiences and told their daughters who two decades later started to organize a women’s movement in the sixties and seventies that would make permanent some of the very gains their mothers were able to experience during the war.