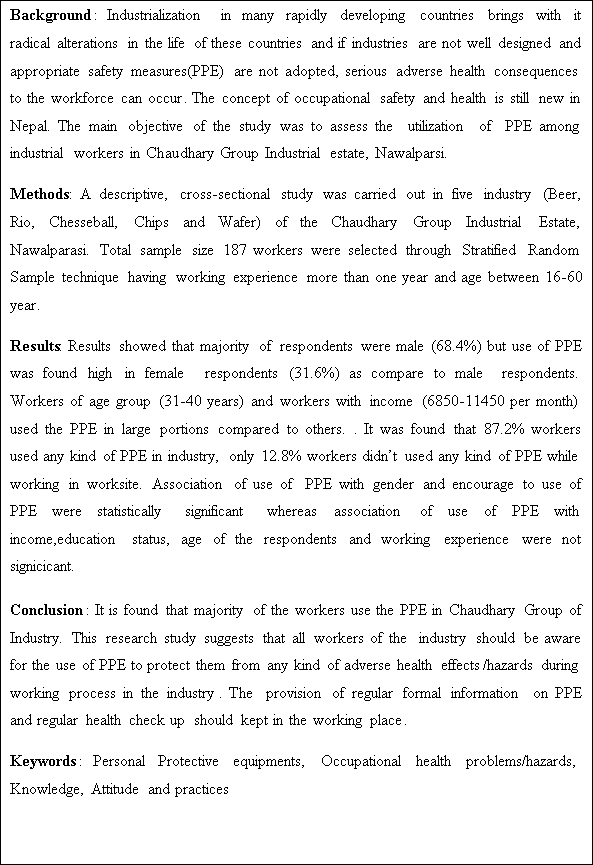 The use of personal protective equipment (PPE) usually implies that the worker is expected to operate in a potentially hazardous environment with the protective device as one of the key means of preventing exposure.5

ILO estimates that more than 250 million workers meet occupational accidents and 160 million are suffering from occupational diseases each year at the global level. Similarly, research conducted by ILO (2003) had concluded that every day, more than 6000 people/workers die, equivalent with one died every 15 seconds, because of the accident and illness related to work in the work places.7 Occupational and Industrial accidents/hazards are all caused by preventable factors which could be eliminated by implementing available measures such as PPE. This is demonstrated by continuously reduced accident rates in industrialized countries.2

Nepal is an developing country where various types of industries are in exdending order. All over the Nepal there are different varieties of industries. It is estimated that each year approximately 20,000 workers suffers from accidents at workplace which lead to about 200 lives lost in Nepal. Many incidents have been reported in manufacturing industries where large numbers of workers were injured due to the lack of safety provisions. Nepalease workers are suffering from one or more problems in their workforce.7

The objectives of this study is to assess the use of personal protective equipments among the workers of Chaudhary Group Industry of Nawalparasi district of Nepal.

A descriptive, cross-sectional study was carried out in five industry (Beer, Rio, Chesseball, Chips and Wafer) of the Chaudhary Group Industrial Estate, Nawalparasi from October 20, to November 2013. Total sample size 187 workers were selected through Stratified Random Sample technique having working experience more than one year and age between 16-60 year.

Ethical approval was taken from ethical review board of Pokhara University and Chaudhary Group of Industry. Verbal informed consent of each respondents was taken. The purpose of the study was shared to each respondent.Validity of the research was maintained by consulting with the research expert and supervisor opinions, visiting consult authority and discussion with colleagues and different research articles regarding the use of PPE was references to conduct this research. Questionnaire was pretested and modifications was done if needed.. Questionnaire was back translated English to Nepali language. Face to face interview was used as a technique for data collection and analysis were done by SPSS 17 version. Descriptive study was done to determine the use of PPE. Chisquare test was applied to findout the association between the dependent and independent variables.

Most of the workers (68.1%) regularly used all relevant PPE in work whereas 31.9% workers didn’t used PPE regularly. More than half (57%) respondents uses the PPE when they needed, 35% respondents use PPE all the time during working and only 8% respondents uses PPE only in the start time of the work. The main reason for not using of PPE by respondents were not availability of PPE (33.3%) and no necessary of using PPE (66.7%). (Table 1)

The results showed that 88.4% workers use of any type of PPE in Beer industry, 79.4% in Rio industry, 96.4% in Wafer industry, 91.3% in chips industry and 75% workers use PPE in cheeseball industry to ensure health, food and body safety in workplace. (Table 3)

Out of 187 respondents 32.1% workers had faced any type of health problems or hazards under working conditions in industry. Among them most of the workers are suffered from Accidents/Injuries which accounts 60%. The main cause of the health problems/hazards among 60 respondents 75 % was due to the work load, 18.3% was due to chemicals, dust, fumes etc and 6.7% was from lack of PPE provision. Similar study was conducted among cement workers in Arab Emirates showed that only 52.9 % of the workers knew the hazards other than the dust that were associated with their work.1

Study by Saowanee Norkaew suggested that regular public health education and training programs including how to use appropriated PPE should be organized for the workers to improve their ability to handle practices and health.11

Only 12.8% workers didn’t uses any kind of PPE in Chaudhary Group of Industry. The main barriers of not using the PPE were non-availability (33.3%) whereas rest of the workers told there is no necessary (66.7%) to use PPE while working in industry. Similarly another study among garment workers in Tamilnadu of India found non-availability (18%) were the reasons stated by workers for non use of PPE.8

Another study on KAP regarding usage of PPE in at trade village of Vietnam found that 29% of the respondents have ever used at least one kind of PPE (71% didn’t use any kind of PPE).The majority of the Craftsman was not using PPE because they believe that use of PPE is uncomfortable. But in this study,more than two quarters workers didn’t feel any uncomfortable of using PPE that might influence the increase in the use of the PPE in workplace.9

Among the PPE users in Chaudhary Group of Industry most of the workers (79.8%) start using PPE since they joined in industry. Most of the workers (68.1%) regularly use all relevant PPE in industry whereas 31.9% workers didn’t use. More than half (57.1%) respondents use the PPE when they needed, 35% respondents uses PPE all the time during working and only 8% respondents uses PPE only in the start time of the work. Similar study conducted by Taha AZ in three industries of Saudi Arab conducted in 2000 AD showed that 12% used personal protective measures all the time while 60% did not use any type of PPE. The main reasons given for not using PPE were non-availability of equipment and that the equipment was too heavy causing inconvenience. A variety of preventive measures and PPE were mentioned, their use was unsatisfactory.12

Large portion(93.3%) of workers found change after using of PPE. Most of the workers (89.3%) were found to be encouraged by their co-staffs and officers for the use of PPE which ensure the effectiveness regarding use of the PPE in industry. It is found there is the regular provision of replacement of the wornout, infected PPE which is the effective reason behind high practices of PPE and low health hazards.

The findings of this study have quiet good practice regarding the uses of PPE by comparing with the results of others similar studies with this study. It might be due to the workers knowledge on PPE, training regarding PPE, types of industries were research were conducted, provision of PPE, incidence of health hazards/problems, workplace environment, years of experience of working in industry which are clearly illustrated as above.

It is found that majority of workers (more than three quarters of respondents) use the PPE in Chaudhary Group of Industry, Nawalparasi.

It is recommended that formal information, education and training on proper uses of PPE should be provided to workers to ensure workplace safety in industry and to reduce workplace hazards. Need of research and indepth studies to assess the industrial health risks.

I would like to extend my sincere graduate to Mr. Ishor Sharma for his supervision during this work. My special thanks goes to Mr. Hari Kafle, Mr. Sudarshan Subedi, Mr. Chiranjivi Adhikari for their valuable suggestion, guidance and support during my research work. I would like to remember my loving family, Mr. Sanjay Adhikari, Mr. Jeevan Bhatta, Mr. Diwash Timilsina, Mrs Roshna Raj Bhandari and classmates of School of Health and Allied Science, Pokhara University.

3. Ziauddin A. A study on knowledge, attitude and practice of personal protective equipment in Visakhapatnam steel plant. Jr of Industrial Pollution Control 2006;22:89-92.