Life expectancy is ‘the average period a person may expect to live’1. Almost universally, females live longest, as do MEDC dwellers. Globally, life expectancy has increased by 40% in the last 50 years (1960s: 50 years – present: 70 years). However, this is just an average so there will be extremes, for example, the oldest recorded person alive now is almost 116 years6 and there are babies that die within days of birth.

Technology means developing, applying or studying tools and methods, thus, in context: the machinery used in hospitals; access to knowledge for educational health; and the development and use of medicines.

In my family, life expectancy has stayed constant as my great grandparents lived into their eighties, two of my grandparents are still alive (aged 80), although one died at 48 years*. However I think that my brother, my cousins and I will survive for longer, given that my ancestors died from rare, non-genetic causes like cancer and brain haemorrhage. *My great grandfather was in the Great War and was shell shocked and spent the rest of his life in a mental hospital.

I believe that the main cause of improved life expectancy is the rate of the country’s technological growth but there are other factors, some natural, some human (Table 1)

There exists a correlation between population size and area and life expectancy, especially if we look at ‘extremes’, for example Monaco is the smallest country in the world, by area and almost population, and it has the highest life expectancy rate of 85 years for males and 93 years for females2. Similarly, China has the biggest population and has one of the biggest areas in the world yet it is in the top 100 for life expectancy and is rising with its population2. This might suggest that it is easier to provide access to smaller and larger concentrations of people, but then in the UK, we know that many rural dwellers often have to travel in excess of 40 miles to reach a hospital. This could prove fatal in terms of an emergency if people can’t be reached in time, thus this is where telecommunications technology and internet accessible health education (what to do if a person has a heart attack or stroke) are vital. I am very fortunate to live in an urban area and I have two hospitals within 15minutes drive of my home.

Lifestyle choices affect the life expectancy of a person because someone might choose to eat healthily and exercise regularly and so, in theory, have a higher life expectancy than someone who chooses not to. This is a social factor, controlled by personal decisions, but it is mostly an MEDC issue. In LEDCs people often have little/no choice about their lifestyle as they may be limited by food/water supplies. Access to educational information via internet technology may help people make informed choices and improve life expectancies but if disregarded, then access to technology is of no benefit.

Personal income is also a key determining economic factor. Those with more disposable income will have more opportunity to access health technology and more easily afford healthier food choices, which should result in improved life expectancy. However, it can result in poor lifestyle choices like over-eating or binge drinking so can have the opposite effect. This is unfortunately common in MEDCs, particularly the UK and USA, exacerbated by ‘supersize me’ in food outlets and BOGOF offers in supermarkets.

Technology & its impacts on life expectancy

The true effects of technology on life expectancy depends on how you define technology;

If you define technology as the access to information via the internet I would have thought that the world’s life expectancy would have reacted positively to the exponential growth of internet users in the last 20 years in figure 2. Figure 1 does show that the world’s life expectancy has increased in gradient but only very slightly steeper to the rate of growth before the early 90s. 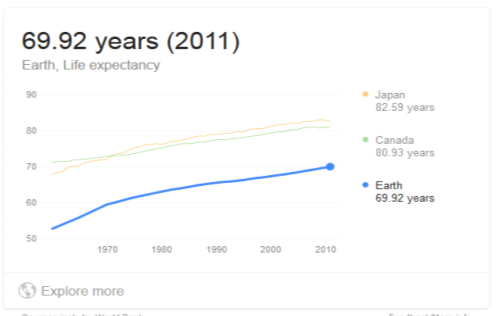 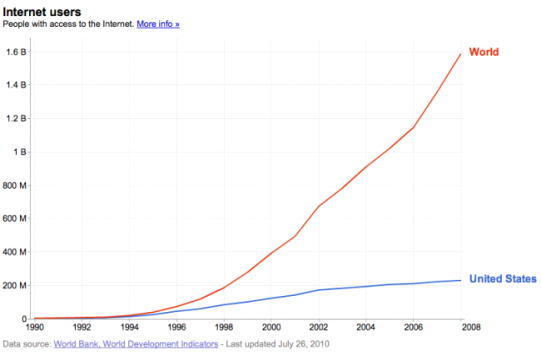 Mobile phone technology enables people to access information about healthy lifestyles. I have a smart phone which can help me access information on any issue I might have with my health so that I can try to combat it. Nationally (UK), there is 97% coverage of the country, which enables almost everyone with an internet enabled phone or broadband connection to access. OAPs are encouraged to gain internet skills via free classes available at local libraries.

Continually evolving technology is bringing new developments into existence like 3D printers that can bio-print specific organs to replace failing ones although only a bladder has been printed so far. Personally all of my family have had scans sometime in their lives to diagnose specific illnesses or injuries that, if they and not been diagnosed, might have caused a lower life expectancy, eg bowel cancer screening and breast cancer screening.

Technology can only hold the key to improved life expectancy if it is properly managed. Trained professionals are needed to operate scanners in hospitals and governments in LEDCs might not be able to afford them or to provide the training to get them and so technology would be irrelevant and ineffectual. Technology is also ineffective in places where infrastructure is either poor or non-existent e.g. electricity and internet access.

One of the biggest factors that affect life expectancy in LEDCs is maternal and infant health. Maternal and infant mortality rates are higher in LEDCs, further contributing to lower average life expectancies. If we can ensure safer births, we can improve life expectancy and the need to have so many children. This is where technology could come into play to assist midwives in challenging situations. Even without access to electricity and internet, updated written literature and health/hygiene guidance could be provided to help the situation. You could argue that this isn’t technology, but actually you need technology to design, print and distribute the books. And with the relatively new invention of the 3D printer, organizations could make models for midwifery that teach them in a practical way.

If everyone in the world had access to technology I do think that globally life expectancy would increase significantly simply because of the sheer wealth of information available on the internet and people being able to gain health education. But the likelihood of everyone having access to technology in the future is low. For some, eg indigenous tribes and small groups isolated from modern civilization, there is a desire to remain untouched by external influences. Charities and wealthier governments could continue to send appropriate technology to LEDCs. I also believe that technology will develop further in the future and will eventually be able to help eradicate diseases and cancers.

I think that technology is key to improved life expectancy and I think in the future it will become the biggest influential factor. This is because other factors, I believe, will be controlled by technology. People will be able to make informed decisions regarding lifestyle choices and risks of poor lifestyle choices. If this doesn’t stop them from choosing that lifestyle then the technology is there to help them with the ‘side effects’ or ‘symptoms’. Hereditary conditions will be easier to treat and cure, I think, enabling improved life expectancy. Quality of life, I also believe, will be enhanced by technology eg better quality housing. Technology is also getting cheaper by the year so should be more affordable. In the future access to clean water won’t matter either because if there is an unclean water supply then filters can be fitted. Technology is (and will even more in the future) helping to reduce fatalities from happening when natural disasters occur by, simulating, in the process of building buildings that are less likely to fall, and aiding response times for emergency services to be faster.