Describe how your laboratory would deal with this specimen?

After fixation, the next step would be grossing or known as “cut-up”, in which in this case the liver specimen need to be dissect into small pieces in order to be fit into the cassettes. After the specimens being put in the cassettes, it is then being load onto the tissue processor for processing through the wax. Tissue processors are used for preparation of paraffin section (Rolls Geoffey, 2011). It will allow the specimen to be in a molten paraffin wax state after a sequence of different solvents infiltrated in the specimen (Rolls Geoffey, 2011).

Which specific test could be performed within your histology laboratory to assist in the diagnosis? Why did you choose these?

Based on the received liver core specimen, it shows that the total iron body content is quite high which about 20gm. Thus, the most specific test to assist in the diagnosis of the iron concentration is Perl’s Prussian blue test (PPB). Perl’s Prussian blue stain is the major histochemical stain that is used to detect as well as identified the ferric iron (Fe3+) in particular tissues [4]. By the principle of hydrolysis of mineral acid, this ferric ion then is being released from the deposition of tissues, which are protein bound. Based on chemistry’s concept itself, iron in ferric state wills formed ferric ferrocyanide since it is reacted with hydrochloric acid. Thus, this makes the insoluble blue compound visible [5].

There is no colored product by ferrous ions themselves, thus their reaction cannot be seen. Within this technique, usually red in color will represents a nuclei in that particular normal cell, yellow in color for erythrocytes, deep blue stained for ferric salts and lastly, stained as blue or black for the asbestos bodies. The stain is composed of aqueous hydrochloric acid, aqueous potassium ferrocyanide and a neutral red stain[6].

Measuring 10ml of hydrochloric acid, which is about 2% in concentration, starts the staining method. Then, 2% of potassium ferrocyanide was added and ensure that the mixture mixed thoroughly by shaking hem well. Next, placed the slides on the rack for staining step and carefully filtered the solution onto the slides and leave it with that solution for about 15 minutes. Later, carefully removed the excess solution from the slides by rinsed it using the distilled water. The step continued by filtered 1% of neutral red onto the slides and leaves it for about 5 minutes. The purposed of this step is to let the slides for having the capable time so that it will be able to attach to the dye completely [7]. About 5 minutes later, thoroughly rinsed the slides by using distilled water to remove any excess dye, which has not been attached to the cells components. The washing step should not be decreased below 5 minutes as thorough washing is required to prevent a heavy dye precipitate resulting from the neutral red counterstain [8]. The slides are then are blotted by using filter papers. Quickly, the slides were rinsed in 70% of industrial methylated spirit and at the same time agitating the slide by making a slosh up and down. Then, placed the slides in absolute industrial methylated spirit (100%) and further agitated for another one to two minutes.

Finally, always placed the slides mount in a DPX-type mountant since other mounting media results in fading of the stain. Again, the slides were agitated for about 2 minutes to ensure that there was no gas trapped in the slide [9]. Then, covered the slides with cover slips by placing a mountant upon the cover-slip which is to cover the section on the slide and the slide removed from DPX and then was gently touched on the side of the slide with the section to the cover slip.

What are the expected results from the staining methods you have chosen?

The pattern of iron deposition can be obtain with the help of iron staining.4 The iron stain shows the features of the possible cause of excess iron in the body. 4 The degree of the iron deposition and many grading methods exist to grade the extent of deposition in the liver by using iron stain.4 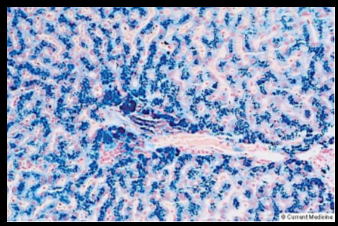 This is the result obtain from the patient’s liver core specimen. It can be seen in the Figure 1 of large blue granules mark. This is how the presence of iron in the cell. The nuclei pigment appears red and the iron pigment appears deep blue in color with the Prussian blue stain. This means there is excess of iron stored in the liver of this patient.3

What additional non-histological tests would you recommended to the following clinican? 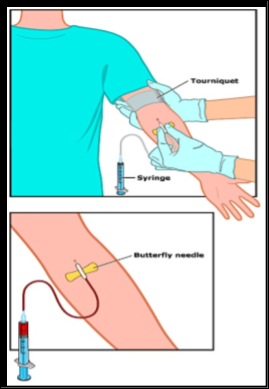 For the additional non-histological tests, serum ferritin blood test is recommended to be used by clinician in order to detect the content of iron in patient’s body (Adams P, 2008). It is an enzyme-linked assay that can be performed on blood sample from nonfasting patient (Adams P, 2008). 70% of the total iron store in patient’s body can be found in her haemoglobin while the 20% of the total iron stored as ferritin (Hicks R, 2013). The increase or decrease of ferritin level will indicate the changing of iron level in her body (Hicks R, 2013). The normal serum ferritin level is not more that 200ng/ML in women and normal iron level in human body is about 5 gram (Hicks R, 2013).

Provide one provisional diagnosis for the case study and one differential diagnosis (possible alternative).

For this case the 40-year-old post-menopausal woman presents and claimed that she had a long term lethargy, loss of sex drive, abdominal pain for 2 months and discoloration of the skin. Based on the symptoms presented the most probable provisional diagnosis for her is Hemochromatosis as the symptoms presented are quite identical (Table 1). Hemochromatosis is the most common form of iron overload disease, in this cases the total iron body content recorded was 20g, where the normal iron levels for women ranges from 12 to 15.5g of hemoglobin per deciliter of blood[2]. Primary hemochromatosis or else known as hereditary hemochromatosis, is an inherited disease meanwhile, secondary hemochromatosis is caused by anemia, alcoholism, and other disorders[1]. The Hemochromatosis causes the body to absorb and store too much iron. Apart, the extra iron builds up in the body's organs such as liver, heart and pancreas can lead to an organ damage[1].

There is also another type of diagnosis and it is called a differential diagnosis or possible alternative. The differential diagnosis is the process of comparison among diseases exhibiting similar sign and symptoms[3]. When a patient has symptoms that are common to more than one disease or condition, the medical professional will make a list of the possibilities, and then eliminate them based on the symptoms that may not fit some of the possibilities[3]. In this case, when evaluating a patient with suspected hemochromatosis, alcoholic liver disease and multiple transfusions should also be considered[2].

Hypertransfusion is performed in patients with sickle cell anemia, beta thalassemia major and also myelodysplastic syndrome[2]. Such patients may receive as many as 100 units of red blood cells, which may contain as much as 20-25 g of iron, similar to or more than the amount retained in many symptomatic patients with hereditary hemochromatosis[2].