Objectives: We conducted this study to find out any epistatic relationship between expression of PTC gene and the genes controlling T2D development through comparing the relative frequency of PTC taste perception among T2D patients and healthy subjects.

Methods: It was a case-control study conducted in diabetes clinics / centers located at various teaching hospitals in Lahore city. A total of 270 (135 diabetics and 135 healthy) subjects were tested for PTC taste perception by pouring a drop of PTC solutions of 0.0125%, 0.125% and 0.25% concentrations to determine super-tasters, tasters and non-tasters. The proportion of tasters and non-tasters was compared in two study groups with the help of Chi Square test and a p value of 0.05 or less was considered significant and to reject the null hypothesis.

Conclusions: Supertasters and tasters of PTC have odds ratios of 0.4624 and 1.788 to have type 2 diabetes mellitus.

Phenylthiocarbamide (PTC) taste perception is a genetically controlled trail.(1) Type 2 diabetes mellitus (T2D) is a widely occurring multifactorial disease with complex multigenic inheritance playing an important role in its pathogenesis.(2, 3) Interaction of genes conferring inheritance of T2D, pre-diabetes and obesity and those causing PTC taste perception has not been studied in detail though some investigators have highlighted that a possible link exists between the phenotypic expressions of these gene complexes.(4-6)

We conducted this study to find out any epistatic relationship between expression of PTC gene and the genes controlling T2D development through comparing the relative frequency of PTC taste perception among T2D patients and healthy subjects.

It was a case-control study conducted in three diabetes clinics located at various teaching hospitals in Lahore city i.e. Jinnah A Diabetes and Endocrinology at Jinnah Hospital Lahore, Diabetes Management Center, Services Hospital Lahore and a diabetes clinic at Sheikh Zayed Hospital, Lahore. A sample of 270 (135 diabetics and 135 healthy) subjects was taken by simple random sampling technique with the help of lucky-draw method among the patients attending these clinics and their attendant/relatives who were non-diabetic. The confirmation of non-diabetic status of the control group participants was obtained by their random serum glucose < 140 mg/dl and by the fasting serum glucose <110 mg/dl if the random glucose was between 140 and 199 mg/dl. Informed consent was taken and participants were asked to spit the solution of PTC as soon as the taste perception was noticed. All participants were tested for PTC taste perception by pouring one drop of PTC solutions of 0.0125%, 0.125% and 0.25% concentrations to determine their taste perception as super-tasters, tasters and non-tasters for PTC compound. The proportion of tasters and non-tasters was compared in two study groups with the help of Chi Square test and Fisher Exact test. P value of 0.05 or less was considered significant and to reject the null hypothesis.

Mean age of T2D patients and healthy subjects was 34.21±5.74 and 32.90±7.44 years respectively and there was no significant difference of age distribution among two study groups as shown in Table 1. 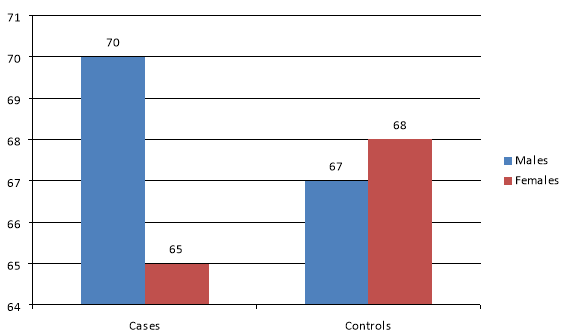 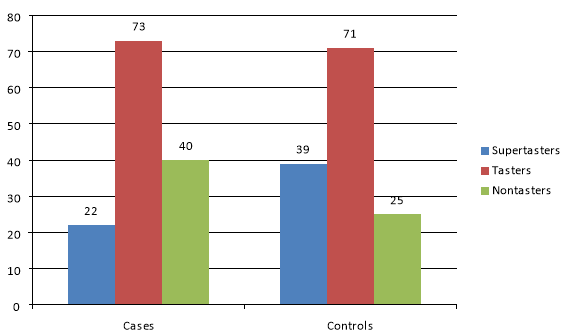 Figure 2. Frequency of super-tasters, tasters and non-tasters in T2D and controls

Perception of bitter taste is a variable trait both within the same population and between different human populations.(7) Bitter taste perception is encoded by a family of 25 TAS2R taste receptors.(8) Whereas, the two most studied genes are TAS2R38, the one associated with the ability to taste PTC (phenylthiocarbamide) and PROP (6-n-propylthiouracil).(9) Approximately 75% of the world’s population are considered ‘‘tasters’’, and perceive these substances as moderately to intensely bitter. These compounds are weak or tasteless for the remaining 25% of the population, who are considered ‘‘non tasters’’.(10) Another study revealed that tasters can be further divided into two sub-groups: “ tasters”, who perceived moderate intensity from PTC/PROP, and “supertasters” who perceived these compounds as extremely bitter. Thus, the population distribution of non tasters, tasters and super tasters is nearly 25%, 50% and 25% respectively.(11)

In current study, the distribution of PTC taste perception for non-tasters, tasters and super-tasters was 25 (18.5%), 71(52.6%), 39 (28.9%) among the healthy controls which is quite comparable to the findings of Bartoshuk et al.(11) A study from American population showed that 71.2% of their study population was taster and 28.8% was nontaster.(12) A study from a neighboring Asian country reported that taste perception to PTC compounds was present (tasters) in 67% and absent (non-tasters) in 33%.(13) Another study from same Asian country reported that 66.38% of the study population was taster and 33.62% was non-taster to PTC.(14) However, a study from a Pakistani population of young healthy adults revealed the distribution of PTC tasters and non-tasters as 73.75% and 26.25% respectively.(15) Similarly, another group of investigators from Pakistan reported that 81.33% of the healthy adults were tasters and 18.6% were non-tasters.(16) Our observations are comparable to both the studies especially prevalence of non-tasters in our study is approximately the same as reported by Iqbal et al.(16)

The second point of discussion in current study is the phenotypic association between the genes encoding for PTC taste perception and diabetes which has been studied by the procedures and methods mentioned earlier. Why the authors did conduct this study? A simple answer is the compelling and enormous links between diabetes and taste perception proposed in the recent literature.(17-19) A study has revealed that increased serum glucose levels induce a concentration-dependent impairment of taste perception in T2D patients as the result of an adaptation of the sensory cell to elevated circulating concentrations of glucose.(5) A study from an Asian population revealed a significant difference in taste sensitivity to PTC between the diabetics and non-diabetics, the former being less sensitive than the latter (16.7 vs. 6.8%).(20) A decrease in palatability of the glucose solutions induced by the glucose load (negative alliaesthesia) has been reported between PTC tasters and non-tasters where tasters showed higher hedonic ratings (Mean 4-25), as compared to non-tasters (Mean 3-70) and this difference was more evident after the glucose load in non-tasters.(21) More recently, genetic analysis of bitter tasters and non-tasters have shown that a polymorphism in TAS2R38 is associated with differences in ingestive behavior of the two groups, which may in turn be linked to the development of pre-diabetes and T2D.(22) However, by far the most delectable observations have been reported by Wang et al., who observed significant differences in plasma levels of leptin, tumor necrosis factor-alpha and insulin-like growth factors-1 between tasters and non-tasters to PTC.(4) They also found a positive correlation between plasma levels of glucose and body mass index (BMI) exclusively in non-tasters which indicate that besides the regulation of food consumption, taste perception also appears to be snugly linked to the circulating metabolic hormones.

It is proposed by the previous investigators and supported by the authors of current study that people with different taste sensitivity may respond differently to the nutrient stimulation. More robust investigations probing into the link between taste perception and peripheral metabolic control could potentially lead to the development of novel therapies for obesity or Type 2 diabetes.

Supertasters are less whereas tasters and non-tasters are more likely to have type 2 diabetes mellitus. Further work is encouraged to unveil the link between taste perception to PTC and T2D.

We acknowledge the participating institutions, their staff members, patients and healthy volunteers for their cooperation. We are thankful to Prof. Dr. Tehseen Iqbal, Professor of Physiology at Dera Ghazi Khan Medical College, DG Khan, Pakistan for his critical, analytic and logistic help without that this research would have never been completed.

19.Gascon C, Santaolalla F, Martinez A, Sanchez Del Rey A. Usefulness of the BAST-24 smell and taste test in the study of diabetic patients: a new approach to the determination of renal function. Acta Otolaryngol. 2013 Apr;133(4):400-4.