ABSRACT: Breast disease in females causes great deal of anxiety and fear of carcinoma and thus losing it. Not all breast diseases and lumps are carcinoma. To study this enigma of females, patients with breast symptoms were studied for 12 months of time Jan 2013 to Dec 2013 in unit iii, dept of surgery, Hamidia hospital, Gandhi medical college Bhopal.

Study was conducted to determine the incidence, role of histopathology and imaging in diagnosis and management. The disease is complex group of symptoms and sign such as lump, mastalgia, nipple discharge and combination of these. This was done so as to differentiate and identify the benign group which was much larger in number. They require more counseling, assurance and education regarding benign nature and it being a developmental disorder. Such disorders if untreated may convert into disease which is more persistent.

The mean age was 32 as the youngest was age of 14 yrs and the oldest was of 50 yrs of age. The commonest diagnosis was fibroadenoma followed by fibroadenosis . Tuberculosis was the most concerning disease we came across.

INTRODUCTION: Majority of patients having sign and symptoms of breast disease fall under benign group rather than carcinoma yet carcinoma takes the precedence over it due to its fearsome nature.1,2,3,4 The benign breast disease group patients have variable symptoms including lump, lump with pain, nodularity, nipple discharge due to relative heterogeneous underlying pathology.5Breast development is governed by growth hormone and cortisol. Breast function is governed by oestrogen progesterone prolactine and oxytocin. Breast undergoes dynamic cyclic changes governed by these hormones and growth factors. 15 These hormones have profound trophic effect. These changes are seen in epithelium and stroma from onset of puberty to menopause. Estrogen have effect on ducts where as progesterone have effect on epithelium. With the onset of puberty there is decrease in sensitivity of the hypothalamus and pituitary axis to negative feedback and increased sensitivity to positive feedback of estrogens. This initiates GnRH, FSH, LH causing increase in estrogens and progesterone which is the cause for menstrual cycle. This increase is responsible for proliferation of epithelium, duct and stroma. These changes may lead to Aberration in normal development of breast and involution of breast, causing majority of benign breast disorder. These disorders may convert into disease if untreated.

Exaggerated response to hormones oestrogen causes development of single or multiple proliferatory breast diseases such as fibroadnenoma which is benign solid mobile mass which has both fibrous and glandular part.11 Fibroadenoma of more than 10 cm are termed as phylloids tumor owing to shape it attains due to large size.

Such proliferation may have atypical hyperplasia including ductal and lobular hyperplasia, which has increased risk for development of carcinoma in future. Apart from this, multifocal lesions with calcification increase many fold risk.6,7.8

Then there are symptoms of nipple. As a developmental defect there may be nipple inversion which may present as subareolar abscess in later age. During involution phase there is ductal involution causing ductal ectasia if not treated can lead to periductal mastitis or may sometimes have atypical hyperplasia.6

During lactation the breast undergoes many dynamic changes and if there is problem in expression of milk there may be occurrence of breast abscess. If not treated adequately may lead to chronic breast abscess, antibioma and milk sinus.

To certain the diagnosis of usually neglected and underestimated disease there is a huge role of histopathology and imaging technologies.

With the help of histopathology proliferatory , non proliferatory disorders and diseases, breast cyst and other pathologies such as tuberculosis and lipoma can be detected. 20 There is a role of microbial culture in diagnosis of infectious disease. Similarly ultrasonography is helpful in diagnosis and in management also.13,22

Triple assessment test, which include clinical examination imaging and histopathology examination is the gold standard approach to the diagnosis though elderly females may require mammography.20,21,22

We have conducted study to determine the frequency of the disease, to analyze the role of triple assessment and to know implication in management. 13,15 16

Our study was conducted for one year in Jan 2013 to Dec 2013, under unit 3 Dept. of Surgery, Hamidia Hospital, Gandhi Medical College. We included all the patients coming to surgery OPD with breast complaints.14 Informed consent was obtained from all the patients. Patients were recorded under following points:

In first age group the most common complaint was lump in one of the breast or both. Most of these patients did not have complaints of pain. It was followed by lump with pain. We did not have any patients with complaint of nipple discharge in this group.15,16,17

In second group most common complaint was lump in breast with pain and bilateral generalized breast pain without lump and nodularity which were grouped under mastalgia.

The third group was lesser in number. They were mainly having complaints of lump, fever and pain. There were very few patients in fourth group and complaints were that of pain and nipple discharge.

There were 40 patients who were diagnosed as fibroadenosis. All patients underwent FNAC one patient showed atypical hyperplasia. 6,7,8

After this, the next common diagnosis was that of breast abscess which was common in lactating females.

The diagnosis which worried us the most was that of tuberculosis of breast. We found 10 cases of this disease presenting as chronic and recurrent breast abscess, showed mycobacterium tuberculi in culture.1

8 We also found 6 patients of antibioma and 2 patients of galactocoele. There were patients of ductal ectasia and one patient of lipoma and one of breast cyst.

Patients having significant symptoms of pain but not found with any lesion on radiographic investigation were labeled as mastalgia. Out of 7 only 3 were cyclical and rest were not related to cycle. 15,16,17

MANAGEMENT- Out of 62 patients of fibroadenoma, there were 18 patients with lesion less than 2 cm as detected clinically and confirmed by ultrasonography .these patients were treated conservatively.22 Surgery was proposed to all other 44 patients 40 patients consented for surgery and were operated, in all these excision was done under anesthesia.12

We registered 40 patients of fibroadenosis, in 6 patients excision of the most painful and noduler area was done rest of the patients were treated conservatively by oral medication of evening prime rose oil and vitamin E. In patients not getting relieved by above, Danazol which is an anti gonadotrophin was found useful. As it is having androgenic effects non compliance was observed in most of the patients. In one patient with FNAC showing atypical hyperplasia excision of affect quadrant with subsequent follow-up was done by series of mammography. As patient with atypical hyperplasia, multi focal lesion with calcifications have many fold increased risk for developing carcinoma 6,7,8 Patient was subjected risk reduction strategies like yearly mammography, stopping oral contraceptive pills and hormone replacement therapy if any.6,7

In patients with mastalgia cyclic or non cyclic patients are treated with conservative manner by life style modification, eating low fat diet and avoiding caffeine. After ruling out infection pt responds well to NSAID and Danazol.

All 12 the patients of breast abscess were treated by surgical I&D. microbial examinations were done all the cases.21,23

10 patients came history of presence of lump and pain and low grade fever and malaise, on ultrasonography showed hypo echoic lesion suggestive of abscess showed presence of mycobacterium tuberculi in abscess wall biopsy and were treated by anti tubercular treatment.18

Patient with antibioma were treated in conservative manner in lactating women where as in non lactating open drainage and curettage was done.

There were two patients of galactocoele and one of breast cyst in which aspiration was done.

One patient of breast lump after excision biopsy was diagnosed as lipoma.

All the patients with complaints of nipple discharge underwent cytological examination of discharged fluid. There was one patient of ductal ectasia which on ultra sonogrphy showed ductal pappiloma for which microdochectomy was done.

Patients with bilateral breast pain with cyclic nodularity were diagnosed as mastalgia. These patients underwent series of ultrasonography but no focal lesion was found. In patients with mastalgia cyclic or non cyclic patients are treated with conservative manner by life style modification, eating low fat diet and avoiding caffeine. Patient responds well to NSAID and Danazol.

When a female notices breast lesion she undergoes great degree of anxiety due to apprehension of gruesome carcinoma which causes breast lose and most fearful disfigurement.1.3.4 Benign breast diseases are much more common than malignant lesions but the aggressive nature of carcinoma takes the precedence of the worry.9 Thus it the most important priority of surgeon to reach up to a definite diagnosis and once the carcinoma is excluded the patient should be reassured and educated for further follow up.10,23 It is also there for prolonged period of time and requires counseling and reassurance apart from definitive treatment.

The common age group for BBD is younger age group, who have less say in the family. The symptoms are considered trivial and discomfort converts in pain.

In Pakistan study done by Batool et al at Lahore, out of 63 patients of BBD there were 38 patients of fibroadenoma.

In above studies there less incidence of tuberculosis which is 6.2% in our study. This the matter of concern and required more follow ups. In developing country especially in rural area the treatment of breast disease poses lots of problem care system due to social stigma, illiteracy poverty and lack of availability of authentic health care system.

The disease of breast which is concluded to be benign may be trivial for family members but it imposes substantial anxiety and affected day to day life of sufferers.9,23

The mean age affected was 32. The common benign breast disorder which we came across is fibroadenoma which is more common in young age.12,19,23 They are best treated surgically though small sized can be managed conservatively with good follow up. The disease variant of this disorder phylloids tumor needs more diagnostic confirmations to rule out malignancy, excision and follow-ups.

Fibroadenosis and mastalgia patients suffer more as there is no surgical cure and the conservative management is not very affective. Anti gonadotrophins due to androgenic side effects are not tolerated well. Anti oestrogen drugs also do not have good compliance due to systemic side effects like flushing and nausea and vomiting as they are to be consumed for prolonged period of time. Periodic NSAID and lifestyle management was more accepted.

Infectious disease were found commonly in lactating females Main concern were patients of tuberculosis which are 6.28 % of all patients and much higher in no. than other studies we came across. 18This was more common in age group of 20-30 yrs. Though all mentioned patient were treated completely to our satisfaction.

With senescence, there was complaint of nipple discharge in elderly patients due to ductal ectasia and periductal mastits. It required more detailed and dedicated approach so as to rule out the carcinoma which is higher in this age group. 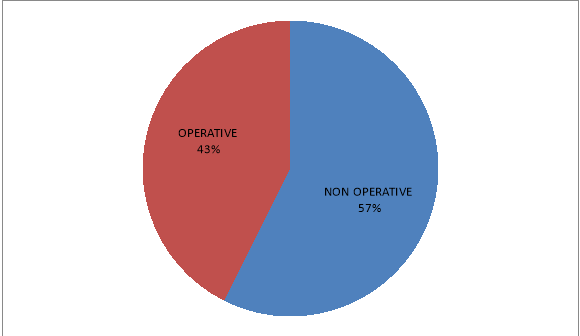 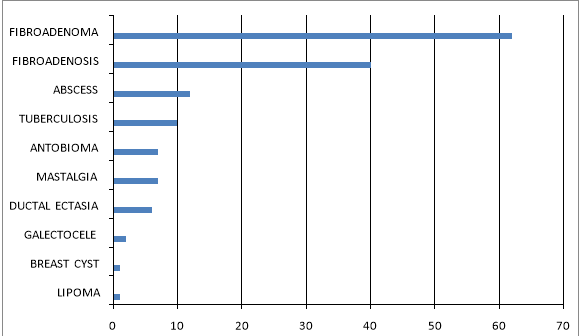