$These authors contribute equally to the article.

Objective: This study screened a human placenta growth factor (placental growth factor, PlGF)-specific binding peptide, which is the theoretical basis for further study of the function of PlGF and its role in the targeted therapy and early diagnosis of ovarian cancer.

Methods: Human placenta growth factor (placental growth factor, PlGF) was selected as the target antigens for the PCR amplification to get a DNA library containing random 10-peptide. Ribosome display technology was used to screen the DNA library. The affinity between the 10-peptide and target proteins was confirmed by ELISA method, and its affinity constant was calculated. FITC-labeled and Quantum dot-labeled 10-peptide was tested by flow cytometry and confocal microscope respectively to confirm the targeted binding capacity in vitro with the ovarian cancer cell line (of SKOV-3).

Results: The DNA library we constructed has a storage capacity of 1.8 × 1012. We get five PlGF-specific binding peptide, named respectively P1, P2, P3, P4 and P5. Their basic sequence were TL / FSã€ WPA / TRSTSã€ WNWP and TS. P5 was confirmed to has a high binding activity with the target antigen PlGF. The functional affinity constant is (3.000 ± 0.253) x 106M-1. There is a strong binding capacity of up to 94.19% between P5 and ovarian cancer cells. P5-peptide conjugated quantum dot could recognize SKOV-3 cells specifically.

Conclusion: PlGF protein binding peptides collection is available through ribosome display technology. The peptides has a strong binding activity with PlGF which could be used for the targeted therapy of ovarian cancer and early diagnosis.

Ovarian cancer is one of common female reproductive system tumors. It is characterized by high incidence, high degree of malignancy, high mortality, infiltrative growth of tumor, rapid metastasis, poor response to drug treatments[1]. About 70% of patients were diagnosed at advanced stages. In order to promote the early diagnosis and treatment of ovarian cancer, ovarian cancer-specific markers and therapeutic targets related research is currently one of the hotspots[2].

PlGF is an important member of the VEGF family. It promotes angiogenesis through regulation of endothelial cells, smooth muscle cells and hematopoietic stem cells [3]. A number of studies confirmed that PlGF expression increased in a variety of tumor tissues, and it’s related with tumor stage, metastasis and survival rate [4]. Some studies have confirmed that the targeted PlGF or its receptor (VEGFR-1) immune therapy can inhibit tumor growth [5-7], indicating that PlGF is feasible as a cancer therapeutic target. The present immunotherapy drugs are mostly monoclonal antibody-based, which are easily inducing immune responses in the human body. They may be remained in the blood circulation instead of effective tumor tissue enrichment, because of their poor tissue penetration [8], thus losing the role of the “oriented” treatment. The development and application of the polypeptides oriented carrier may provide new approach to address this critical issue and therefore, screening of specific target gene binding peptide has become a research hotspot. In our preliminary experiments, we constructed single chain antibody library of ovarian cancer; screening with ribosome display technology, successfully got anti-PlGF single-chain antibody genes [9]. In the present study, we furtherly use the ribosome display technique to screen PlGF specific binding polypeptide, and to confirm the functional affinity constant, and thus provide a new method which has a broad prospect for the research and application of small molecule therapeutic agents.

TNT T7 Quick for PCR DNA was used for in vitro transcription and translation. Protein antigens were directly connected with tosyl-activated Dynabeads. All procedures were in accordance with the manual operation under 30 â„ƒ bath heat, the mixture (40 μl TNT T7 Quick for PCR DNA, 2.5 μl random DNA library, 1 μl 1 mM methionine, 0.5 μl 100 mM magnesium acetate, add with DEPC to 50 μl ) was heated in the constant temperature water bath for 30min. 40U DNaseI and 6 μl 10× DNase digestion buffer were then added into the obtained mixture (400 mM Tris-HCl, pH=7.5, 60 mM MgCl2,100 mM NaCl), and ddH20 was added to its final volume of 60 μl. Incubated for 15min under 30 â„ƒ, the above mixture was added the precooling 60 μl 2× dilution buffer (PBS containing 10 mM magnesium acetate) to be diluted.

Adding 1ï½ž2 μl prepared antigen-beads solution into the mixed solution, and jiggling it for 1 to 2 h under 4 â„ƒ. Eluting the magnetic bead for five times with 10 μl elution buffer (PBS containing 5mM magnesium acetate and 0.1% Tween20). Eluting the magnetic bead for two times with 100 μl precooling no enzyme water, and adding 10 μl precooling no enzyme water heavy suspension magnetic beads for RT-PCR. The PCR products were used for the next circulation, referred to as transcription – translation – screening. The screening was conducted for five rounds (Figure 1).

After the selection, RT-PCR products were sub-cloned into pUCM-T, which was then transformed into E. coli DH5α. Selecting the clones due to the principle of α-complementary for sequencing to analyze the DNA sequences. Plasmid DNA was isolated, purified from E. coli DH5α, and subsequently analyzed by sequencing.

The binding activities of peptides were determined using ELISA as described [9], with minor modifications. Wells were coated with PlGFï¼Œafter binding of synthetic biotinylated peptides, horseradish peroxidase-linked streptavidin (HRP-streptavidin) was added, and binding was detected via the HRP enzymatic activity. Peptide-streptavidin conjugates were prepared by mixing HRP- conjugated streptavidin with peptides in PBS/0.1% BSA/0.2% Tween-2, then the mixture was incubated at room temperature for 30 min. The peptides were omitted in negative-control preparations.

The PMAL-capped quantum dots (QDs) were prepared using a method reported in our previous work [10]. The prepared QDs were purified twice by ultracentrifuge at 45 000 rpm for 30 min. The synthesized QDs were dissolved in PBS for further experiments. P5 peptide was conjugated with QDs (at 605 nm wavelength) by using standard EDC-NHS reaction, at start molar ratio of PMAL-QDs to P5 peptide as 20:1 (P5: QDs)ï¼Œthe conjugates were then purified by ultracentrifuge twice. The dynamic radii and zeta potential of the QDs were measured by using a nanoparticle size analyzer (Malvern 2000, Malvern, England). The electrophoretic mobility of the prepared nanoparticles was determined by 0.8% agarose gel in TBE buffer at 100 mV for 30 min. The morphology and core sizes of QDs and QD–P5 were studied by TEM (JEOL. Ltd Inc, Japan). The QDs and QD–P5 solutions were dropped onto a copper net and observed by TEM after dehydration.

The SKOV3 and L99 fibroblast cells were seeded in a laser confocal microscopy 35 mm2 Petri dish (MatTek, USA) at a density of 1.0 × 105 cells and maintained for 48 h. QD-P5 complexes were prepared in serum-containing medium and incubated with cells for 4 h. Confocal images were obtained using Leica TCS SP5 confocal laser scanning microscope (Leica Inc., USA). To acquire fluorescence signal, each sample was excited at 450 nm with an Ar laser. A fluorescence signal of QD-P5 was detected at 488nm and 605 nm.

At least three different biopsies were used per experiment and measurements were taken in triplicate. Data are presented as the mean and the standard error mean (SEM), and the statistical significance of differences were evaluated with the one-way anova text (* p < 0.05 and ** p<0.001).

The designing and construction of DNA random library

The result of ribosome screening

The affinity of peptides

Biotinylate the peptides for ELISA reaction with HRP marked streptavidin biotin, BSA was the negative-control preparations. The ratio of A450 value to 2.1 times higher than as a positive decision criteria. P5 could be seen to have a high affinity with the target antigen PLGF (Fig3A).

Figure 3B shows the dose-response curves of binding of the P5 to the PlGF. On the basis of the curves, the affinity constant of the P5 was calculated to be ï¼ˆ3.000±0.253ï¼‰×106M-1, according to the method described previously.

The Binding Characteristics in vitro study

The fluorescence images of live SKOV3 (human ovarian cancer cell line) after 4h incubation with 200 nmol/L FITC- conjugated P5 for 4 h , or 200 nmol/L P5 for 4h followed by 200 nmol/L FITC- conjugated P5 for 4h, respectively, shown in Figure 4A. A significant number of peptide was mainly distributed in cytoplasmaï¼ŽFlow cytometry analysis also support the same result, two groups of fluorescence intensity has statistically significant differences (Figure 4B,C). The binding between FITC-P5 and SKOV3 was sable, and could compete with unlabeled P5.

Zeta sizer analysis showed that the particle size of QD-P5 was about 30 nm, and zeta potential was about -12 mV, switched the positive charge of P5 peptide after QD conjugation as showed in Figure 5. In order to confirm the targeted imaging of ovarian cancer cells, QD-P5 conjugates were incubated with SKOV3 cells and L99 cells respectively, then imaged by confocal microscope. Results showed that QD-P5 could specifically bind with SKOV3 cells while no binding with L99 fibroblast cells.

Regulatory peptide analogues represent a class of molecules developed for specific cancer targeting. In spite of having a relatively short history of about 2 decades, they are now receiving increasing interest, as they are often advantageously compared with immune-targeting antibodies [11]. These peptides control and modulate the function of almost all key organs and metabolic processes, and include neuropeptides present in the brain, gut peptide hormones, as well as peptides present in vascular (vasoactive peptides) and endocrine systems [12]. Peptide’s receptors are proteins over-expressed in numerous human cancer cells. These receptors have been used as molecular targets for labeled peptides to localize tumour. Therefore, specific cancer targeting through selective peptides for diagnostic and therapeutic purposes is considered to be a promising strategy in oncology.

Angiogenesis is one of the crucial events for cancer development and growth[13]. Two members of the vascular endothelial growth factor (VEGF) family, VEGF-A and placental growth factor (PlGF), which are able to heterodimerize if coexpressed in the same cell, are both required for pathologic angiogenesis[14]. PlGF peptide could be a new candidate for antiangiogenic gene therapy in cancer treatment by inhibiting VEGF-dependent angiogenesis. Here, we screen one PlGF peptide candidate for ovarian cancer targeting by ribosome display technology. In order to confirm the targeted recognization to ovarian cancer cells, the PlGF peptide was conjugated with quantum dots, then conducted the targeted imaging of SKOV-3 cells by confocol microscope. Results showed the high affinity of PlGF peptide with ovarian cancer cells, and coud target SKOV-3 cells specifically. Quantum dots has been widely used in tumor imaging study due to their unique flurescent properties. Quantum dots served as an imaging reagent here for targeted recognization of ovarian cancer cells. For the targeted ovarian cancer therapy, biodegradable materials could be used to replace quantum dots as drug carrier, after conjugated with PlGF peptide. 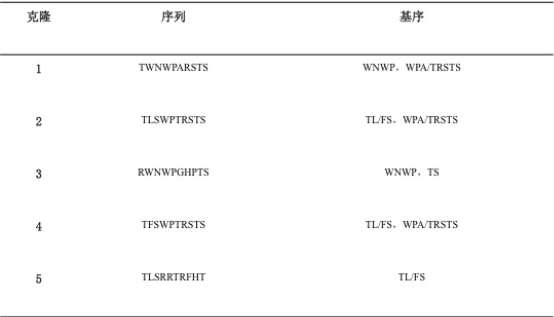 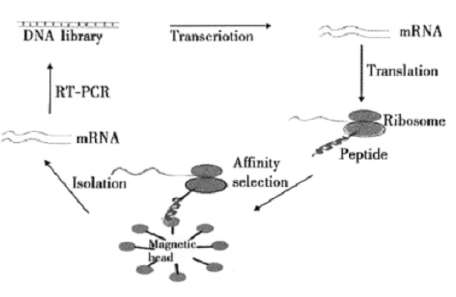 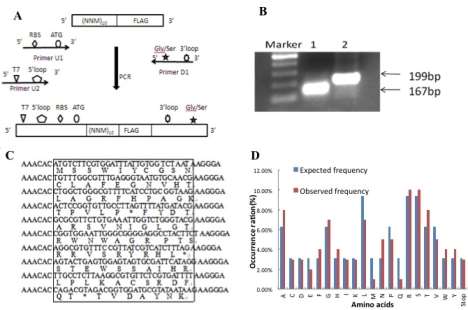 Figure 2. The designing and construction of DNA random library

Figure 3. Affinity of P5 PlGF peptide with PlGF antigen and the dose-response curves of binding of the P5 to the PlGF. 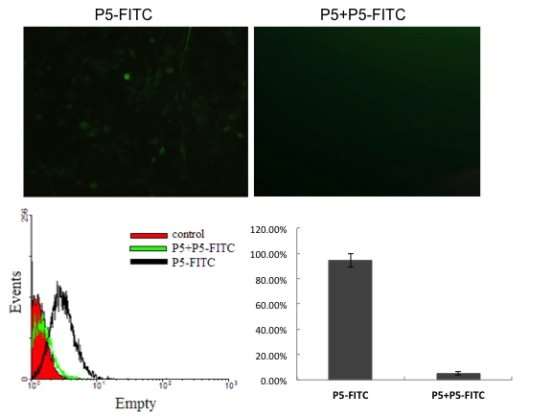 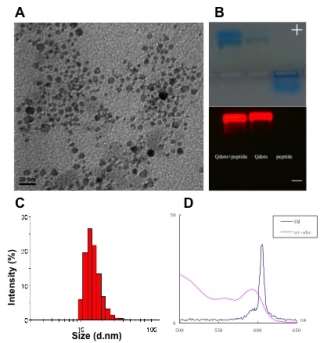