Rosai-Dorfman disease (RDD), also known as sinus histiocytosis with massive lymphadenopathy (SHML), is a rare histiocytic disorder which occurs due to the over-production of non Langerhans sinus histiocytes. It is a nonmalignant disorder that most frequently affects children and young adults and typically presents with fever, night sweats, nonpainful cervical lymphadenopathy, leukocytosis and an elevated ESR. Extranodal involvement may also occur which includes skin and soft tissues, nasal cavity, orbit, bones, central nervous system, salivary glands, kidneys, respiratory tract and liver. The digestive tract, heart and breast can also be affected but very rarely. The disease has an unknown etiology, although some viruses like Human Herpes virus 6 and Epstein Barr virus have been implicated as causative agents. RDD can often be misdiagnosed as lymphoma, leukemia or tuberculosis, so it is imperative to distinguish it from these conditions as well as other causes of histiocytosis because of the different treatment modalities. Diagnosis of Rosai-Dorfman disease is based on biopsy of affected tissue. Biopsy showing the presence of emperipolesis, or the engulfment of lymphocytes and other immune cells by histiocytes that express S-100 antigen is diagnostic of Rosai-Dorfman disease. Once diagnosed, further workup including imaging studies are undertaken in order to determine the extent of the disease. In majority of cases, the disease resolves on its own however, treatments including corticosteroids, chemotherapy, surgical treatment or radiotherapy are carried out in severe or persistent disease or when organ function is at stake (e.g. breathing obstruction, kidney failure, visual problems). The case we report is that of a 16 year old girl who presented with a 6 month history of gradual onset drooping of left upper eyelid with mild proptosis of the left eye alongwith mild drooping of right upper eyelid, low grade fever, night sweats and cervical lymphadenopathy. Blood workup showed increased ESR, CT scan of orbits showed superior orbital masses and diagnostic biopsy revealed Rosai-Dorfman disease.

A 16 year old girl presented to the outpatient department of Khyber Teaching Hospital, Peshawar, Pakistan in February 2015 with a six month history of gradual onset, painless left upper eyelid drooping alongwith low-grade fever and night sweats plus a 20 day history of gradual onset right upper eyelid drooping. She also noticed a few lumps in her cervical region. She had no significant past medical history of any major illness and no family history of tuberculosis or blood disorders was found. Her vitals were as follows, BP 120/80 mm Hg, pulse 90/min, respiratory rate 15/min and temperature 100.2 ÌŠ F. On examination she had bilateral painless cervical lymphadenopathy and bilateral superior orbital masses on palpation. Her vision was 6/6 in both eyes. Ptosis was seen in both right (3mm) and left (5mm) eyes. Mild left eye proptosis was also seen. Extraocular movements were restricted in upper gaze of both eyes, more so of the left eye. There was no evidence of any visceromegaly and the rest of the general physical and systemic examinations were unremarkable.

Incisional biopsy of the left Superior orbital mass was performed that revealed the diagnosis of Rosai-Dorfman disease. 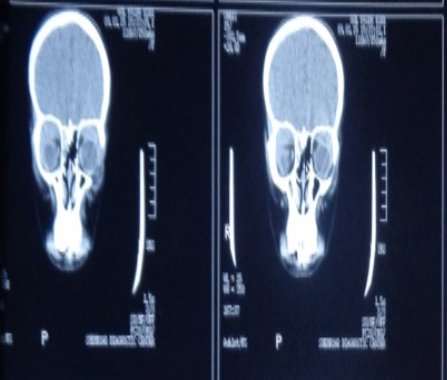 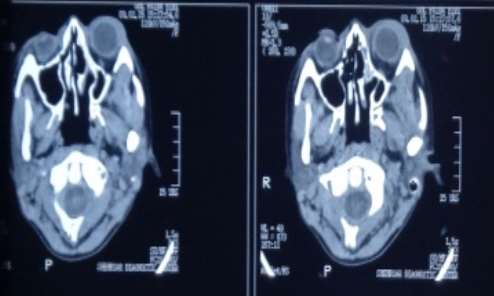 Treatment: The patient was counseled about the nature of the disease and administered Inj. Methylprednisolone 1gm x OD for 3 days followed by Tab Prednisolone 1mg/Kg body weight x OD and advised followup after 4 weeks. On followup visit, examination showed that her ptosis and cervical lymphadenopathy had improved. She was also assessed for side effects of steroid therapy. No side effects were noted. She was advised followup after 8 weeks.

Rosai-Dorfman disease (RDD), also known as sinus histiocytosis with massive lymphadenopathy (SHML), is a rare histiocytic disorder which occurs due to the over-production of non Langerhans sinus histiocytes. [1, 2] It was first described as a unique clinicopathologic entity by Rosai and Dorfman in 1969. [3] Although lymph nodes are more commonly involved, any organ may be affected. [1] Cardinal features include painless cervical lympahadenopathy, fever and elevated ESR. [4]Extranodal involvement has been reported in diverse anatomic sites, particularly the skin, orbit, and upper respiratory tract. [5, 6] Central nervous system involvement without nodal disease has also been reported. [7] Rosai-Dorfman disease though quite rare, is distributed worldwide with 80% cases occurring in children and young adults with a slight male predominance (58%) and has a general predilection for individuals with African descent. [8] The etiology of RDD is unknown, however certain viruses like Human Herpes virus 6 and Epstein-Bar virus via causing immune dysregulation have been implicated in the pathogenesis of this disease. [9, 10, 11] The diagnosis of Rosai-Dorfman disease is not easy since its presentation can mimic a number of other non-malignant as well as malignant conditions ranging from bacterial or viral infections to malignancies including leukemia and lymphoma. Biopsy of the lymph node or affected tissue is required for the diagnosis of this disease. Proliferating S100 and CD68 antigens positive histiocytes exhibiting emperipolesis i.e. phagocytosis of intact lymphocytes and other immune cells, is the classical histologic finding on biopsy in Rosai Dorfman disease.

No specific treatment protocol is established for Rosai Dorfman disease because the disease is rare and its course is mostly self limiting. [14] However, patients with severe, persistent disease or in cases where organ function is compromised steroid therapy, chemotherapy, surgical resection or radiotherapy can be instituted with varying success rates. [12, 14, 15]

Rosai-Dorfman disease shares many of its presenting features with leukemia, lymphoma, tuberculous lymphadenitis and other causes of histiocytosis, so it should be considered in the differentials of patients, especially children and young adults who present with painless cervical lymphadenopathy. It is also important for physicians to recognize that the disease can have a myriad of clinical manifestations depending upon the tissue involved, as was the case in our patient we presented in this case report having cervical lymphadenopathy with orbital involvment in whom lymphoma, leukemic deposits, orbital pseudotumor, Langerhan’s cell histiocytosis and hemangioma were also amongst the list of differentials until biopsy confirmed the diagnosis of RDD. It is essential for pathologists as well to look for the histopathologic features of this disease in biopsy specimens, since if promptly diagnosed and managed, can reduce unnecessary diagnostic workups and mismanagement due to misdiagnosis of this disease.

Written informed consent was taken from the patient and her parents for the publication of this case report and any accompanying images.