Background: Rohingya refugees are the most vulnerable group due to lack of health care system, personal hygiene, shelter, sanitation and violence. In this study the main aim to find out the health problems & health care seeking behavior of rohingya refugee peoples, to identify the socio-demographic information for such exposure group in relation to age, sex, occupation, living areas, to explore the patient’s physical, emotional, perceptions, attitudes and environmental health problems and to bring out health care seeking behavior of refugees. Methodology: This was a cross-sectional study. Total 149 samples were selected conveniently for this study from the refugee camps. Data was collected by using mixed type of questionnaire. Descriptive statistic was used for data analysis which focused through table, pie chart and bar chart. Results: The finding of the study showed that 45.6% participants had multiple problems followed by 16.8% participants had other specific problems like musculoskeletal pain, visual problems and peptic ulcer. Urinary tract infection is the leading individual health problems, among the participants 11.4% had this problem, 10.7% participants had hypertension, 6% had respiratory tract infection, 3.4% had nutrition deficiency, 4.75% had diabetes mellitus and 1.3% had sanitation & hygiene problems. Among the participants the middle age people had mostly health problems, 68.4% age range between 15-59 years. The study showed that, only 16.1% participants were satisfied with the quality of service they received, among the participants 37.6% participants said that they were need better services such as more laboratory test, radiological imaging, more medicine & more doctors. Conclusion: It is clear that refugee peoples suffered from lots of health problems, because there living condition, environmental situation not similar like an independent nations, from being their expectation there was not sufficient enough medicine & other services were available, they deserve better services.

Rohingyas are an ethnic, linguistic and religious minority group of Northern Rakhine State (NRS) of Myanmar. Myanmar government categorized them as illegal immigrants from Bangladesh and excluded them from citizenship and basic human rights (1). From 1991-1992 a mass exodus of more than 250,000 Rohingya refugees fled persecution in the Union of Myanmar and arrived in Bangladesh, living in temporary camps and completely dependent on outside support from the United Nations (UN), the Government of Bangladesh (GOB) and numerous non-governmental organizations (NGOs) (2,3,4). Globally, the total population of refugees is about 9.9 million. The general health status of refugees in various countries is reported to be poor with malnutrition being the major health problem due to lack of access to sufficient food and nutrient intakes. Other health problems among refugees include mental illnesses, intestinal parasites, hepatitis B, tuberculosis, sexually transmitted diseases, HIV/ AIDS, malaria and anemia (2, 5). Infants and young children are often the earliest and most frequent victims of violence, disease, and malnutrition which accompany population displacement and refugee outflows. Rohingyas are spending long period of time in Bangladesh as refugees “My life is over. All I want is for my children to have a chance at a better life.” Two generations of the Rohingya have said this. The vast majority of their community suffers the same neglect and lack of opportunity that their parents faced at present, there are no specific services available to refugee children with special needs or disabilities. With regards to cases of sexual exploitation of children, there have been reports and cases of refugee minors (females) being harassed, abused or raped by local villagers. A survey found that out of 508 children of under 5 years of age, 65% were anemic and therefore, chronically malnourished (4, 6, 7). Rohingya is a generic term referring to the Sunni Muslim inhabitants of Arakan, the historical name of a Myanmar border region which has a long history of isolation from the rest of the country. It is thought that the Rohingya are of mixed ancestry, tracing their origins both to outsiders (Arabs, Moors, Turks, Persians, Moguls and Pathans) and to local Bengali and Rakhine. They speak a version of Chittagonian, a regional dialect of Bengali which is also used extensively throughout south-eastern Bangladesh (8). Syrian refugees are in need of basic services such as shelter, nutrition, education, medication and health care services. Approximately 1.4 million Syrian refugees are children and the United Nations Children’s Fund has reported that these children are at risk of being a “lost generation.” Syrian refugees are enduring daily challenges to physical and mental survival. In addition to the extreme needs for physical and nutritional interventions, mental health professionals recognize the urgent need for counseling services based on widespread documented reports of refugees (9, 10). Three meals a day are served in camps, but refugees are not satisfied with the quality of what is served. There are occasional cases of food intoxication. Refugees are not allowed to cook their food in tents because of the risk of fire. Out of camps, the nutritional status of refugees is mostly bad, only limited number of them can have 3 meals a day. In general, they feed on bread and vegetables. A survey conducted at a provincial centre found, among women in the age group 15-49, iron (by 50%) and B12 vitamin deficiency (by 46%) (11). Some of the countries in the region (notably Pakistan, Bangladesh, and Nepal) are host to refugee and displaced populations from neighbouring states, a circumstance that in itself merits attention since it has the potential to cause major political unrest (12). Bangladesh is surrounded by a high HIV prevalence neighboring country at southern part, Myanmar. Teknaf is a small town in the Chittagong Division at the southern tip of Bangladesh, separated from Myanmar on the eastern side by the river Naf. This border area is unique for many reasons, including the history of the tens of thousands of refugees that are currently living in squalid conditions on the Bangladeshi side (13). A 19 years old refugee at Nayapara camp sayed that “I was born in Burma, but the Burmese government says I don’t belong there. I grew up in Bangladesh, but the Bangladesh government says I cannot stay here. As a Rohingya, I feel I am caught between a crocodile and a snake” (14). The population of Bangladesh is growing at approximately the rate of l.59 percent per annum the percentage of urban population is 27% while that of rural is 73%. Bangladesh’s population growth rate was among the highest in the world in the 1960s and 1970s, when the country swelled from 65 to 110 million (15).

The Rohingya refugee problem has been a longstanding issue and involves the question of an ethnic minority’s identity. The Rohingyas are an ethnic minority group in the northern Arakan (currently Rakhine) state of Myanmar. Commonly known as Muslim Arakanese, the Rohingyas trace their historical roots in the Arakan region from the eleventh century to 1962 (16). Hundreds more Rohingya have been the victims of torture, arbitrary detention, rape, and other forms of serious physical and mental harm. Whether confined to the three townships in northern Rakhine State or to one of dozens of internally displaced persons camps throughout the state, Rohingya have been deprived of freedom of movement and access to food, clean drinking water, sanitation, medical care, work opportunities, and education (17). There is no domestic law in Bangladesh to regulate the administration of refugee affairs or to guarantee refugee rights. New refugees have difficulties accessing health care, their health problems may worsen with time.5 Social isolation and disconnection have been shown to contribute to premature death among members of isolated communities (18).

In refugee camps medical services are mostly crippled, there is no examination and with the exception of some community health centers (RHU) there is no pregnant women and infant monitoring either, since family planning services for refugees are not available, there are unwanted births and increase in infant mortality, women additionally face risks of gender discrimination, sexual violence, early marriage and miscarriage and birth complications (19). The government of Bangladesh welcomed the Rohingyas and made substantial efforts to accommodate them but the GOB had clearly maintained from the beginning that asylum for the refugees was temporary and encouraged their immediate return, of the original 20 refugee camps that were constructed in 1992 in south -western Bangladesh, among them only two are remain near Nayapara refugee camp at Teknaf and Kutupalong refugee camp near Ukhia, giving shelter to 21,621 refugees, Kutupalong camp officially houses 8,216 refugees and Nayapara 13,405 as of December 2001(20).

The study was conducted at the refugee camp in Cox’s Bazar in Bangladesh.

A research proposal was submitted to the public health department of ASA University for approval and the proposal was approved by the faculty members and gave permission initially from the supervisor of the research project and from the academic coordinator before conducting the study. The necessary information has been approved by the ethical committee of public health department and was permitted to do this research. Also the necessary permission was taken from the Camp In charge (CIC), health coordinator & medical team leader of the refugee health unit (RHU). The participants were explained about the purpose and goal of the study before collecting data from the participants. Pseudonyms were used in the notes, transcripts and throughout the study. It was ensured to the participants that the entire field notes, transcripts and all the necessary information was kept in a locker to maintain confidentiality and all information was destroyed after completion of the study. The participants were also assured that their comments will not affect them about any bad thing.

Table 1: Distribution of demographic variables among the respondents (n=149) 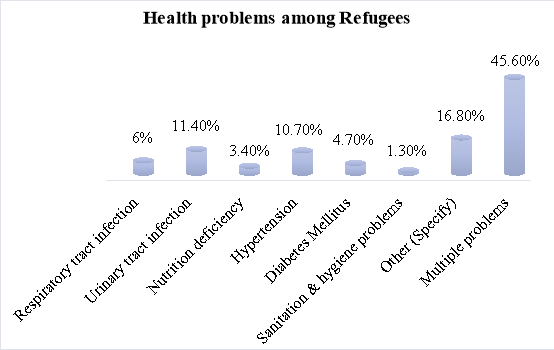 Table 3: Health care services that meet the demands and the reason for not fulfill the demands (n=149)

Figure – 2: Expectation among the participants (n=149) 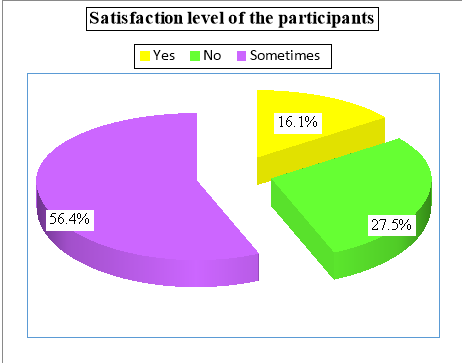 The result of this study showed that 45.6% participants were had multiple problems followed by 16.8% participants had other specific problems like musculoskeletal pain, visual problems and peptic ulcer. Urinary tract infection is the leading individual health problems, among the participants 11.4% had this problem, 10.7% participants had hypertension, 6% had respiratory tract infection, 3.4% had nutrition deficiency, 4.75% had diabetes mellitus and 1.3% had sanitation & hygiene problems during the course of the study and also in this study it was found that among the participants the mean age of the participants was 45.52 (Â±19.28) years. The range is 100 with minimum age 02 years and maximum 102 years. Among the participants the higher numbers of the participants were at the age of 35 years 8.7%. The numbers of â‰¤ 18 years were 10.1%, â‰¤60 years were 68.4% and â‰¥60 were 21.5%, the middle age people had mostly health problems. Ã-nen C et al stated that health problems among refugees were frequently seen mostly at the early childhood & in adult aged problems, a community based study was carried out by Turkish medical association stated that 25.0%Â  children had sleeping disorder at the of below 18 years & 24.0% have adult persons with the same problems (22).

From the above discussion it can be said that Rohingya refugees are not having rights to live as human being. Considering the importance of nationality crisis of the Rohingya and problems associated with these following steps can be taken: Supplies of adequate Medicine, Increase Doctors’ and Nurse, Modernized treatment, Increase Childcare hospital, Decrease pollution, Mass awareness of life threatening disease.

Conflict of Interest: None