It was shown that the anticonvulsive action of ezogabine is a consequence of its ability to open the KCNQ (Kv7)-type potassium channels that are composed of four subunits and are found in the membranes of neurons [2]. The importance of this type of potassium channels in the development of epilepsy was understood only after its dysfunction was linked to benign familial neonatal convulsions [3,4]. Ezogabine binds to all subtypes of the KCNQ potassium channels, including the KCNQ2-5- subtypes that are expressed in brain tissue. The especially heteromeric KCNQ2/3and KCNQ3/5 potassium channels are highly expressed in the central nervous system and more important in the control of neuronal excitability than other types because they mediate M currents [5,6]. Ezogabine is the only anticonvulsant that has a mechanism of action that involves opening potassium channels. This fact was the initial rationale for the drug’s development, as researchers sought to produce a new drug that would be effective in patients with drug therapy-resistant epilepsy. Ezogabine is the first antiepileptic drug with this mechanism of action and was developed to fill this gap and help with the treatment of drug-resistant patients. Finally, clinical trials documented the effectiveness of ezogabine as adjuvant therapy for the reduction of partial-onset seizure frequency, and it received marketing authorization in 2011 in both the United States and Europe [17] 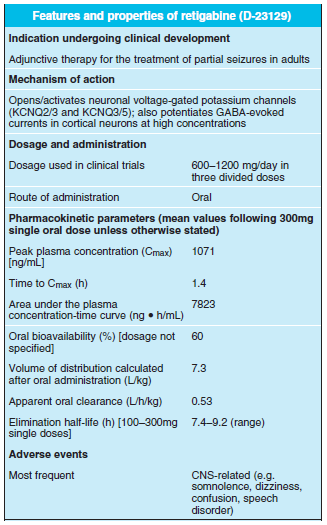 The mechanism of action of ezogabine was investigated using the electrophysiological measurements of ionic currents in Chinese hamster ovary (CHO) cells (transfected with cDNA encoding humanM1 muscarinic receptors,KCNQand CD8cDNAs) and rat ganglion cells, using the amphotericin-B perforatedpatch technique [22]. The effects of ezogabine were tested on ionic currents from both heteromeric KCNQ2/3 and homomeric KCNQ1, KCNQ2, KCNQ3 and KCNQ4 potassium channels. The potassium currents were enhanced by ezogabine through all types of channels, except KCNQ1. The effects of ezogabine were also tested in another study on HEK293 cells stably transfected with KCNQ5 channels [23]; it was shown that ezogabine concentration-dependently also enhances the potassium current through this type of channel. After binding for the KCNQ channel, ezogabine decreases the membrane potential threshold for activation of the channel (makes it more negative, i.e., shifts it toward the hyperpolarizing end) and increases the probability of maximum opening of the KCNQ channel [22,23]. All of these effects make neurons less prone to depolarization and activation. 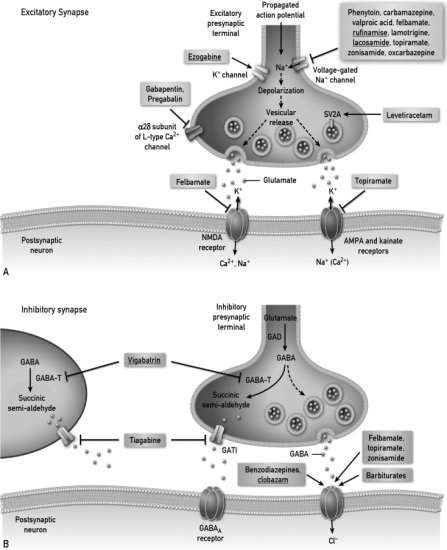 The absolute bioavailability of orally-administered RTG is ~ 60% [34]. Absorption is rapid and Cmax is typically reached 30 — 120 min after a single oral dose [35-38]. Cmax is moderately increased when RTG is taken with a high-fat meal, while the area under the plasma concentration-time curve (AUC) remains unchanged [39]. RTG is rapidly eliminated following first-order kinetics, with a terminal half-life of approximately 7.5 h; the clearance is 0.58 — 0.76 l·h-1·kg-1 [35-37]. Young women may reach 30% higher Cmax values than men after accounting for body weight, but weight adjusted clearance is similar [36]. RTG has a large volume of distribution (8.7 l·kg-1) and a plasma protein binding of about 80% [35,39]. In healthy volunteers, RTG pharmacokinetics is linearly dose-proportional for doses of 50 — 350 μg BID and not affected by multiple administrations indicating that RTG does not influence its own metabolism [35]. In epilepsy patients, RTG dose linearity was demonstrated over the therapeutic dose range of 200 — 400 mg t.i.d. [35,40]. RTG is not metabolized by cytochrome P450 (CYP) enzymes [41,42]. Rather, it is extensively metabolized by N-glucuronidation, leading to formation of two major N-glucuronides, and to a smaller extent by N-acetylation, leading to formation of the N-acetyl metabolite of retigabine (NAMR, formerly AWD21-360), which also undergoes glucuronidation [41,42]. In vitro assays using recombinant human UDPglucuronosyltransferases (UGTs) identified UGT1A1, 1A9, 1A4, and 1A3 as the principal enzymes catalyzing RTG glucuronidation [43,44]. In subjects with reduced UGT1A1 metabolic capacity (Gilbert’s syndrome), RTG pharmacokinetics is unchanged and N-acetylation partially compensates for reduced glucuronidation, in addition to compensation by other UGT1A isoforms [45]. Other UGT1 and UGT2 family members also appear to be involved, because complete loss of UGT1A metabolic capacity (Crigler-Najjar type II) did not completely abolish RTG glucuronidation in vitro [44]. Individuals with genetic polymorphisms in the N-acetyltransferase 2 (NAT2) gene leading to a “slow acetylation” phenotype had a lower total exposure to NAMR than rapid acetylators [45]. Safety and tolerability of RTG treatment is apparently not altered in subjects with Gilbert’s syndrome or slow acetylation polymorphisms [45]. RTG and its metabolites are primarily excreted by the kidney [42,45]. A 30% slower RTG clearance in elderly subjects vs. young subjects is consistent with the known decline of renal function with age [36]. Systemic RTG clearance can be reduced by 50% in patients with moderate/severe impairment of liver function (Child-Pugh score ‡ 7) or kidney function (creatinine clearance < 50 ml·min-1) [39]. Hence, a dose adjustment is recommended.

Three Phase III clinical trials were pivotal to the eventual approval of ezogabine for use to treat seizures. The first was a study by Porter et al. during which placebo or ezogabine at daily doses of 600, 900, or 1200 mg was administered [9]. RESTORE 1 compared placebo to ezogabine 1200 mg/day, and RESTORE 2 compared subjects taking 600 or 900 mg of ezogabine daily with those taking placebo [4,10]. As would be expected and consistent with other antiepileptic agents, the most commonly observed adverse effects seen with ezogabine use are CNS-related. At least 10% of study participants in Phase III clinical trials experienced somnolence, fatigue, confusion, dizziness, tremor, abnormal thinking, vertigo, speech disorders, or amnesia [4,9,10]. Most of these adverse effects appear to be related to dose, and are typically reported to be mild or moderate in nature. As in the Phase III trials, the majority (62%) of adverse events were CNS-related. In addition, several ezogabine users experienced neuropsychiatric events including hallucinations (2%), confusion (9%), and psychosis (1%) [12]. The majority of these episodes occurred within the first two months of drug exposure in individuals with no documented history of a psychiatric disorder.