Figure 6: The sequences of RF pulse in a partial saturation recovery.

MRI images are obtained by measuring how rapidly hydrogen nuclei of different tissues return to their resting energy states after being excited by a strong magnetic field (MacDonald-Jankowski, 2006). The principles of MRI should be understood clearly to enable us produce good quality images for diagnosis.

RF pulse is commonly used in MRI for excitation, refocusing and inversion (Pang and Shen, 2007). When the RF pulse is given, the protons will gain energy and resonance will occur if the energy given equals to the precessional frequency of the protons. The amplitude and duration of RF pulse determine the magnitude of the flip angle (Hancock, 2014). 90° RF pulse is used to tilt the vector away from longitudinal magnetization, Mz and transferred completely towards transverse plane results in transverse magnetization, Mxy (Hsu and Lowe, 2006). 180° pulse is required to rephrase or refocusing the protons and it rotates Mz directly opposite to external magnetic field, Bo with the number of protons are larger in anti-parallel states (Kobzar et al., 2012).

As the RF pulse is turned off, the transverse magnetization slowly disappear while longitudinal magnetization reappeared, (Gultekin and Gore, 2005).

T1 relaxation can be defined as the time when the magnetization has returned to 63% of its original value (Lakrimi et al., 2011). T1 relaxation, also known as spin-lattice relaxation occur because as the vector from Mxy returns to Mz, they give up energy to the environment or lattice (Piechnik et al., 2013) .

T2 decay also known as spin-spin relaxation time determine the time of protons loss their phase as well as loss MR signal after RF pulse is turned off. It is also can be defined as the time taken to loss 63% of the transverse magnetization (Lakrimi et al., 2011). T2 relaxation result from loss of energy to the adjacent nuclei (Key, 2007). When the RF pulse is send in, all protons are in phase (phase coherence). However, the protons will lose it phase after RF pulse is turned off. Phase incoherent is caused by two factors which are the inhomegeneities if the external and internal magnetic field. The inhomogeneity of external magnetic field will cause additional transverse relaxation known as T2* decay (Chen et al., 2005).

FID can be defined as loss of MR signal due to T2* effects. FID decays faster with the time constant T2* because of the inhomogeneities of external magnetic field (Yoshioka et al., 2009). However, the signal can be recovered by using 180° RF pulse and the signal produced is known as spin echo signal (Chavhan et al., 2009).

TR is time interval between applications of another 90 degree pulse in a sequence (Hancock, 2014). TE is the time determines how much T2 decay is allowed to occur in the middle of a 90 degree pulse before signal is read (Fonseca, 2013).

If short TR and TE are applied, T1-weighted image (T1WI) will be produced. Anatomy of a part is good to be demonstrated by using T1WI. Tissue with short T1 recovery for example fat will appear bright on the image as it emit high signal while tissue with long T1 recovery (water) is vice versa.

If long TR and TE are used, T2-weighted image (T2WI) will be produced. TE long is needed so that differences in T2 can be manifested. Tissue with long T2 (water) will appear bright on the image while tissue with short T2 (fat) will appear dark.

5. Effect of Pathological and Contrast Media (CM) to Relaxation Time

Pathological processes in some tissue will alter the relaxation time hence produces changes in the signal intensity and contrast of the tissues in MR images (Berquist, 2012). Pathologic tissues usually have longer T1 and T2 compared to normal tissue, hence, the tissue will manifest high contrast compared to its surrounding (Yoshioka et al., 2009).

Both T1 and T2 relaxation time can be shortened by using contrast media to detect pathological tissue (Saeed and Wilson, 2012). Pathological tissue in TI image will appear bright as CM increase the signal intensity while in T2 image, CM will produces broader lines with increased intensity (Yoshioka et al., 2009). 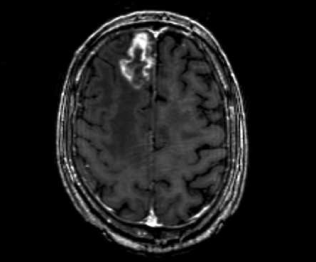 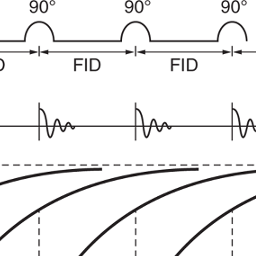 The principles of MRI should be understood clearly to obtain images that can use for diagnosis. The importance of knowing the principles also need to be applied not just in theory but also during performing MRI examination. The functions of each parameters used in MRI also should be recognized as they play vital role in producing different type of images.