Background: Leprosy or Hansen’s disease is a chronic mildly contagious granulomatous disease of tropical and subtropical regions caused by the rod shaped bacillus, Mycobacterium leprae. It affects the skin, peripheral nerves in hands and feet, mucous membrane of nose, throat and eyes. When left untreated it is capable of producing various deformities and disfigurements. Aim: To study the ocular involvement in patients with Leprosy under the parameters of age group, sex type and duration of leprosy. To study the different ocular manifestations and identify the potentially sight threatening lesions and provide early management. Methods: A prospective study of 50 cases diagnosed with Hansen’s disease were included. Detailed history and thorough clinical examination done. Potentially sight threatening lesions were managed conservatively or surgically. Results: Out of 50 cases of Leprosy, 58% had ocular involvement and majority were of the age group 21-40years. Ocular involvement was predominantly seen in Lepromatous type with 35% having ocular lesions. The most common ocular manifestation observed was superciliary madarosis(48%). Potentially sight threatening lesions accounted for 72.4% of which lagophthalmos was common. No cases of blindness seen. Conclusion: Visual impairment is preventable in Leprosy if detected early. The risk of ocular complications increases with the duration of the disease, despite being treated with systemic anti-leprosy drugs.

Leprosy or Hansen’s disease is a chronic infectious disease caused by an intracellular rod shaped acid fast bacilli Mycobacterium leprae which affects the skin, nasal mucosa, peripheral nerves and the anterior segment of the eye.1 Mycobacterium laprae was discovered by a Norwegian physician G.Armauer Hansen in the year 1874.1 The most ancient writings of ‘’SUSHRUTA SAMHITA’’ compiled in 600BC refers to leprosy as Vat Rakta or Vat Shonita and Kushtha2,3. Leprosy occurs in all ages and both sexes. Male: Female ratio is 2:14. Leprosy bacilli has a predilection for neural tissue and their target is Schwann cell. The fate and type of leprosy depends on the resistance and immunity of the affected individual5 ( Jopling, Mc Douglass 1996). There are 11million cases throughout the world and about 1/3rd have ocular manifestations.6 Prevalence of blindness due to leprosy is 4.7% of the population in India.7,8 Various studies shows ocular involvement in Leprosy patients. The frequency and types of involvement depends on the duration and form of the disease.2,9 Ocular lesions are common in lepromatous type of leprosy and presents with lepromatous nodules, conjunctivitis, keratitis, pannus, scleritis and uveitis. Lesions are rare in Tuberculoid type of leprosy and are secondary to the involvement of branches of facial nerve which presents with paralytic lagophthalmos, exposure keratitis and neurotrophic keratitis. Acute iridocyclitis and scleritis are seen in type 2 lepra reaction occurring in lepromatous leprosy.6 Blindness has been reported in 7% of patients secondary to lagophthalmos, uveitis, exposure keratitis and cataract8. Proper attention and early detection can prevent potentially sight threatening lesions.

The present study was carried out in the out patient Department. of Ophthalmology and In patient department of Dermatology at Meenakshi Medical College and Hospital, Kanchipuram from March 2012-May 2014. In this study a total of 50 patients were taken, 38 males and 12 females of the age group 20years and above . Prior to the study an informed consent form from the patients and ethical clearance was obtained from the Institutional Ethics Committee. Inclusion Criteria: All diagnosed cases of leprosy. Old and new cases, both genders and age group of 20 years and above. Exclusion Criteria: Non compliant patients, Patients with pre existing ocular disorders due to other causes than leprosy.

Type of study: A cross sectional descriptive study for a period of 14 months.

Procedure: Relevant details of both ocular and systemic history, including details of lepra reaction and clinical examination of patients was recorded on a proforma. A detailed slit lamp examination of the anterior segment of eye was done. Visual Acuity recorded with help of Snellen’s chart10. Corneal sensation was checked with a wisp of cotton. IOP was recorded with help of Schiotz tonometer10. Fundus examination with 78D and IDO done. Lab investigations like haemogram, ESR, Urine routine and RBS done. Slit skin smear and skin biopsy from the ear lobe was performed by the Dermatologist and report obtained as positive for M.leprae (Ziehl Neelsen technique)11. Patients were started on systemic anti leprosy drugs(multi drug therapy) and treatment for lepra reactions. Patients with ocular manifestations were treated accordingly to their need of Lubricant eye drops, topical antibiotic with steroid drops, eye ointments, frequent blinking exercises, physiotherapy, lid taping at night time and spectacle correction.

RESULTS: In this study of 50 patients with leprosy, majority belonged to the age group of 21-40years (46%). 76% were males and 24% were females. Out of 50 cases, 30% were tuberculoid type, 22% lepromatous type and 48% borderline type. Out of 50 cases 58% had ocular involvement in which 45% were within the age group 21-40years. Out of the 29 cases with ocular involvement 72% were males. 35%with ocular manifestations were of lepromatous type of leprosy. 41.4% gave a positive history of lepra reaction. The ocular involvement was directly proportional to the duration of leprosy. 55% had leprosy more than 5 years. Superciliary madarosis (48%) was the most common ocular manifestation. The potentially sight threatening lesions were Lagophthalmos(35%), seen more in lepromatous type(14%). 28% had corneal hypoesthesia, 21% with exposure keratitis, 17% had corneal opacity, anterior uveitis and conjunctivitis each accounted for 7%. It was interesting to note that 60% of patients with lagophthalmos had exposure keratitis. 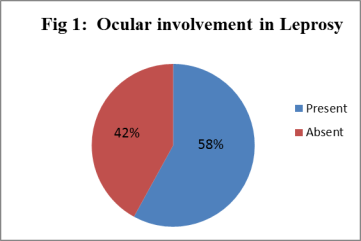 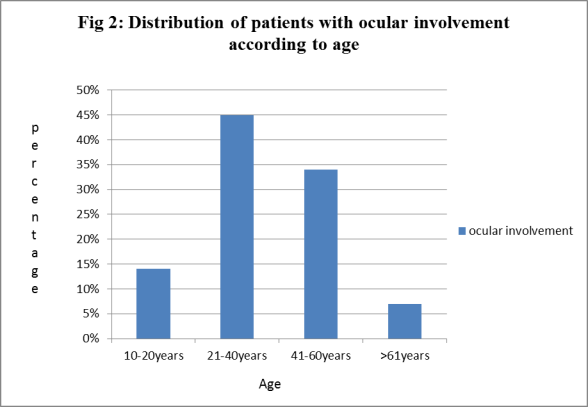 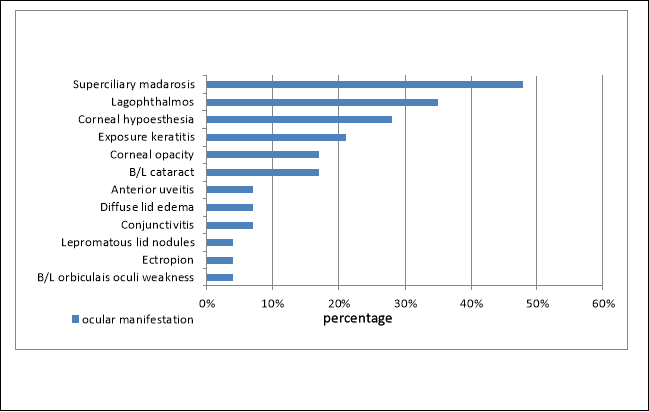 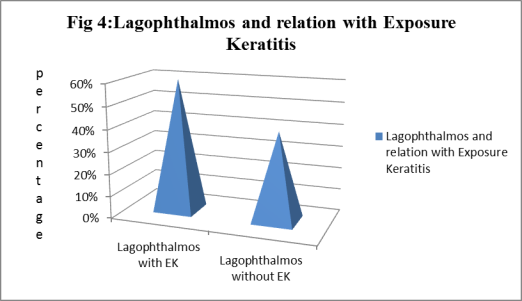 DISCUSSION: The involvement of eyes in leprosy is due to infiltration of the tissues by the bacilli and damage to the nerves12. In this study 58% of the patients had ocular involvement. This can be compared to other studies of Wani.S.et al 2005 which showed 69% of ocular involvement, Gnanadoss A S et al 1986 showed 59.2% 13. Studies conducted by Shields shows 33% of potentially sight threatening lesions which included keratitis, iritis, lagophthalmos and secondary glaucoma14. In our study the potentially sight threatening lesions were lagophthalmos, exposure keratitis, uveitis, corneal hypoesthesia and corneal opacity which accounted nearly for 72.4%. Majority of the patients in our study were of the age group 21-40 years and male predominance was seen in both for, affected eyes with leprosy(76%) and ocular involvement (72%). This can be compared with the study by Wani.S et al (82.6%)12 which also showed predominance for men. This study further shows that ocular manifestation were seen more in lepromatous leprosy (75.36%) followed by borderline(14.49%) and tuberculoid leprosy(10.14%)12. In our study conducted, ocular involvement was 35% in lepramotous, 31% in borderline and 17% in tuberculoid type. The reason being that M.leprea has a favourable environment in the anterior segment of the eye and the bacilli is found more in lepromatous type of leprosy. Madarosis was the commonest ocular manifestation in our study which was about 48% when compared with Shield’s 1974(54%)14 and Acharaya B P (59.2%)15 and Wani.S. et al (72.46%)12. Lagophthalmos accounts for 35% in our study when compared to Wani.S et al (28.98%)12 , Acharaya B P (34.3%)15 , Lamba et al 1983 (13%)16 , Shields 1974 (29%)14 and Weerekon 1972 (27%)17. Lagophthalmos is commonly associated with lepra reaction in the face and damage to the facial nerve and also depends in patients with lepromatous leprosy(14%) which is similar to the observation by Wani.S et al (18.84%)12. In this study corneal involvement was seen in 66% of the patients, corneal hypoesthesia 28%, exposure keratitis 21% and corneal opacity in 17%. In the study conducted by Wani.S et al corneal involvement (36.23%)12 . Radhakrishnan N et al observed that the major cause of blindness in leprosy was exposure keratitis due to lagophthalmos(23%) and leucoma (25%)18. Cataractous changes in lens was seen in 17% of the patients, but it was not a complication due to leprosy or MDT but merely due to senile lens changes in the older age group of the patients in our study. This is also supported by the study from Gnanadoss A S et al13. Iris pearls seen in anterior uveitis are said to be the pathognomic of leprosy19,20. But in our study uveitis was observed only in 7% of the patients when compared to Wani S et al12 which showed 31.88%. This probably is due to the small sample size of our study and also the duration of leprosy not being more than 10 years for all patients ,because uveitis is seen mostly in chronic cases of leprosy. This is supported by various studies like Lamba 1983 16(14%), Hornblass 197321 (16%) and Gnanadoss A S et al 198613 (5.6%). In this study all patients with ocular manifestations were either treated formerly(58.6%) or presently (41.4%) with systemic anti leprosy drugs. Courtright et al suggested that ocular pathology will still occur in MDT treated leprosy patients22. Thus treatment does not prevent the occurrence of ocular lesions12. Moreover once the patient is on treatment the ocular reaction is seen more in the first 6-12 months due to reactions23. The progressive leprosy related lesions are the result of chronic nerve damage.

CONCLUSION: The risk of ocular lesions increases with the duration of disease, lepra reaction and facial patches in this reaction. Screening of all patients affected with leprosy can help in identifying the potentially sight threatening lesions which can be treated earlier. Visual impairment if detected early is preventable. The Multi Drug therapy for leprosy has improved the outcome of the affected with leprosy but does not retard the development of ocular complication.

LIMITATIONS: Owing to the small sample size in this study many other ocular manifestations could not be assessed. A relationship between uveitis, Complicated cataract and leprosy can be suggested if the patients presents with a longer duration of leprosy more than 10 years, as in this study we had only 4 patients in that category.

It is with the sense of accomplishment and deep gratitude that we dedicate the work to all those who have been instrumental in its completion.

We are greatly thankful to the RMO, Meenakshi Medical College Hospital and Research Institute, Kanchipuram. To our Associate Professors, Assistant Professors, Colleagues and Staffs of the Department of Ophthalmology and Dermatology for their timely help, support and constant guidance in our work.

10. “Orthoptists and Prescribing in NSW, VIC and SA”. The Royal Australian and New Zealand College of Ophthalmologists. Retrieved 29 July 2010.