Nowadays, Oil & GAS industry is having a lot on challenges because of the complexity of this industry and the interaction with the other aspects such as the earth & cosmic properties. However, one of the most important aspect for the oil & gas is Naturally Occurring Radioactive Material (NORM). These materials are having a negative effect on the humane body and the environment which required to have a strict procedure to control such materials in production of the oil until handing these the concentered NORMs during the transportation from one point to another.

In this report, I will be covering the definition of the NORMs and how it can be detected on the process side with a real measurement example. Also, if these materials are present, how can we mitigate these effect of exposure to the radioactive materials? According of the ADNCO Code of practice (COPV2-09).

NORMs are covering all the naturally occurring radionuclides and presenting at different concentrations in the earth crust. Moreover, these materials can be enhanced in the concentration due to the process accumulation which is associated with the recovery of oil and gas such as separators & reflux pumps. This enhancement process of NORMs called TENORM (Technologically-Enhanced Naturally Occurring Radioactive Materials). The sludge, pipe scales and drilling mud are an examples of materials which can contained the elevated levels of NORMs.

There are two main types of NORM contamination at Oil & GAS industry which are Radium and Radon (Rn-222) contaminations. The Radium is existing in water and low specific activity scale. Moreover, the radon is usually found on natural gas production wells.

Furthermore, there are two systems of measuring of radioactivity and radiation levels, which are international system (SI) and the traditional US unites with its conversion factors between them as shown in the below table:

NORM can be divided in three types of radiation as shown below:

On the other hand, the health effect of these NORMs are vary with four factors which are:

The exposure to the NORM is not comparable with the man-made sources such as the X-Ray. A chronic exposure to these NORM without using any PPE (personal protection equipment) which is adequate to the existing radiation increases the likelihood of gaining cancer. During oil & gas processing stage, the TENORM will be accumulated on two different forms as shown below:

Radium, one of the naturally occurring nuclides in the uranium decay series co-precipitates with strontium, barium or calcium as sulphates or carbonates and deposit on the internal surfaces of the oil and gas facilities. The formation of the scales eventually effects the integrity of the equipment, vessels and pipelines and consequentially reduces the capacity of the process facility.

Radionuclides, mainly radium are found in sludge, produced sand and produced water. Other nuclides such as lead 210 and polonium 210 can also be found in pipeline scrapings and the sludge accumulation in lower level of the tank of gas & oil separators, dehydration vessels and pipeline scrapings.

Figure: 2 illustrate the NORM exposure routes to the human body as shown below. 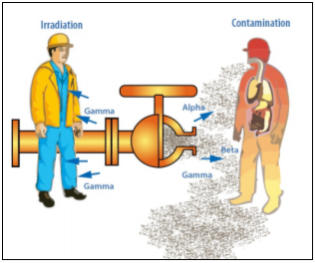 Referring to ADNOC COPV2-09, the NORM management process cycle has been developed and illustrated as shown below chart: 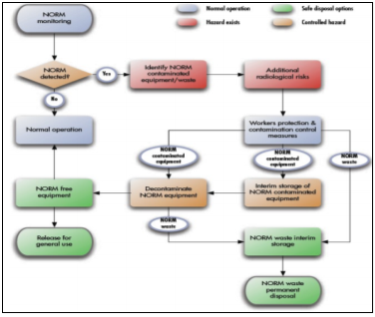 The NORM management process cycle is giving a workflow how can we handle these materials if it is detected on the Oil & Gas process, which basically is having an actions and controls to eliminate the effect of these radioactive to the workers, public and the environment and make it As Low As Reasonably Achievable (ALARA). Thus, before implementing the management process cycle, NORM Management Strategy was establish to make the process cycle more effective and it is consist of five keys area as follow : 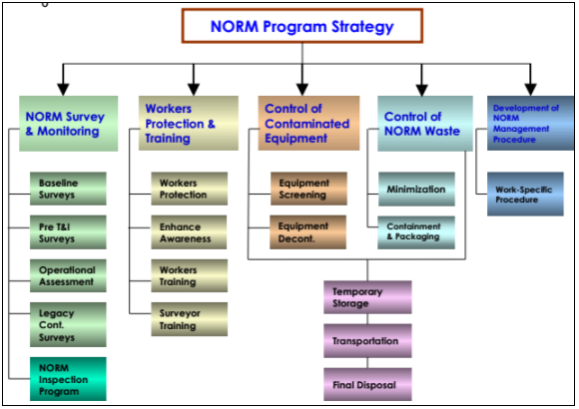 For any newly finished oil / gas producer well, the initial (baseline) survey shall be conducted for NORM and if the result is positive more controls and actions shall be implemented through the NORM management process cycle. Radiation Protection officer (RPO) shall be certified and having adequate competency to locate & assess the radioactive on-site.

The normal duties of workers don’t include exposure to NORM radiation. They are considered as members of the public. The ADNOC limit on effective dose received by any employee, shall be not exceeding the 50mSv in any single year during with a 100mSv over the 5 years. Otherwise, the worker with more dose than 50mSv/year shall be consider as classified radiation workers. Those workers shall have a periodic medical surveillance in order to insure the fitness and health.

Moreover, the location/equipment can be classified in to three zones depending on the dosing values as shown below table:

Hence, the NORM measurement can done through two types, either by field or laboratory measurements and both of have its own requirements and conditions. However, in this report, the field measurement will be carrying for a gamma radiation in different locations. So, the instrument was used for this measurement is the 900 series mini monitor probe type 44A in counts per seconds-cps. This meter is a very sensitive gamma rays and it is detecting the radiation as a number not level concentration. The methodology of the survey as presented below steps: 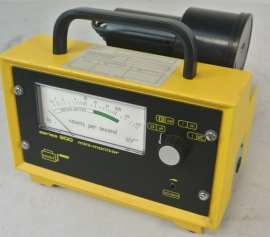 The process of measuring the NORM was done by a expert third party (M/s Aberdeen Radiation Protection Services) in different locations at upstream of the oil and gas well producer, but the below table is showing only the risky data which required to have a more analysis on the amount of the gamma radiation emitted at these points.

All the reading are in counts per second and most of them are above 100 counts which is reflecting that it is required to have more analysis by using external dose rate meter to know the exact concentration and exposure dose to surrounding which can be emitted. Moreover, the laboratory measurement shall be one of the option to have more details by using the radiometric analysis device.

To sum up, the naturally occurring radioactive material are associated with oil and gas industry which shall be controlled in order to reduce the negative effect on the workers, public & environment. The process of evaluating the NORM (specially the baseline) is very critical and it can be led to catastrophe condition if the outcomes are not reflecting the actual situations. This finding of Gamma rays in our case are indicating there is an industrial hygiene issue to the worker which required to have more control on the PPE and exposure duration. However, these reading are located mostly on oil separation side (upstream), however, the downstream, gas processing industry is very important point to be assessed which was missed during the third party assessment at upstream feed. In order to reduce the amount of exposure, the worker shall be following the ADNOC COPV2-09 as a guidelines such as monitoring, workers protection requirements and transport of NORM contaminated equipment.

Moreover, the Gamma elements will be moving from the upstream to downstream which will be reaching the gas processing units. So, it is recommended to have regular inspection for the radioactive materials specially the glycol unit will observed most of the moisture on the process which can be containing the radiation elements.