The treatment of Achilles tendon lesions is still controversial. Even the usual Bunnell technique of suture is appreciated to be a good ones, it is steel associated with a low rate of reruptures. In order to improve the suture strength, we modified the original Bunnell suture by using two sutures in Bunnell manner, one starting from the superior and the other from the inferior tendon stumps. The manner of fixing the knots is in double points and realizes a superior tight fitting than the usual Bunnell suture. We used this suture in four cases of accidental section and in 11 cases of acute rupture, with no reruptures. Based on our own experience, we consider this modification of Bunnell sutures increases the strength of the sutured tendon and generates a low rate of reruptures.

The Achilles tendon is the largest and the most frequently injured tendon of the human body (1, 2, 3). In cases with accidental section, the only surgical treatment is accepted.

Treatment protocols for patients with acute Achilles tendon rupture include surgical and nonsurgical management, but they are constantly being modified (4, 5). The rerupture following acute lesion is the most frequent major complication and it is higher in nonsurgical treatment than in surgical one (6). In surgery the rates is lower, but it is still up to 3% (7, 5). Various surgical methods have been described including open, minimally invasive and percutaneous repair (8, 9).

In chronic ruptures of Achilles tendon, most authors consider the surgical treatment to be the only satisfactory one (12, 13, 14). In chronic ruptures, we never used any type of suture but the angmentation only.

Each surgeon chooses one surgical techniques because considers it to be associated with a low rate of complication. Base on our experience, we consider, in the acute Achilles tendon ruptures, the surgical treatment has some advantages. We present our experience with Bunnell modified suture surgical of Achilles tendon lesions and discus the used techniques in accidental sections and acute ruptures. We believe our modified Bunnell suture to be associated with a lower level of rerupteres than the original one.

In cases with accidental sections the diagnoses was established by clinical examination, and in all cases an immediate surgical repair were performed. It was three male and one female, between 37 and 42 years old. In all of them an end-to-end modified Bunnell suture was done.

In acute ruptures cases the diagnoses was based on history and physical examination. In some cases, an ultrasound or MRI examination was added. All the patients accepted for surgery had to present a palpable depression on the tendon, a positive Thompson test and disability to stand on their tiptoes on the injured side. The duration of ruptures from injury to surgery was from a couple of days to five weeks. The patients group comprised 11 men and two women ranging in age from 24 to 59 years. The majority of the ruptures were at about 4 to 6 cm proximal to the calcaneal insertion. All the patients were treated by the same technique, a modified Bunnell suture.

With the patient under anesthesia, tourniquet control and in prone position, the surgery started by a posteromedial incision from 4 cm. up to 4 cm. down to the rupture site. The incision is without dissection, sharply through the skin, subcutaneous tissue and fibrous tendon sheath. Then, the synovial sheath is carefully dissected and then longitudinally incised on both side of tendon section or rupture, and protected in order to be easy sutured at the end of tendon repair. The ragged ends of the ruptured tendon are limited excised and with the ankle plantarflexed up to 35° a direct modified Bunnell suture is done.

Fig. 2 Modified centrally running Bunnell suture with two distal knots fixation. This initial variant was not used in cases included in this study.

Fig. 3 Modified Bunnell with two laterally sutures. This is our technique which was used in all cases of the study. 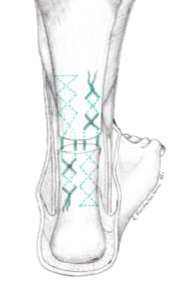 In our technique, instead of one centrally running suture as in original Bunnell (Fig. 1), two laterally sutures on both sides of each stamp, were used (Fig. 3 and Fig. 4). One of the sutures starts from the superior and the other from the inferior tendon stumps. Each of the two sutures is passed through the level of section or rupture and then is fixed in the opposite tendon stump. This fixation is by four knots, two in the end of the proximal stump and two in the end of the distal stump in the manner described in fig. 2. In some cases, especially in cases of tendon sections, the tendon repairing was supplemented with interrupted circumferential sutures. After tendon repairing, we pay special attention to the synovial sheath suture. It is carefully sutured to cover as long as possible the repaired tendon.

After cast removal the patient is advised to wear shoe with high heel for another three month and increased activity and physical therapy are begun.

In the cases of section the average follow-up was 6 months and ll of them have had the evolutions with no major or minor complications.

In the cases of acute ruptures the average follow-up was 12 months. In all cases, no surgery related major complications, such as tendon rerupture or necroses, sural nerve injury, skin necrosis, wound infection, or deep infection. As minor complications, there were two tendon contracture and one superficial wound infection which were conservatively treated. In all patients with minor complications, no supplementary surgical treatment was done. None of them had tendon adhesion to the skin and the skin over the tendon was movable. Two patients had cosmetic complaints concerning the scar but without affecting the ankle function.

All patients were able to stand on their tiptoes and single affected side leg hopping was possible one year postoperatively. Active range of motion was found to be reduced with limited dorsiflexion in two cases with acute rupture, and the difference was less than 10°. At the last follow-up, there had been no cases of rerupture and the subjective satisfaction was excellent or good in all the patients.

In accidental section of Achilles tendon, an end-to-end tendon suture is usually done but simple interrupted suture are not sufficient. In these cases, we consider Bunnell suture to be the method of choice. Initially, we modified centrally running Bunnell suture in the manner depicted in fig. 2. This initial variant was not used in cases included in this study. Then, in order to improve the suture strength we used two running suture of the original Bunnell, in the manner depicted in fig. 2. This surgical variant was used in all patients of this study.

Although, in acute cases, percutaneous procedure increases in popularity, surgery is commonly performed as an open technique (16). The most usual techniques for primary open repair are Bunnel, Kessler and Krackow sutures (6, 19). Although there were reported reruptures after a Bunnell suture, we consider this method and used a modified Bunnell one in the majority of our patients with direct primary sutures. This modified Bunnell is a preference of the main author (IS).

The results of this study suggest the modified Bunnell suture in our manner has some advantages. In Achilles tendon section or acute ruptures, it is associated with good functional results and a low rate of complications. We consider this type of suture increases the strength of the sutured tendon and generate a low rate of reruptures.