The Tāmaki Makaurau region stretches from the South Kaipara in the north to the southern reaches of the Manukau Harbour and covers more than 5,600 square kilometres. It is the smallest of the Te Puni Kākiri regions but contains the largest population of Māori.

Is a disease whereby, cells grow uncontrollably in the lung tissue usually beginning in the lining of the bronchi or bronchioles (small tubes in the lungs, through which air passes while breathing). As these tumours enlarge they can block off the bronchi and restrict the airflow into the lung. They commonly spread into the local lymph nodes and occasionally the chest wall. This reduces the airways capacity leading to shortness of breath and coughing. The growth may lead to metastasis, which is when the cancer spreads to other areas of the body.

Smoking is the most common cause of lung cancer and is attributed to approximately 85% of cases. Lung cancer in non-smokers is attributed to a combination of genetic factors, radon gas, asbestos and air pollution, including second-hand smoke. (Cancer NZ)

Is cancer of the cervix, which is the lower part of the uterus or womb.

Cervical cancer develops slowly over time, usually taking many years, when abnormal cells grow on the cervix. These abnormal cells are caused by infection with high-risk types of HPV.

Abnormalities in the cells of the cervix can be detected by cervical screening and removed. Each year there are around 25,000 abnormal smear test results among New Zealand women.

The most important risk factor for cervical cancer is persistent HPV infection.

Other factors may contribute, including:

For ovarian and endometrial (lining of the uterus) cancers the causes are not well understood. However it is known that;

• Women who have not had children

• Women who are overweight

May have an increased risk for these cancers a cause of some cervical, vulval and vaginal cancers is a virus called human papilloma virus (HPV). This is a common sexually transmitted virus. Most women are infected with it at some point in their lives. For most women it will never cause any problems. However, for a few women it causes cell changes that can lead to cancer. (Gynaecological Cancers Information for all Women, 2012)

Bowel cancer is named according to where it is found: for example, cancer of the colon, cancer of the rectum or colorectal cancer. This cancer occurs when the cells in some part of the bowel grow abnormally and form a lump or tumour. Most cancers are in the large bowel. Cancer in the small bowel is less common.

How common is bowel cancer?

The latest provisional information available from the New Zealand Cancer Registry1 recorded 2,759 new cases of colorectal cancer in 2008. It is one of the most common cancers among both men and women in New Zealand. It may occur at any age, although 90 percent of cases are found in people over the age of 50.

There are different risk factors in developing Bowel Cancer: 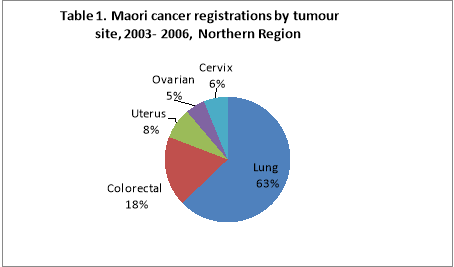 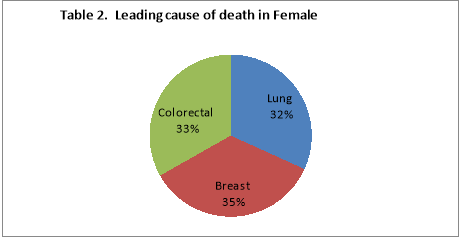 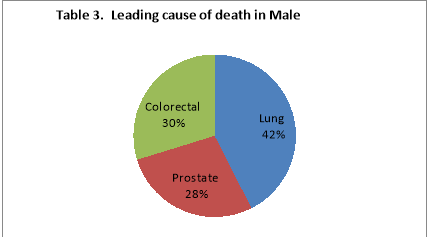 The table above shows the cancer registration by tumour sites for Maori clients in year 2003-2006, Northern Region. There is a high significance rate which is 63% in Lung Cancer for Maori people. This is mainly because of the exposure to cigarette smoking and second hand smoke that the Maori people are experiencing.

The next three types of cancer are under the umbrella of gynaecological cancer for women. These three has different contributing risk factors which are obesity, improper diet, number of pregnancy and genetics. It can be prevented by undergoing screening and regular check-up with their OB-Gyne. Most of the Maori women are getting pregnant with their first child at an early age which causes them to bear more children through their lifetime that may cause one of these cancers.

In the early years, Maori people don’t have the enough knowledge with Cancer and they seek help with their local village doctor and instructed to take herbal medicines to relieve whatever symptoms they were experiencing that moment. And later on will be deceased due to different complications without knowing the real cause.

The present day health priority for Maori is early screening for cancers. For female Maoris, they can undergo mammography for breast cancer screening, and Pap smear for cervical cancer screening. For male Maoris, they can undergo Digital Rectal Examination to check if there are any tenderness and lumps in their prostate. Early prevention is important for there are many treatments that can be used like surgical removal of lumps or undergoing radiotherapy and chemotherapy treatments. The chance of survival is high when the cancer is diagnosed at the early stage.

Proper health education and having Maori representatives in public health care services is important for the Maori, for they will feel that they are safe and secured if they will speak to their co-Maori people in regards with their health concerns. The partnership of the Maori with The Crown will help the Maori people to avail the different health services offered by The Ministry of Health with respect to their culture and beliefs.