A retrospective study was conducted on 33 patients (15 females and 18 males), with mean age of 22 years (age range of 19 – 28 years), who were operated for mandibular prognathism by BSSO at the department of oral and maxillofacial surgery, Mar Baselios Dental College, Kothamangalam. The patients were selected according to above mentioned inclution and exclusion criterias. The surgical procedure was done by one chief operating surgeon. No maxillomandibular fixation was used postoperatively. Pre and postsurgical orthodontics was carried out at the department of orthodontics and dentofacial orthopaedics, Mar Baselios Dental College, kothamangalam.

A standardised lateral skull radiograph with adequate quality and exposure was taken pre operatively and after 6 months of follow up in natural head position [Frankfurt’s horizontal plane parallel to the floor, the tongue in relaxed position and the mandible in centric occlusion] with exposure values of 80 KVp, 10 mA, and 1.30 seconds.

All the patients had undergone BSSO for correction of horizontal mandibular excess [mandibular prognathism]. All surgeries were carried out by the same surgeon.

During the positioning of the patient before surgery the head end of the table is tilted by about 15°. Hypotensive anaesthesia technique was used. Both these are intended to reduce intra operative bleeding.

At the beginning of the procedure 2% lignocaine hydrochloride with 1: 2,00,000 epinephrine is infiltrated into the buccal vestibule upto the midramus region of the mandible on both sides.

The incision is placed over the anterior aspect of the ramus extending from the midramus region running down over the external oblique ridge upto the first molar region where it curves down to the buccal vestibule. Retracting the soft tissues buccally, before placing the incision prevents the initial exposure of the buccal fat pad. A sharp dissection is done in the ramus upto the periosteum.

Periosteal dissection is started on the lateral aspect of the mandibular body from anterior ramus upto the second molar region extending to the inferior border. On the lateral aspect of the ramus dissection may be minimal only to achieve proper access and visibility. Medial dissection is done subperiosteally with a Howarth’s periosteal elevator and should be above the level of lingula and mandibular foramen which usually coincides with the deepest concavity of the anterior border of ramus. Later a channel retractor is inserted for medial retraction so as to protect the mandibular neurovascular bundle.

Osteotomy is done with surgical micromotor and burs. Its initiated on the cortical bone of the medial side of ramus above the lingula extending from behind the mandibular foramen [half to two-third of the anteroposterior dimension of the ramus] running down onto the superior aspect of the body of the mandible and then extended to the external oblique ridge over the lateral aspect of the mandibular body upto the 1st molar region. 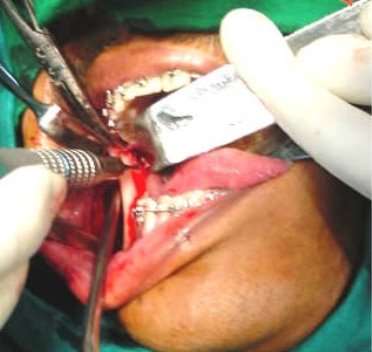 Extending the cut towards the 1st molar region gives better accessibility for intraoral plating. The depth of the cut should be minimal only to reach the cancellous bone. The vertical cut is extended to include the inferior border so that the direction of the split is controlled. During the vertical cut a channel retractor is placed on the lateral aspect so as to protect the buccal soft tissues and facial artery. 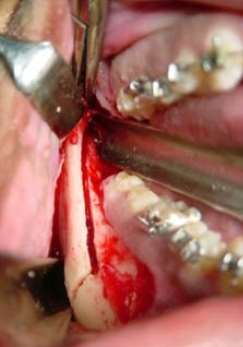 Following the osteotomy, a small spatula osteotome is malleted into the site beginning from the medial cut, down the ramus, over the body upto the vertical cut. The spatula osteotome is directed laterally beneath the cortical plate so that the neurovascular bundle is protected. Later larger osteotomes are used and finally the fragments are prised apart using a Smith spreader. 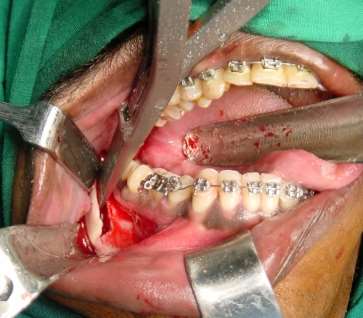 As the fragments are prised the neurovascular bundle is visualized and care is taken to maintain it to the medial tooth bearing fragment. If the neurovascular bundle is found to be attached to the proximal condylar segment a small periosteal elevator is used to free the bundle and bring it to the medial fragment. Once this is done osteotomes in a wedging fashion or the Smith spreader is used vigourously until the spilt of the fragments are completed. The osteotomy is repeated on the opposite side of the mandible. When the mandible is setback, release of the medial pterygoid and masseter muscle is stripped, if needed to prevent the displacement of the condylar segment posteriorly. 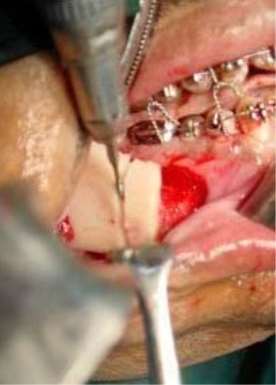 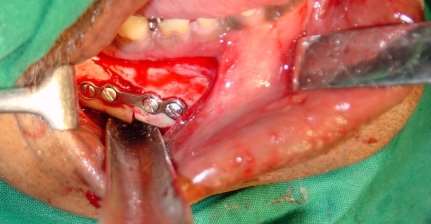 Wounds are irrigated and bleeding is controlled. Wounds are closed with 3-0 vicryl sutures in layers.