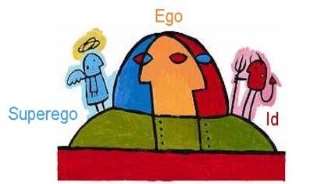 The topic of discussion today was Understanding Our Own Defences. Since the lesson, I have been researching this subject and learned that it was Sigmund Freud (1856 – 1939) who first began to write about the mechanisms our brain uses to stop us from feeling anxiety, guilt or hurt. Freud believed that our psyche, which is not our physical brain, more our personality and the way we behave, is split into three. He called these parts the Id, the Ego and the Super Ego. He thought that the id was submerged out of sight in our subconscious, whereas the ego and super ego were in our consciousness. The id is the primitive and instinctive part of our personality that contains sexual and aggressive drives and hidden memories, the super-ego operates as a moral conscience, and the ego is the realistic part that mediates between the desires of the id and the super-ego. According to the theory, we are born with only the id part of our personality, and we go on to develop the ego and super ego at around 3 to 5 years of age. The Id, however, remains a personality trait throughout our life, one of its traits is that it demands immediate attention. Freud stated that the ego is ‘That part of the id which has been modified by the direct influence of the external world.’ It develops as a sort of negotiator between the id and the external world, however, as Freud himself observed, it developed as a mechanism to postpone satisfaction and to help the individual fit into societies expectations of them. The ego concerns itself with a more rational, problem-solving state of mind and will try to re-think solutions until the problem is solved. Freud made the analogy of the id being a horse while the ego is the rider. The ego is ‘like a man on horseback, who has to hold in check the superior strength of the horse.’

The main purpose of the superego is to control the impulses of the id, especially those which society forbids such as aggression or sex. It acts as a sort of moral compass for the ego, striving for perfection rather than simple realistic outcomes and consists of two components, the conscience and the ideal self. It is driven by unconscious values learned from parents and society, and because perfection is the goal, falling short can lead us to feelings of shame or guilt, so, in order to deal with these feelings, Freud declared that the ego employs a range of defence mechanisms. These defence mechanisms operate at an unconscious level and help ward off unpleasant feelings such as anxiety or guilt which may have arisen because we felt threatened, or because our id or superego became too demanding. Freud identified seven defence mechanisms, but there are much more.

As we can see above, defence mechanisms are protective, coping, strategies adopted by the brain to shield us from painful feelings. The brain has said to itself “I’m too afraid to feel this so I’m going to make something up that I won’t be so afraid of.” As a counsellor, our job is to attempt to get through these defences to the core issue that is troubling the client and to provide the support the client needs to initiate a change within themselves. This may take some time as the client may not initially trust or feel comfortable with us. They may feel frightened or embarrassed to show their true feelings. The Oxford English Dictionary defines trust as “a firm belief in the reliability, truth, ability, or strength of someone or something.” Carl Rogers said, “a good counsellor will have some sense of how to match the pace of counselling sessions to the needs of their clients.”

So, in summary, when a client first comes to us, they will probably demonstrate some of the defences written about above, we will then carefully use our counselling skills to build a rapport and try to make the client feel comfortable enough to start to discuss why they feel the need to seek counselling.