Sustainable Health Development: An Analysis of Implications of NRHM in Punjab

The National Rural Health Mission was launched in 2005 (although full fledged activities began in full swing in 2007-2008) along with other states and union territories. The thrust of the mission is on establishing a fully functional, community owned, decentralized health delivery system with inter-sectoral convergence at all levels, to ensure simultaneous action on a wide range of determinants of health such as water, sanitation, education, nutrition, social and gender equality.The paper intends to study the impact of NRHM in terms of health infrastructure and to examine the impact of NRHM on health indicators like Infant Mortality Rate, Maternal Mortality Rate and Total Fertility Rate in the state of Punjab. It also studies the differences in Punjab and Kerala in terms of Health infrastructure and Health indicators. The study results show that a number of sub centres, PHC and CHC have increased and also IMR, MMR and TFR have come down after implementation of NRHM. Sustainability in health development means improvement in the health indicators and better health care facilities for existing and future population.

Health is described as the state of complete physical, mental and social well-being (WHO). Health is a state of being hale sound or whole in body, mind especially the state of being free from physical disease or pain. Good health is a pre-requisite for human productivity and development process. Improvement in health would make a positive impact on economic development. Better health can increase the number of potential man hours for production by reducing morbidity and disability as well as reducing mortality. Better health may result in more productivity per man as well as more men available for work.

Promotion of a good health must be a prime objective of every country’s development programmes. The preamble to the WHO constitution also states that the enjoyment of highest attainable standard of health is a fundamental right of every human being and those governments are responsible for health of their people and they can fulfil that responsibility of taking appropriate measures.

“Sustainable development is development that meets the needs of the present without compromising the ability of future generations to meet their own needs. It contains within it two key concepts:

Sustainability is related to the quality of life in a community — whether the economic, social and environmental systems that make up the community are providing a healthy, productive, meaningful life for all community residents, present and future. Sustainable health care system means meeting the health and health care needs of individuals and the population which would lead to optimal health and health care outcome.

According to WHO any policy is said to be sustainable when: It continues to function effectively for the foreseeable future, High treatment coverage, integrate into available health care services, have strong community ownership and use resources mobilized by community and government.

Taking into account the above factors of sustainability National Rural Health Mission was launched by the Hon’ble Prime Minister Dr. Manmohan Singh in New Delhi in 2005 in the country, with a special focus on 18 states. It recognizes the importance of health care in the process of economic and social development and improving the quality of lives of our citizens. It provides effective health care to rural population throughout the country. NRHM initiative as a whole with its wide approach is a national movement that just a national health project.

The main objective of NRHM in state Punjab is:

Kumar (2005) reported that study on Maternal Mortality Reduction and opportunity under National Rural Health Mission.Maternal Mortality Rate continues to remain high in our Country without showing any declining period of two decades. The proportion of maternal death contributes by direct obstetrics causes have also remained more or less the same in rural areas. There is a strong need to improve coverage of antenatal care, promote institutional deliveries and provide emergency of obstetric care.

Gautham (2007) in their study “Patterns of Public Health Expenditure in India: An analysis of State, and Central Health budget in Pre and Post NRHM Period” examined the size, distribution, trends, composition and rate of growth of Union and State Health Expenditure during the period of 2001 – 2002 to 2008 – 2009.

Garg (2007) explored the current status of implementation and progress of activities as envisaged under NRHM in the high focus states of the country that are under priority, as well as non priority states.

Ashtekar(2008) emphasised on the failure of decentralisation, the lack of inter-sectoral coordination, and the undermining of traditional health support are the reasons why the National Rural Health Mission has not delivered what it had set out to achieve.

Sinha(2009) studied that NRHM provided a large canvas and platform for health action, but Shyam Ashtekar (EPW, 13 September 2008) misses many issues and does not make his critique from the right perspective. During the short period of its existence there is ample evidence to show that the mission has been moving in the right direction, crafting a credible public system of health delivery starting from the village and going up to the district level.

Hussain (2011): reported that NRHM was introduced as a flagship scheme of the United Progressive Alliance government in 2005-06 to address the needs of the rural population through an architectural correction of the health system. With the completion period drawing to a close in 2012, he critically evaluates the success of the intervention strategies under this scheme.

Pal (2011) analysed NRHM, this programme has put rural public health care firmly on the agenda, and is on the right track with the institutional changes it has wrought within the health system. He seeks to evaluate the performance of service delivery in rural public health facilities under National Rural Health Mission. The concept and working of NRHM has been discussed in brief.

Patra, Ramadass (2013) studied the impact of NRHM on the health infrastructure and on the health indicators and to analyze the determinants of health status in the health development of Odisha. The study is only based on the secondary data. The collected data was analyzed with the help of MS-WORD and Excel. The study showed that the health status of study area is very poor and is gradually increasing as a result of the implementation of NRHM and the staple reasons for this tendency are: low income, illiteracy, shortage of doctors, unwillingness doctors to go to remote areas and lack of health care facilities and lack of production of laboratory technicians and radiographers.

Thimmaiah, Mamatha (2014) intends to study the impact of NRHM in terms of health infrastructure and to examine the impact of NRHM on health indicators, like Infant Mortality Rate (IMR), Maternal Mortality Rate (MMR), Crude Death Rate (CDR) and Total Fertility Rate (TFR) in Karnataka. The study result shows that the number of Sub Centres, Primary Health Centres and Community Health Centres has increased between 2005 and 2010. Also, IMR, MMR, CDR and TFR have come down after the implementation of National Rural Health Mission.

Objectives of the study:

Hypothesis of the study:

There is significant reduction in health indicator IMR, MMR and TFR after implementation of NRHM.

Methodology of the study:

Keeping the objective of the study into mind, an attempt has been made to draw a comparative picture of the health indicators before and after NRHM. The study relies on secondary data. The data is collected from Ministry of Health and Family Welfare statistical report NRHM, statistical abstract of Punjab, NRHM Annual Reports, Five year plan reports, Economic survey, Census reports and WHO reports. The data collected has been tabulated and impact of the NRHM on sustainable health in Punjab has been gauged by employing graphical analysis, correlation techniques and t-test.

Impact of NRHM in terms of Health Infrastructure in Punjab

In the following chart it is found that Sub Centres, PHC’s and CHC’s have been increased from the year 2005 to the year 2010 after the implementation of NRHM in Punjab. 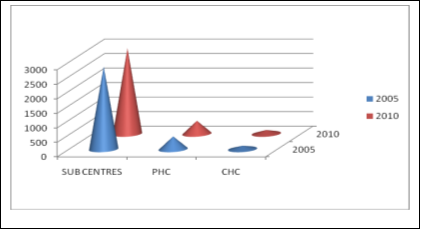 Impact of NRHM in terms of Health Indicators in Punjab

To study the impact of NRHM in terms of health indicators 3 indicators are used which are Total Fertility Rate (TFR), Maternal Mortality Rate (MMR) and Infant Mortality Rate (IMR). A time period from 2000 to 2011 has been taken 6 years before implementation of NRHM and 6 years after NRHM.

The following table shows the health indicators from 2000 to 2011:

The above charts shows the decline in Total Fertlity Rate from 2000 to 2012 and the current rate is 1.7.

The chart 3 shows a decline in Maternal Mortality Rate but in the year 2004-05 there has been increase in MMR and thereafter a decline in MMR.

Chart-4 shows a significant decline in IMR after the implementation of NRHM. As compared to other health indicators IMR has shown the maximum improvement.

Major Findings of the Study:

NRHM launched by the government of India holds great hope and promises to serve deprived communities of rural areas. The invariable existence of social cultural differences in the community has always been a challenge to health care efforts made by Government of India. Sustainibility in health is a major challenge in the hands of Government i.e. reduction in major health indicators and improvement of health infrastructure without having an effect on future generations. Sustainibility has a very wide scope and there are many reasons and policies which emphasis on Health Infrastructure and Health Indicators. But this paper only studies the impact of NRHM on the sustainibility of Health Development in Punjab.