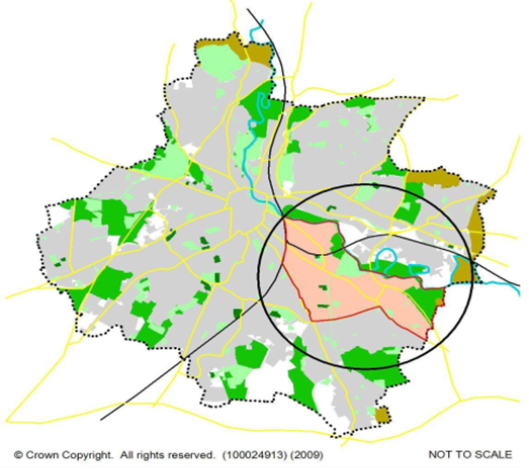 Alvaston is in the south east of Derby city centre and approximately covers 702 hectares. It has expanded with the arrival of the railways and linked employment in the 19th century (Derby city council, 2011). The population of Alvaston is 16,255. 50.3 % are females and males make 49.7% and this follows a national trend (D.C.C, 2011).

According to ONS (2011) Alvaston ward has more females than males and this follows a national trend. Naidoo and Wills (2010) points out that women live 6 years longer than men on average. This is said to be because women are more likely to report illness and are less likely to be in full time employment, therefore having easier access to healthcare while men are exposed to unsafe working environments and tend to adopt risky behaviours socially, like alcoholism and they contribute to a high number of accidents. (Annandale and Hunt, 2000) 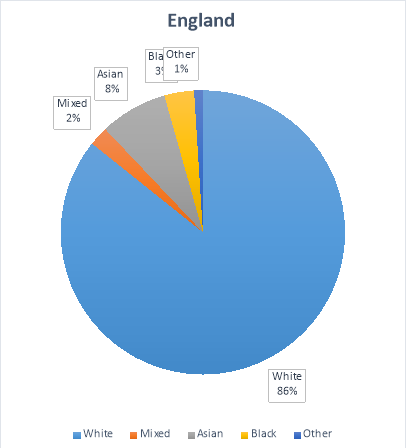 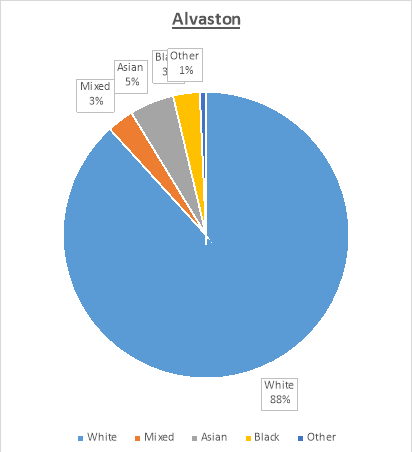 Alvaston Ward is not ethnically diverse, its population is predominantly white, accounting to 88% of the ward population, slightly higher than national average (ONS, 2011). However Asians make 5% of the biggest ethnic group population. Ethnicity plays a role in terms of illness and behaviour, furthermore some diseases are more prevalent in certain ethnic groups, and for example, cardiovascular diseases are more common in Asian men (NHS, 2015). Genetics cannot be altered but it is important for health professionals to be aware of such groups to allow proper preventative preparation and screening processes for diseases and illnesses prevalent in particular ethnic groups. 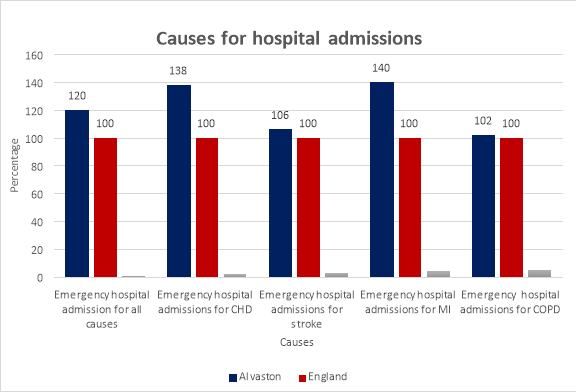 Alvaston has good access to primary care services. There are three Gp practices, four pharmacies, four dental practices and an Optometrists serving the ward (Derby city council,2012).The ward has a significantly high percentage of people with emergency hospital admissions for myocardial infarction, 40% more than national average (local health.org.uk).The main cause of MI is smoking Coronary heart disease is also high at 38% more than national average. According to Naidoo and Wills (2010) coronary heart disease is one of the most commonly reported longstanding illness in the UK. It is the most common cause of premature death, and often results from a number of lifestyles factors (see Fig ) such as diet high in fat, smoking, alcohol and lack of exercise (Naidoo and Wills, 2010). Health practitioners have a role to construct programmes to tackle causation factors and educating the public about the risks accredited to certain habits and practices. 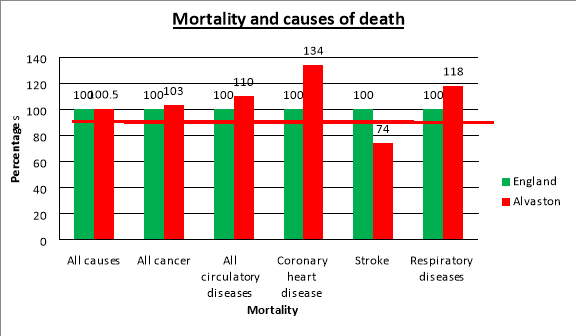 Mortality is one of the indicators of deprivation, early mortality rates from Coronary heart disease are 39% higher in Alvaston compared to nationally (PHE, 2013). The death rates from CHD has increased to three times higher among unskilled man than among professionals (DOH, 1999). CHD is caused by key lifestyle risk factors such as smoking, poor nutrition, obesity, lack of exercise and high blood pressure (DOH, 1999). The ward is also high in smoking (see lifestyle graph). Poorer people are often exposed to highest risk as low socio economic status and lack of education seem to be associated with behavioural risk factors for CHD (Hemmingway, 2007).

The increase of influencing factors to CHD start in childhood, and this has authenticated the healthy child programme.(DOH,2008). Although there are many causes of CHD, communities need to be made aware of the changeable risk factors.

Unemployment has also shown to increase the risk of CHD, unemployment levels are higher in Alvaston compared to nationally. The DOH(2000) government document ‘Saving Lives: Our healthier nation has recommended that Health and Local authorities should lead the development and implementation of a comprehensive local programme of effective policies to reduce smoking, promoting healthy eating, physical activity and reducing overweight and obesity. In Alvaston, these services are provided by the Live-well, which is a local authority project. 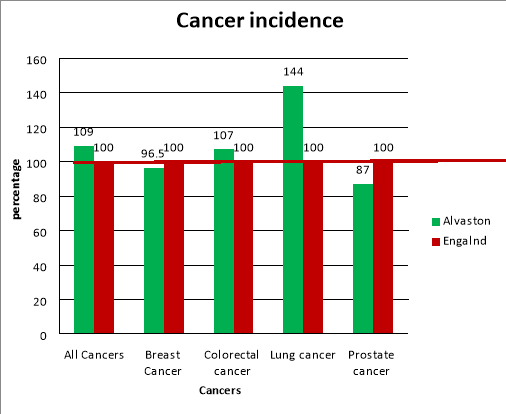 Over 250 000 people in England are diagnosed with cancer, despite the developments made to tackle it, a big gap remains in mortality rates (Naidoo & Wills, 2010). The increase in cancer rates is said to be a result of longer life expectancy, however according to ( ) work environment contribute to cancer mortalities. Workers from low class jobs are twice as likely to die from cancer as compared to professionals are (Naidoo and Wills, 2010). In Alvaston the majority of the workforce are in elementary jobs (see Fig ) and there are many smokers therefore increasing the prevalence of lung cancer to 44% more than national average. The NHS Framework, a strategy for cancer has set out actions to be used to tackle preventable causes of cancer (DOH, 2011). The focus is primary, this is aimed at health education and support for behaviour changes, especillially in relation to smoking and healthy eating. And secondary focus is intended at increasing the uptake of screening services (DOH.2011). And some of the environmental factors that are linked to cancer are being acknowledged and developed (Naidoo and Wills, 2010). 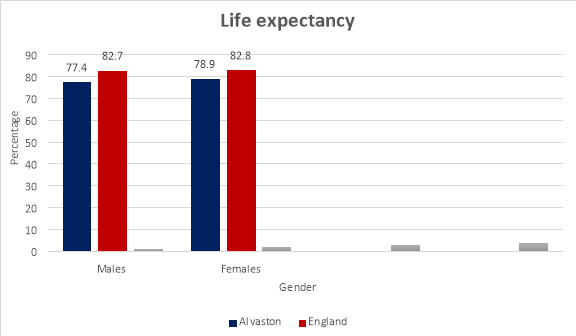 Life expectancy at birth defects in Alvaston is worse off compared to national average, Males at 5% worse and females at 4% worse (ONS, 2011). According to Doyal and Payne (2011) Lower life expectancy is linked to deprivation and lower socio economic status. 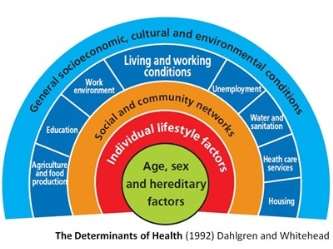 Determinants are described by World Health Organisation (2013) as the causes that impact health, such as conditions in which people are born, grow, live, work, and age including the health system. Some of these determinants are changeable like social, economic, environmental conditions that influence the health of individuals and populations (Marmot, 2010).Availability of resources that improve quality of life can have a big impact on population health outcomes, for example, availability of healthy foods, affordable housing, access to education and health services (Marmot, 2010) and these determinants can be altered either at community or social policy level. 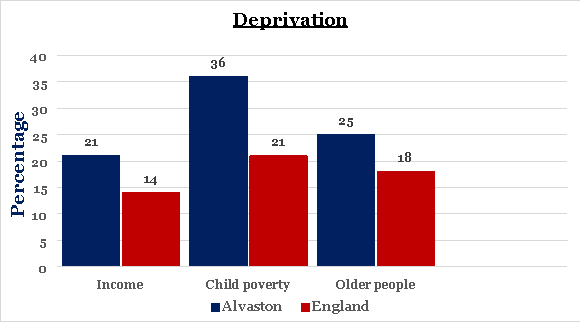 Index of Multiple Deprivations (IMDs) measures level of deprivation in lower layer super output areas (LSOAs) (Derby city council, 2012) Childhood poverty is significantly high in the ward at 15% higher than national average, disadvantaged older people measure high at 25%, makes it 7% higher than national average, income deprivation also measure at 7% higher than England average (Derby city council, 2012). Green et-al (2015) points out that constant childhood poverty is damaging as it does not only affect in short term but it has long lasting effects and it adds to sustaining cycles of deprivation.

In order to reduce childhood poverty, the government has set strategies to tackle inequalities (Green at-al, 2015). Fair society, healthy Lives document, and its first recommendations from the Marmot review (2010), are that every child is given the best start in life. These recommendations are sanctioned through a wide range of policy initiatives, including sure start, healthy child programme and Child Poverty Act, 2010. (Marmot, 2010). 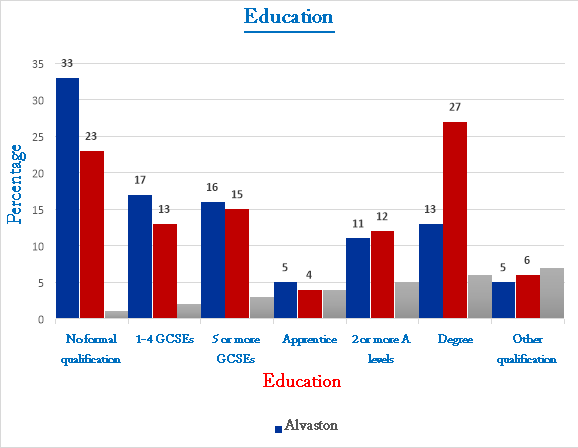 Education is an important social determinant of health Ungerleider et-al (2009). There is a pointedly higher percentage, totalling to 33% of people with no qualification in Alvaston than England average of 23% (Derby city council, 2011). Education is linked to other health determinants in that good education increases the prospects of getting a safe and well-paying job with good working conditions (Benatar and Brook, 2011).educated individuals tend to adopt healthy lifestyles behaviours, furthermore it is 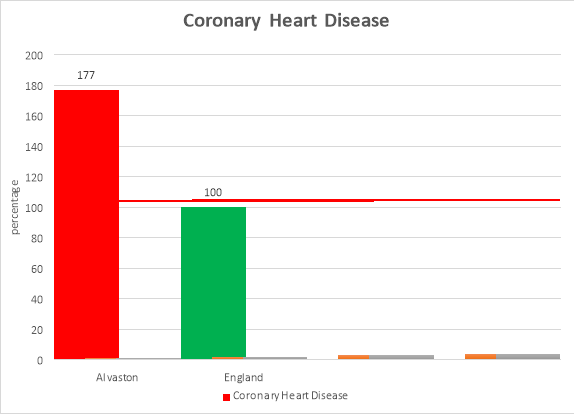 Coronary heart disease is described as the narrowing of the coronary arteries, which are one of the important structures in the heart, due to build-up of fatty material within their walls and therefore damaging these vessels and thus limiting their ability to deliver blood to many organs including the heart.(BHF,2010)(Granato,2008). Coronary heart disease is also classed as cardiovascular disease, and these are said to be one of the main causes of death in Europe (BHF).

In Alvaston there is a substantial percentage of coronary heart disease, amounting to 177 percent, almost doubling national average amongst the under 75s (ONS, 2012).

According to the Derby city council (2012) health and wellbeing is determined by many factors, and it is clear that effects on health can be due to a number of interrelating variables. Coronary heart disease is caused by many lifestyle risk factors such as smoking, unhealthy diet (high in fat and salt), obesity and not exercising. Other factors include family history, ethnicity and co-existing predisposing factors like Diabetes and High blood pressure (Naidoo and Wills, 2010). The more risk factors an individual has the more they are likely to develop Coronary heart disease and the risk increases with age (British heart foundation, 2012).

There is a small percentage of people eating healthy on the Ward and as already discussed that this is linked to CHD. Obesity increases the risk by 46 percent and physical inactivity by 37 percent and this reflects the high levels of the disease in the ward (Derby city council, 2012). Although coronary heart disease typically occur in middle age or later, it is said to be higher among the lower socio-economic communities and more men die as a result of CHD while women are more likely to die from stroke, and this is said to be due to behavioural factors associated with the risks (Doyal and Payne, 2011).

To combat Heart disease the government has put in place many policies in collaboration with the Food Standards Agency to reduce the intake levels of unhealthy eating and salt (Marmot, 2010) (WHO,2015). The Department of Health document, ‘Saving Lives: Our healthier Nation(1999) has also made recommendation to tackle coronary Heart Disease There has been a reduction in the advertisements for unhealthy foods during children’s television programmes (NICE, 2010). Clear labelling and traffic light system on food labels were introduced to encourage people to make healthy option choices (DOH, 1999) (British heart Foundation). Promoting physical activity in the workplace is very well encouraged across the country and the use of green space areas to encourage exercise (Marmot, 2010) as well as introducing plain standardised tobacco packaging and banning tobacco advertisements and Smoking cessation (The white paper,2010).