Hauora Maori trends and Paradigms from 1919 to the present day

The region that I identified in my research is Tamaki Makaurau and I chose this region because there was a whole lot of significant research done in this research that matched with my Hauora Maori trends. To do a research one needs to have a research methodology that explains the research question and why the question is vital. A methodology gives us direction of our research and the possible implications of the research when it is completed. The methodology used in this research is Maori-centered research and this methodology was used because Maori were the significant participants and senior members of the research teams were Maori and also to find out what causes the diseases in them so that a possible solution is made in order to prevent diseases in future.

The 3 trends that I have identified for my research are as follows:

What are the factors contributing to Maori teenagers aged 13- 18 years old becoming obese in Otahuhu College in the year 2013?

To conduct this research firstly, a research team was sent to Otahuhu College to gained consent from the school and the student to carry out a research on them. Secondly questionnaires were made and distributed to students who were Maori and in the age of 13- 18 years old. Thirdly to get the appropriate information a face to face consultation was also done with the students in their break times. Lastly observation was also done by the research team to see the students eating habits and what leads them to become obese.

While doing this research Te Whare Tapa Wha model was used to view and analyze my obesity trend holistically. Te Whare Tapa Wha is a health model that looks at an issue or problem holistically, considering the four aspects which are Taha tinana (physical health), Taha wairua (spiritual health), Taha whanau (family health), and Taha hinengaro (mental health). While doing the research on my obesity trend these four factors were used to find out what are the contributing factors of Maori teenagers aged 13-18 years old becoming obese in Otahuhu College in the year 2013.

The issues identified that are the barriers to access primary and secondary health service are as follows:

Affordability- for a teenager to access primary and secondary health service to get help about his/her health condition which in this case is obesity, will be difficult to access because of the financial problem and if a teenager who is unemployed it will be difficult for them to ask their parents for money to join gym or join any diet programs.

Discrimination- a teenager will not want to access primary and secondary health service because of their condition and they may feel shame to visit GP’s or gym because they might feel that other people are criticizing them.

Information is collected and collated in accordance with the research methodology and this is done by identifying the region and the year in which Maori teenagers were becoming obese in Otahuhu College. The method used was Maori centered research because the participants of the research were Maori and the research was done along with the Maori senior members.

What Percentage of Maori men aged 30-40 years old getting lung cancer in South Auckland in the year 2011?

To carry out this research I used statistics from census website, because Census NZ showed the relevant answers to my researchable question.

To carry out this research I used the Whanau Ora approach as to show that health services and support are given to people under one roof, so why do still people not want to access these service?. This research looks at lung cancer in the whole area of South Auckland so Whanau Ora approach was useful to get the bigger picture of what contributes to Maori Men getting lung cancer in this area.

The issues identified that are the barriers to access primary and secondary health service are as follows:

Affordability- if a Maori men has lung cancer then he will hesitate to go to the GP or access other primary and secondary health service because of their financial status. They are unable to afford and undergo surgeries because their first priority is their family and their needs and while fulfilling his family needs he forgets about himself and his health condition.

Information is collected and collated in accordance with the research methodology and this is done by identifying the area in which the research will be carried out and also the demographics and specific ethnicity the research is being done.

What are the contributing factors of children aged 6 – 12 years old have asthma in Manurewa Primary School in the year 2011?

This research was done by following the Te Whare Tapa Wha model as it shows the problem or issue that the children are having in a holistic way. The main aspects to take into account were the physical health, emotional health, spiritual health and family of the children that may be the contributing factor of children getting asthma. We looked at a Asthma from a Te Whare Tapa Wha model which is physical health, the health problem itself, emotional health of the child, spiritual health, whether the child is spiritually connected to its cultural beliefs and values and also the family, sometimes asthma can be considered as a heredity disease, that is passed from generations to generations, so keeping all this aspects in mind this research was carried out and results were found.

The issues identified that are the barriers to access primary and secondary health service are mostly racism and lack of education. After colonization , Maori have lost some of their resources and their self esteem level has decreased and other people has started to discriminate them and so to the present day Maori people are being the victim of racism. Other ethnicities call Maori with different names and some people does not respect their culture and that is why Maori people hesitate to access primary and secondary services and also Maori people choose to use their Maori traditional medicines and methods before going to the GP. Some Maori people are less educated and are unaware of the services that they can access in order to treat asthma and getting prevention.

Information is collected and collated in accordance with the research methodology and this is done by doing the research by using the Te Whare Tapa Wha model and looking at the problem holistically and keeping in mind the four dimensions of the model. Also for this asthma trend the participants chosen were children because asthma is mostly common in children in NZ and especially with children who are in their primary school and are in the age of 6- 12 years old.

Linda Tuhiwai Smith’s Decolonizing Methodologies, sets extensive critiques to western paradigms of research and knowledge from the position of an indigenous Maori women who was colonized. This book identifies research as a significant site of struggle between the interest and ways of knowing the western of the other. For e.g., Maori has been given a name, a face, a particular identity, namely indigenous people. Many researchers, academics and projects as serving The history of Western research through the eyes of the colonized strongly agree with Linda Tuhiwai Smith’s research and points she mentioned because it is relevant in todays world.

Sourcing of information was done by using websites that were related to my three health trends and the literature review was written by getting the information out from the Linda Tuhiwai Smith’s book Decolonizing Methodologies.

Procedures for recording and analyzing information

For my lung cancer trend the procedures for recording and analyzing information was done by looking at the statistics of people who had lung cancer in South Auckland region in the year 2011 and also identifying the common problem that causes lung cancer in Maori men and finding out possible solutions to prevent it.

The results found shows that 48 % of the Maori adults including teenagers are were obese in the year 2013.

Table 2 Lung cancer registrations and deaths, by ethnicity and gender

This graphs shows that asthma is very common amongst children as well as young people and this graph also shows the ethnicities and age group that commonly have asthma. 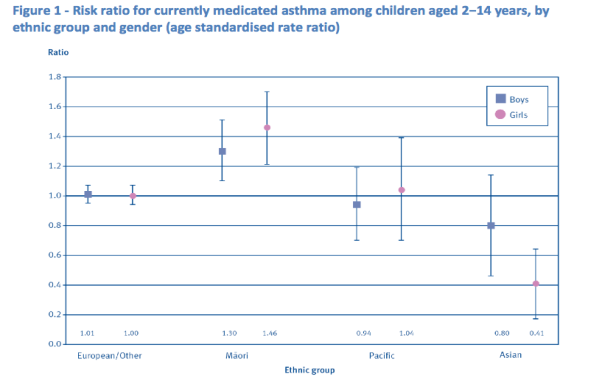 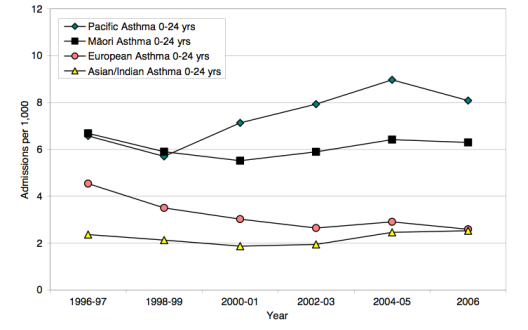 Summary of the findings

Lung cancer is identified as first leading cancer rate in cancer registration, the total number of lung cancer registration is 1,127 and 31.4 % among Maori population. This is due to the massive usage of tobacco by Maori people. Lung cancer also been high cause of cancer death within Maori population. In type 2 diabetes there are high rate of hospitalization of 3,854 incident and 825 registration recorded in death. Over past 10 year, NZ European children with asthma has declined significantly but rate of Maori children both sex with asthma is not decreasing.