Periodontitis and all periodontal diseases are bacterial infections that destroy the attachment fibers and supporting bone. Left untreated, these diseases can lead to tooth loss. The main cause of periodontal disease is a bacterial plaque, many options are available to treat this disease including non-surgical,surgical,and recent regenerative materials. GFs are natural biological mediators that regulate key cellular events that are part of the process of tissue repair and regeneration. Recent advances in the areas of cellular and molecular biology allowed better understanding of the functions of GFs and their participation in the different phases of wound healing. In vitro and in vivo studies have confirmed that GFs can enhance the capacity of tissues to regenerate by regulating cell chemo attraction, differentiation and proliferation. This review focuses on five growth factor families that have potential for inducing periodontal regeneration based on their ability to stimulate osteoblast and periodontal ligament cells in vivo and vitro.

Periodontitis is a widely prevalent inflammatory disease of the tissues supporting the teeth, characterized by a progressive loss of bone and attachment. The ultimate goal of periodontal therapy is the regeneration of periodontal tissues, which consists in stimulating new cementum formation, new alveolar bone apposition, and a functionally-oriented periodontal ligament reconstruction.

Conventional treatment procedures may be ineffective in achieving bone regeneration, leaving both the clinician and the patient dissatisfied with the outcome. Growth factors (GFs) have long been believed to have the potential to accelerate the healing process and, therefore, enhance tissue regeneration in challenging clinical scenarios.1

MODE OF ACTION OF GROWTH FACTORS:

To evoke a biologic effect, a growth factor must be synthesized by an originating cell, travel to its target receptor, interact with target receptor, or binding protein, and activate second messengers or terminal effectors.2,3

Local mode of action is more associated with the term growth factor and involves Paracrine, Autocrine, Juxtacrine, and Intracrine modes.

Autocrine mode of action – Growth factors synthesized by one cell, secreted in a soluble form outside the cell and then bind to surface receptors on the same cell to evoke an effect is autocrine mode of action. Example includes: TGF – β, which are produced and act on epithelial cells, and BMP’s, which are produced and act on osteoblastic cells. (fig 1)

Paracrine mode – Growth factorsproduced by one cell, with receptors present on another cell in the local micro environment is the paracrine mode of action. Here the mediators are secreted in soluble form and binds to its receptors on the target cell to evoke its effect. (fig 3)

Juxtacrine mode – It is similar to paracrine effects except that the factor produced by the cell of origin is cell surface bound and requires cell contact by the target cell to evoke a response. (fig 4) 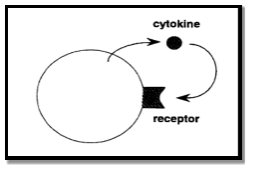 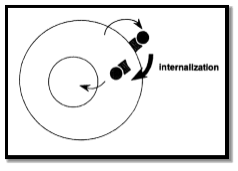 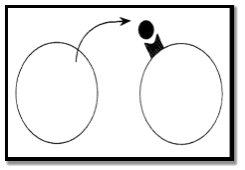 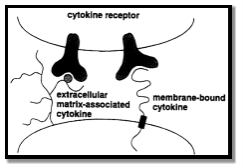 For a growth factor to exert an effect, its designated receptor must be present in sufficient quantity, orientation, and functional activity to transmit appropriate stimuli.

Growth factor receptors can be divided into 2 broad categories:

The most common prototype growth factor receptor is the cell surface receptor, which can be further divided into three main categories:

Therapeutic application of growth factors to restore damaged tissues aims at regeneration through biomimetic processes, or mimicking the processes that occur during embryonic and post-natal development.7

The complexity of these events suggests that creating an optimal regenerative environment requires the combination of different growth factors as found in natural reparative processes. The use of a single recombinant growth factor may also induce several molecular, biochemical and morphological cascades that will result in tissue regeneration.8

The most studied growth factors for periodontal regeneration have been PDGF, IGF, FGF-2, TGF-β and different BMPs.

The PDGFs are a family of dimeric disulfide – bound growth factors that exert their biologic effects by activating 2 structurally related tyrosine kinase receptors, the PDGF- α and PDGF – β receptors.

PDGF was the first growth factor to be evaluated in preclinical periodontal and peri-implant regenerative studies. Proliferation, migration and matrix synthesis were observed on cultures of periodontal cells stimulated by PDGF, including gingival and PDL fibroblasts, cementoblasts, preosteo-blasts and osteoblastic cells [9-14]. These effects were shown to be time- and dose dependent 14. The PDGF family is composed of four growth factors: PDGF- A, -B, and the most recently discovered PDGF-C and -D 15. All of these participate in the wound-healing process, but, until now, only the three isoforms PDGF-AA, BB and AB were evaluated in periodontal therapy. PDGF-BB is the most effective on PDL cell mitogenesis and matrix biosynthesis 16,17.

These are a family of single chain serum proteins that share 49% homology in sequence with pro- insulin. IGF-1 and IGF- 2 are two polypeptides from this group. IGF-1 acts as progression factor, also stimulates bone formation and have an effect on periodontal ligament cells. IGF-I is also important for bone remodeling and maintenance of skeletal mass and plays significant role in age-related osteoporosis.

IGF-1 is capable of preventing apoptosis in fibroblasts by activation of multiple signal transduction pathways. IGF-1 has also been shown to regulate DNA and protein synthesis in periodontal ligament fibroblasts in vitro and to enhance soft tissue wound healing in vivo. Furthermore, studies have suggested variable responses of periodontal tissues to IGF-1 depending upon anatomical sites and a differential involvement of IGF-1 in periodontal wound healing and regeneration.18

The angiogenic and fibroblast stimulatory properties of FGF-2 during wound healing and its chemotactic and proliferative effects on PDL cells suggest its use for periodontal regenerative therapeutic approaches19,20. In preclinical studies, this growth factor was evaluated for the treatment of different types of periodontal bone defects, in dogs and non-human primates. Despite different concentrations of FGF-2 and different delivery systems used in the studies, all showed an improvement in the periodontal tissue regeneration, compared with control groups. Studies that evaluated more than one concentration of FGF-2 suggested that its effects are dose dependent.21,22

It is a member of a large family of biologically active protein hormones that are structurally related but differ markedly in their function. TGF – β consists of 2 subunits held together by covalent bonds. Five different genes are identified that encodes TGF- β polypeptide TGF-β has 5 closely related isoforms in vertebrates, out of which 3 are found in mammals (TGF-β1, TGF-β2, & TGF-β3).

The three major activities of TGF-ßinclude inhibition of cell proliferation, enhancement of extracellular matrix deposition and the exhibition of complex immune regulatory properties. It is a major regulator of cell replication and differentiation. It can stimulate or inhibit cell growth. It can also modulate other growth factors like PDGF, EGF and FGF. It inhibits epithelial cell proliferation and stimulates mesenchymal cells.

TGF-β1, the most abundant isoform of the TGF-β family and found primarily in the platelets and osseous tissue, has been used for this application.It has a role in recruiting and stimulating osteoprogenitor cells to proliferate and suggests to support periodontal wound healing and regeneration.23

The name Bone Morphogenetic Protein was given in 1965 by Urist .Bone morphogenetic proteins (BMPs) are a group of regulatory glycoproteins that are members of the transforming growth factor-beta superfamily.24They stimulate angiogenesis and migration, proliferation and differentiation of mesenchymal stem cells into cartilage and bone forming cells. More than 20 BMP-related proteins have been identified, several of which induce bone formation.25

In the field of periodontal regeneration, much of the research interest has focused on BMP-2, BMP-3 (osteogenin), and BMP-7. Recent studies have utilized recombinant human BMP to determine their potential for correcting intrabony, supra-alveolar, furcation, and fenestration defects. BMPs also show much promise in promoting dental implant wound healing.24

Several matrices and delivery systems have been used and evaluated for their efficacy and biocompatibility as carrier for growth factors. Two common types of polymeric materials used in growth factor delivery strategies are natural collagen-derived materials and synthetic polymers of lactic and glycolic acid (i.e., Poly [lactide-co-glycolide]). Extracellular matrix-derived macromolecules such as collagen have been used for many years in biomaterial application, and it is now possible to create artificial analogues of extracellular matrix proteins using recombinant DNA technology.1

Carriers can be of different types such as solids, gels or combinations.25A variety of new injectable materials such as hydrogels are also being developed for growth factor delivery applications and have been of special interest. These injectables are especially attractive because, in clinical application, they can allow for minimally invasive delivery of inductive molecules.1

Growth factors may regulate the repair and/or regenerative process which are impaired in presence of bacteria and their products in periodontal disease. Thus, the objective of growth factors administration in the treatment of periodontitis is to mimic the normal developmental process & enhance normal wound healing response to promote complete regeneration of all attachment structures. Basic and clinical research is in progress to evaluate the role of growth factors in periodontal wound healing.