ABSTRACT: A simple, accurate,precise and economical procedure for simultaneous estimation of Desloratidine and Montelukast in combined tablet dosage form has been developed utilizing concept of simultaneous equation method. The method is based upon determination of Desloratidine at 269nm and Montelukast at 283nm in methanol. Different analytical parameters such as linearity, precision, accuracy and ruggedness were determined according to ICH guidelines. Deslortidine and Montelukast at their respective wavelength shows linearity in the concentration range of 5-30 mcg/ml and 2-22mcg/ml.respectively.The method was validated statistically. The results of analysis formulation given as percentage of label claim were found to be 100.4% and 101.% for Desloratidine and Montelukast respectively. Therefore, the proposed method can be used for the routine analysis of both drugs simultaneously in quality control laboratories.

Desloratidine(DES) is chemically 8- chloro-6, 11-dihydro-11-(4-piperdinylidene)- 5H benzo[5,6]cyclohepta[1,2-b]pyridine.Desloratidine is a anti- histamine clinically effective drug in the treatment of Asthama. It is soluble in methanol, ethanol, water and practically insoluble in acetonitrile. Montelukast (MON),is2-[1-({[(1R)-1-{03-[(E)-2-(7-chloroquinolin-2-yl)ethenyl]phenyl}-3-[2-(2-hydroxypropan-2-)phenyl]propyl]sulfanyl}methyl)cyclopropyl]acetic acid is a widely used as Anti-arrhythmatic and Anti-asthamatic agents. Montelukast and Desloratidine is available in combined dosage forms as film coated tablets (MONDESLOR). Each tablet contains 10mg of Montelukast and 5 mg of Desloratidine. It is used for the treatment of Asthma. 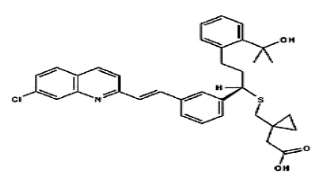 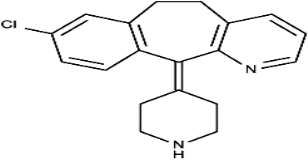 The 10 mg of standard Montelukast and Desloratidinewere weighed accurately and transferred into 100 ml volumetric flasks seperately. They were dissolved in methanol and diluted up to the mark by using the solvent methanol to obtain a final concentration of 100μg/ml. The resulting solutions were used as a working standard solutions.

The aliquot portion of stock solutions of Montelukast and Desloratidine were diluted approximately with methanol to obtain concentration of 10 mcg/ml of each drugs.These solutions were scanned in the range of 200-400 nm in 1cm cell against blank .From the overlain spectra the wavelength selected for the estimation are 269 nm and 283nm for montelukast and desloratidine respectively.

For analysis of commercial formulations 20 tablets (MONDESLOR) each cantaining 10mg of montelukast and 5mg of desloratidine were accurately weighed and the average weight was calculated and finely powdered.A quantity equivalent to 10mg of montelukast dissolved in methanol in 100ml volumetric flask and to it 5mg of desloratidine was added(standard addition method). sonicated to dissolve it completely and volume was made to the mark with methanol .mixed well and filtered through 0.45µm filter to get the final concentration of 100µg/ml. finally 10mcg/ml working concentration of each desloratidine and montelukast was prepared.

This solution was scanned over the range of 200-400 nm ,using two sampling wavelengths 269nm and 283nm determined the concentration of these drugs in tablet formulation

A1 = absorbance of formulation at 269nm.

ax1 = absorptivity of Desloratidine at 269 nm.

ax2 = absorptivity of Desloratidine at 283 nm.

ay1 = absorptivity of Montelukast at 269 nm.

ay2 = absorptivity of Montelukast at 283 nm.

VALIDATION OF THE METHOD:

1) LINEARITY: Standard stock solution of Montelukast and Desloratidine: 10 mg of montelukast and desloratidine were accurately weighed and transferred into a clean and dry 100 ml volumetric flasks, dissolved with sufficient volume of methanol seperately .The volume was then made up to 100 ml with methanol to obtain the concentration of 100 μg/ml. Working standard solution: The aliquot portion of the stock solution was diluted approximately with methanol to get a concentration of 2-22 mcg/ml of montelukast and 5-30mcg/ml of desloratidine. Serial dilutions of concentration range were prepared from the working standard solution. These dilutions were scanned at the detection wavelength of 269 nm and 283nm using methanol as blank. The regression equation, Y- intercept and correlation coefficient were calculated. The linearity was thus determined and the concentration range was selected.

2) LIMIT OF DETECTION AND LIMIT OF QUANTITATION:

SD = The standard deviation of the response

S = The slope of the calibration curve (mean)

SD = The standard deviation of the response

S = The slope of the calibration curve (mean)

The accuracy of the method was ascertained by carrying out recovery studies using standard addition method. The recovery studies are performed to determine if there was any positive or negative interference from excipients present in the formulation. The percentage recovery results revealed that the values were near to 100%, which indicates that the proposed method is accurate as the results are within the official limits. It also reveals that the commonly used excipients and additives in the formulation were not interfering with the proposed method

Precision was found by carrying out the analysis of the standard drugs at two different concentrations in the linearity range of drugs for three times on the same day. Each concentration was applied in duplicate and % RSD was calculated (Table no :5)

Montelukast and Desloratidine showed maximum absorbance in Methanol at 269 and 283 nm.The proposed method for simultaneous estimation of both the drugs was validated as per the ICH guidelines The linearity was observed in the concentration range of 2-22 mcg/ml for montelukast and 5-50mcg/ml for Desloratidine with regression co-efficient of 0.998 and 0.998.Amount of drugs estimated by the proposed method was in good agreement with the label claim.The accuracy of the method was assessed by recovery experiments . Recovery was close to 100% for both the drugs.

The present study comprises a UV spectroscopic method of analysis for the simultaneous estimation of montelukast and Desloratidine in tablet dosage form.From the study of validation parameters,itwas observed that the method is specific,accurate,precise,reproducible .The proposed method could be applied to routine analysis in quality control laboratories.

Table No.1 Calibration data of deslortadine.

Table No.2 calibration data of montelukast.

Table No:3 Results of analysis of tablet formulation.

Table no:4 Results of recovery studies

Table No:5 Results of precision studies. 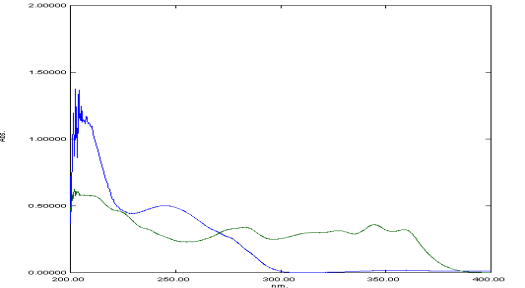 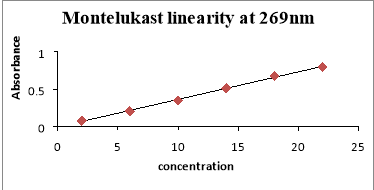 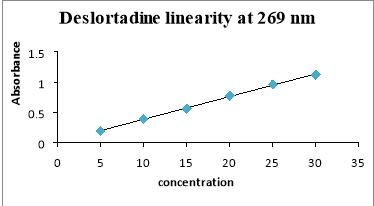 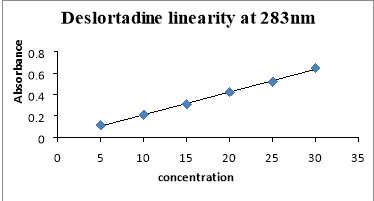