Cancer is among the leading causes of death in the world. In 2012, cancer was responsible for 8.2 million deaths and 14.1 million new cases were recorded, accounting for 65% of the deaths in low-middle income countries (IARC, GLOBOCAN, 2012a). Cancer is a multistage process characterised by uncontrolled multiplication of abnormal cells which causes a lump to develop. This lump, known as a tumour, is named after the part of the body where it develops (American Cancer Society, 2012). Although mortality rates are higher in low-middle income countries, increased incident rates have been found in developed countries (IARC, GLOBOCAN, 2012a). An increase of 8 million cases per year is expected by 2030 (WHO, 2014).

A number of factors are thought to be responsible for causing cancer such as genetic factors, chemicals and radiation, viruses or infections, alcohol use, tobacco, diet, and physical inactivity, age and several more that still remain unidentified (WHO, 2014; American Cancer Society, 2012). Lifestyle plays an important role in health. About 30% of deaths due to cancer are associated with poor lifestyle behaviour, which is marked by obesity, low fruit and vegetable intake, consumption of alcohol and tobacco use (WHO, 2014).

Despite tobacco being the most preventable cause of death it kills 1 person every six seconds. The tobacco epidemic kills more than 5,000,000 people in a year – which is more than the combined number of deaths by malaria, tuberculosis and HIV/AIDS (WHO, 2008). Tobacco use contributes to about 20% of cancer deaths globally (WHO, 2014).

A plethora of evidence exists demonstrating the multipotent carcinogenic nature of tobacco smoke, and its ability to cause cancer at multiple sites in the body and not just the lungs. It can cause cancer of the renal pelvis and bladder, oral cavity, larynx, pancreas, nasal cavity, liver, cervix, stomach, kidney and oesophagus (Vineis et al., 2004). Smokers are 7 times at more risk of dying from these cancers than non-smokers (Kenfield et al., 2008)

In 2012 stomach cancer, also known as gastric cancer, was ranked as the third major cause of cancer related mortality in the world with 723,000 deaths reported (IARC, GLOBOCAN, 2012b). An estimated one million cases of stomach cancer were recorded in the year 2012. This represents 6.8% of the total cancer cases reported. Stomach cancer is the fifth most common cancer worldwide with approximately one million cases in the following year; of which 70% of the cases occurred in low- middle income countries (IARC, GLOBOCAN, 2012b). The numbers of stomach cancer cases have significantly reduced over the years (IARC, GLOBOCAN, 2012b) and several epidemiological studies have been conducted to identify the causes of the disease and the reason for this decline. Figure 1 demonstrates estimated stomach neoplasm incidence and mortality (age- standardised per 100,000) worldwide in the year 2012. Distinct geographical differences exist with two third of the cases occurring in developing countries, and 50% of the total gastric cancer cases occurring in Eastern Asia. Eastern Asia has both high incident as well as mortality rates, but Western Africa has the lowest incidence and North America the lowest mortality rates. The incident rates (age standardised per 100,000) of stomach cancer are twice as high in men as compared to women. The striking time trends, geographical variations and gender distribution suggest the possible contribution of lifestyle and environmental factors to the aetiology of carcinoma of the stomach. 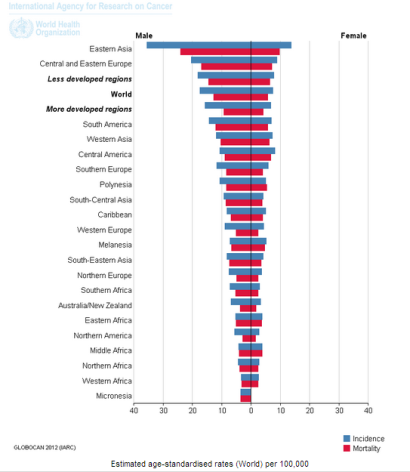 2.2 EPIDEMIOLOGICAL STUDIES SHOWING ASSOCIATION BETWEEN STOMACH CANCER AND TOBACCO USE

Infection with Helicobacter pylori is one of the main causes of gastric neoplasm (Tredaniel, 1997) however, in certain countries like Africa, where H.pylori has high prevalence, stomach cancer rates are still low (Campbell et al., 2001; Brenner, Rothenbacher and Arndt, 2009). This suggests that there may be other factors too responsible for gastric neoplasm. A large number of studies have demonstrated a strong positive association between stomach cancer and tobacco use. The association is thought to be because of the carcinogenic substances present in tobacco smoke. Tobacco smoke contains about 70 carcinogenic substances, like hydrogen cyanide, arsenic, cadmium, carbon monoxide and others, which when inhaled enter the lungs, and is carried by the blood stream to other sites in the body, depleting the sites of oxygen necessary for survival, and more importantly, damaging the DNA making cells to proliferate in an abnormal manner and cause cancer (Cancer Research UK, 2012).

A number of case- control studies have demonstrated stomach cancer to be a tobacco related cancer (Minami and Tateno, 2003; Cai, Zheng and Zhang, 2003). A fourteen year prospective study conducted by the American Cancer Society showed a positive correlation between stomach carcinoma and the use of tobacco (Chao et al., 2003). According to the study, any form of tobacco use (pipe, cigar, bidi, chewing tobacco, cigarette smoking and snuff) was considered to be linked with higher incidence and mortality rates of stomach cancer. The study included 508, 351 men and 676,306 females aged thirty years or older, residing in a house with at least one individual forty-five years or above. The individuals were chosen from fifty states in the District of Columbia and Puerto Rico. Men were made to complete questionnaires, with questions about current or past use of any tobacco product, while women only asked about use of cigarette smoking. The study was adjusted for all variables thought to act as confounding factors; age, race, family history, education, diet, use of multivitamins and aspirin (Chao et al., 2003).

(Modified and prepared in MS. Word according to required data)

In order to assess the possible causal relationship between carcinoma of stomach and the use of tobacco particularly in current tobacco smokers, data was withdrawn from WHO database. Data for nine countries with the highest incident rates were taken from IARC, GLOBOCAN (2012) database and the tobacco rates for each country were taken from “Tobacco Country Profile” from the WHO Report on Global Epidemics (WHO, 2013). The data from the two sources was combined to form one table for purpose of analysing the relationship.

In order to get a clear picture, a graph (Figure 2) was drawn from the data in Table 2 to understand if there was a co-relation between the exposure, i.e., tobacco use and outcome, i.e., stomach cancer and if it was appropriate to refer gastric cancer as a “tobacco-related cancer” as has been referred by many other studies. 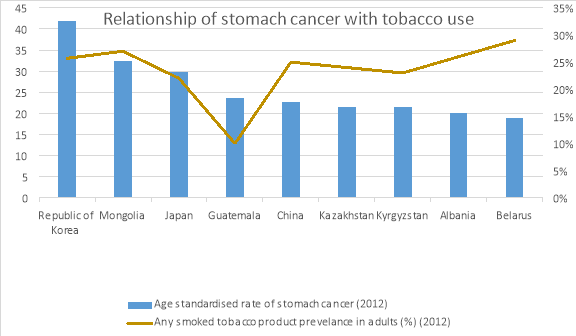 Figure 3: Incidence of stomach cancer and tobacco use

Data from IARC, GLOBOCAN (2012) and Tobacco Country Profile (WHO, 2013) collected in MS Excel and graph generated in MS World

Several epidemiologic studies have shown a positive causal relationship between tobacco smoke and increased incidence of stomach cancer. Evidence suggests that 20% of the stomach cancer cases in the United Kingdom can be attributed to the use of tobacco (Cancer Research UK, 2014). However, a few studies like the self-analysis of data above were unable to find any positive association between stomach cancer and tobacco use.

In a twenty eight year cohort study conducted in Norway, with 26,000 Norwegian men and women, no association was found between stomach cancer and tobacco consumption (Engeland, 1996). Similarly a case control study carried out in Japan seemed to show no relationship of tobacco use and increased rates of stomach cancer (Murata, 1996).

When considering epidemiological studies and their results, flaws in data collection and study design must be considered before making an inference. Case control studies are most susceptible to bias. There are high chances of selection bias, especially when the investigator is not blinded. Another bias that has the potential to effect results of case control studies is attention bias, which is also known by the Hawthorne effect, according to which people tend to act and behave differently when they know the relation being studied (Bruce et al., 2008). Similarly, cohort studies may produce uncertain results because of their long duration which results in loss to follow up, also known as attrition bias.

Questionnaires are considered to be the main research tools when it comes to collection of data from a large sample population. Although questionnaires are an effective and cheap way of gathering data, there are some possible errors that should be taken care of. These specifically include sampling error and measurement error (Bruce et al., 2008).

An extremely important factor that can be attributed to the difference in results is confounding. For factors to be considered confounders, they need to have an association with the outcome of interest. Alcohol consumption can be considered a confounding factor in the relationship between stomach cancer and tobacco use. Alcohol consumption is considered to have a synergistic effect (Chen, 2000). However, the synergistic effect of alcohol is considered to be controversial, with some studies demonstrating no effect of alcohol consumption on stomach cancer rates (Murata, 1996; Cancer Research UK, 2014). Another main factor is H.pylori infection, which is the considered to be the main cause of carcinoma of the stomach. Studies have showed that in tobacco users who have H.pylori infection, they are 10 times more likely to develop carcinoma of the stomach than those who do not smoke tobacco (Cancer Research UK, 2014; Tredaniel, 1997). Other possible confounders include diet.

Although differences in results can be observed, smoking is known to be an established risk factor for most cancers and diseases. It shall be inappropriate to conclude that no association exists between stomach cancer and the consumption of tobacco. The magnitude of the association can vary but it would be wrong to deny any association at all. It can thus be concluded, that tobacco use, may not be an independent factor like Helicobacter pylori in the aetiology of stomach cancer, but it is a contributing factor for the development of carcinoma of stomach. The use of the word contributory does not by any way rule out the possibility of tobacco having a direct effect on stomach cancer, it in fact, takes into account the persistent risk of cancer among smokers and indicates that had smoking not exist, a large and significant proportion of disease burden would not exist in this world.