How peers feel about their father’s occupation influences children’s attitudes. From contacts with their friend’s parents or what they see on television or read in books, children build up concepts of an ideal mother and father.

Children feel that if they have better homes, better play equipment than their peers, they feel superior. If on the other hand their socio-economic status is inferior, it is likely to lead to feelings of inferiority. Children like to emulate their parents and thus, bad habits in parents may naturally pass on to them.

Ganga et al in their study observed that in 66.2% of children there was history of alcohol abuse by fathers, with most of their income wasted on liquor and gambling. All the boys studied were from an urban or semi-urban area belonging to poor socio-economic category. In 40. 9% boys both parents were illiterate, in 33 8% only father was a functional literate. 52% of the parents were daily wage earners with irregular employment and 14. 2% were in quasi or full time Government job.24

Thilagaraj noted that in 51 % of the children had been brought up in slums and 68% of them had parents completely illiterate. Alcohol usage was found in 78% of the parents.26

In the later part of the 20th century the World has witnessed some of the worst natural disasters. India too has witnessed the natural calamities on an unprecedented scale. The gory memories of the earthquake hitting Maharashtra in 1993, followed by another equally severe quake rocking the state of Gujarat in 2000 taking a heavy toll of human lives is still vivid. The problems of flooding in the eastern and north eastern parts of India is a recurrent one to live with, resulting in loss of many human lives. More recently the killer Tsunami waves hitting the southern coast of India taking the official death toll to over 10000.37 During such calamities children are always the first to get relief & aid, hence it would be a legitimate conclusion that compared to the number of adult lives lost, the number of child deaths would be low.

Mohan Y from JIPMER Pondicherry, in their preliminary study on the Tsunami affected victims in Pondicherry found out that 2% of children below 15 years were orphaned with most of them being losing their fathers.38 Lakhotia N and co-workers in a survey in the relief camps provided for the victims for the 2000 Gujarat earthquake, noted that in nearly 3% of children one of the parents was reported missing, and in 1 % it was confirmed that one of them was dead.39 Sarkar N R et at in their study noted that 4% of orphans had lost one of their parents in the floods over three years.40 Lindblade K A and co-workers feel that one of the consequences of HIV/AIDS epidemic in Sub-Saharan Africa is an increase in the number of orphans, estimated to have reached 6-11 % of children below 15 years by year 2000.41

4. PROBLEMS OF ORPHANS DUE TO ORPHANING

Orphan-hood is frequently accompanied with multidimensional problems including prejudice, reduced access to health and school services, inadequate food, sexual abuse and others.42

Joyce K. Kikafunda et al found that orphan children living with their elderly grandparents are highly malnourished . A representative sample size of one hundred (100) elderly headed homes was calculated. Fifty (50) homes of children with both parents were randomly selected to act as a comparison group. A single child under the age of ten was randomly picked for anthropometrical measurements in each selected home. The results of this study show that a large proportion of the orphans (47 %) are malnourished when compared with only 28 % of malnourished non-orphans found in the normal homes. In addition, our study findings revealed that the older the orphans (0 – 10 years) living with the elderly get, the higher the level of underweight.43

The death of one or both parents has a profound and lifelong impact on the psychological wellbeing of children. Adolescents in particular are at increased risk for unresolved or complicated bereavement because of their developmental vulnerability and emotional dependency.44 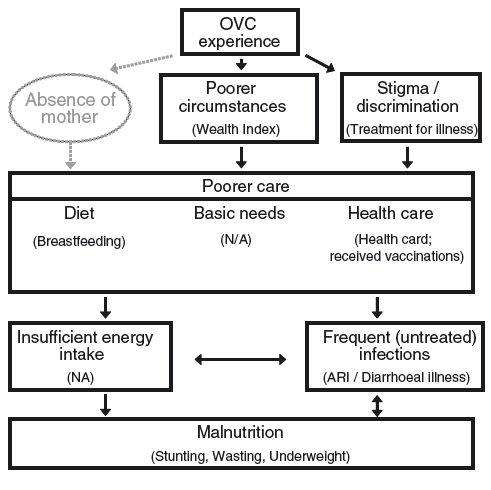 Hierarchical framework for investigating the causal pathways between OVC experience and ill-health and malnutrition. N/B The UNICEF indicators used in the analysis are shown in the brackets- where there is no appropriate indicator to fit into the framework, NA (not available) is noted under the risk factor.45

Orphanage is the name to describe a residential institution devoted to the care and education of orphans i.e., children whose parents are deceased or otherwise unable to care for them. 46

Institutions differ from families in both the organization of their context and in the roles of their participants. These factors affect the behaviors of the participants, both children and staff, and the process of the children’s development.

5.2 DIFFERENCE BETWEEN THE CHARACTERISTICS OF INSTITUTION AND FAMILIES:

Major characteristics of a total institution as proposed by Goffman are as follows:

In contrast, the family is an open setting where each family member participates in some other settings (e.g. school, day care, playground, work place, peer group, church, etc.). As a system, the family consists of a number of dyads and multiads (e.g. marital couple, children, older members of the family, etc.).Participation in these dyads and multiads determines the roles of family members (husband and father, son, brother, and grandson, etc.). Each of these roles is activated by a certain context which contributes to the development of the child. Thus, in families children witness multiple roles of family members (father and husband; mother and wife; sister and daughter; etc.). In contrast, an institutional staff functions in fixed social roles with strictly denied social behaviors. 48

Another important difference between the family and the institution is that the former is a self-supporting system, but the latter is not. The family may or may not rely on the outside world for help, but the majorities of life-supporting activities originates within the family and are carried out by family members, both adults and children. Mothers and fathers combine roles of providers, cooks, servants, educators, and caretakers in the mutual process and mutual context of life, and are assisted by their children. In an institution, these life-supporting activities are distributed between many staff with little or no participation by institutionalized children. 48

6. QUALITY OF SERVICES RENDERED IN ORPHANAGE

Chabra et al in their study on the nutritional status and morbidity among 192 boys aged 6-12 years in a children – observation in North West Delhi, noted that the infrastructure in terms of dining rooms, toilets, recreational facilities and medical care was inadequate.49

Horwitz S M and co-workers observed in their study on children in a foster care facility in New Haven Connecticut State USA, that there were no adequate toilet facilities for the inmates and the caretakers to child ratio was also inadequate.51

Suma Narayan Reddy observed in her study that out of 16 orphanages surveyed by her, there were 28 caretakers, only 2 caretakers had formal training and orientation courses in mental health problems of children and their early recognition and institution of remedial measures.52

Kapur M et al observed that most of the caretakers involved in the care of juvenile delinquents were not properly trained in recognizing the emotional problems amongst children.53

Takayama and co-workers report in their study on a child protection centre in San Francisco that the number of Caretakers was inadequate, and the medical services too were inadequate.54

7. PROBLEMS FACED BY THE ORPHANS IN ORPHANAGES

Orphanage children are deprived of their primary care givers, so they are more prone to physical health problems. Various studies have been conducted at national and international level, on health problems of orphans and vulnerable children in orphanage.

Some of them are as follows.

Chabra et al conducted a study on health and nutritional status of 192 boys in the age group of 6 to 12 years in a children observation home in Delhi. Almost 148 (60%) boys had some or the other forms of morbidity. Skin disease was the commonest morbidity (31.7%), followed by disease of the oral cavity (16%), acute respiratory infection (8.6%) and disease of the ear (9.9%). Additionally, the study revealed that that (36.7%) of boys were malnourished, and (13.5%) of the boys exhibited signs of specific nutritional deficiencies.49

Bhuvanesh Shukla et al found that most commonest health problems in orphanage are skin disease. A sample size of 104 children between the age group of 5 – 14 years was studied. Orphanage children skin problems shows that 3.84% of them had skin patches. Most of the (83%) children had dandruff, 25% of them had pediculosis.50% of them had dental carries, 33.5 of them had gingivitis, 57.7% of them were malnourished.10

Karim SA et al conducted a study in an orphanage in Dhaka to find out the outbreak of scabies and socio-economic profile, water sanitation facilities, personal hygiene and living condition of the orphan children. The study included 492 children and they received clinical check up. The result highlights that 98%children had scabies, and 71% has been infected.56

Dhanya Muralidharan et al a study conducted on oral health status of children in orphanage found that dental caries is most common in them. There were a total of 221 children in the orphanage with a boy to girl ratio of 1.6:1. The number of children having dental caries at baseline was 129 (58.37%). They concluded that comprehensive dental health care program (CDHP) is effective in overall improvement of general and oral health. In resource limited countries like India, such programs organized by dental schools can improve oral health.57

Takayama J I et al observed in their study population that among the 0 to 6 year olds, 27% children had upper respiratory illnesses, 23% had developmental delay and 21% had skin conditions. Among the 7 to 12 age group, 32% failed vision screen, 12% had dental caries and 11% had upper respiratory illness. Among the 13-18 year olds, 31% had failed vision screening, 12% had positive tuberculin skin tests.54

Miller L C and Hendrie N W noted that of the 452 Chinese children adopted form various orphanages from China and observed at an Adoption clinic between 1991-1998, Growth and developmental delays were frequent, in 39% for height, 18% for weight, 24% for head circumference. 75% had significant developmental delay in at least 1 domain; Gross motor in 55%, Fine motor in 49%, Cognitive in 32%, Language in 43%, Social-emotional in 28%, Activities of Daily Living 30% and global delays in 44%, 35% were anaemic, 10% had abnormal thyroid function tests, 9% had intestinal parasitosis (usually Giardia). 3.5% had positive skin tests for tuberculosis, 6% had positive hepatitis B surface antigen, 22% had positive hepatitis B surface antibody. Unsuspected significant medical diagnoses including hearing loss, orthopedic problems and congenital anomalies were seen in 12% of children.58

Wilai S et al conducted a study in Pathum Thani Province, Thailand to evaluate the intestinal parasitic infections in orphanage children. A cross-sectional study was conducted among 106 preschool orphans (60 males and 46 females) and their stool samples were collected. Almost 86 individuals (81.1%) were infected with at least one parasite.59

Ganga et al in their study on 225 children in Thanjavur Observation home observed that, communicable diseases, diseases of the eyes, ear, skin and dental caries