Insomnia is a major health concern particularly when individuals develop dependency and problematic withdrawal symptoms related to conventional prescription drugs. Approximately 27% of the adult male population and 31% of the adult female population in South Africa suffer from insomnia (Strangers et al., 2012). Insomnia disorder is characterized by one or more of the following: difficulty falling asleep, difficulty maintaining sleep, early morning waking, and non-refreshing sleep (South African Association of Sleep Medicine, n.d.). Current conventional treatment for insomnia includes psychological and drug therapies. Conventional medication for insomnia is limited and has its drawbacks (Moch, 2011). While continued research and development is ongoing to broaden the clinical evidence on the use of homeopathic remedies in the treatment of insomnia to further establish its benefits, current information suggests that the effect of individualised homeopathic treatment has not been researched to date in females with insomnia disorder.

The aim of this study was to determine the effect of individualised homeopathic treatment on insomnia disorder in females using detailed case studies and the Insomnia Severity Index.

It is anticipated that the individualised homeopathic remedy will not be effective in the treatment of insomnia disorder in females.

It is anticipated that the individualised homeopathic remedy will be effective in the treatment of insomnia disorder in females.

Sleep can be defined as a state of reversible unconsciousness in which the brain becomes less responsive to external stimuli (Schupp & Hanning, 2003). Although the amount of sleep a person needs varies, most individuals need an average of six to eight hours of sleep a night in order to feel refreshed (Attele et al., 2000). Numerous physiological processes are regulated during sleep and therefore it is a universal need that is essential for well-being (Moch, 2011).

2.2 The Physiology of Sleep

Normal sleep is divided into two distinctive states: rapid eye movement (REM) sleep and non-rapid eye movement (NREM) sleep, which can be differentiated by an electroencephalogram (EEG) (Schupp & Hanning, 2003). Normal sleep begins with NREM sleep and progresses through deeper NREM stages, before the first episode of REM sleep occurs about 80 to 100 minutes later. Thereafter, a sleep cycle, which is the alternation of periods of NREM and REM sleep, lasts approximately 90 minutes and recurs 3 to 7 times per night. NREM sleep is more prominent and deeper than REM sleep during the first half of the night; NREM constitutes the main sleep activity. NREM sleep is shallow during the second half of the night, and the proportion of REM sleep gradually increases during each subsequent sleep cycle (Carlstedt, 2010). Figure 2.1 shows EEG graphs of these sleep stages.

REM sleep is also referred to as paradoxical sleep because while the EEG resembles the waking EEG, it is accompanied by reduced skeletal muscle tone of stage 3 and stage 4 NREM sleep, except in the eye where rapid eye movements (saccadic eye movements) occur. These saccadic eye movements are small, fast, jerky movements, which bring the eye from one visual fixation point to another and may be associated with watching the visual images of dreams (Sanoop et al., 2012). Despite the apparently alert EEG it is more difficult to awaken an individual from REM sleep than it is to awaken them from slow-wave sleep. In addition, there is an increase in blood pressure, heart rate and respiratory rate, as well as increased blood flow to the genitals. Control of core temperature is poor during this state of sleep (Wagner & Silber, 2004). During REM sleep the EEG becomes desynchronised and low voltage fast activity is seen, PGO (ponto-geniculo-occipital) spikes also appear, which is characteristic of REM sleep (Sanoop et al., 2012).

SLEEP STAGES ON AN EEG 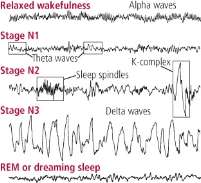 Figure 2.1 Different Stages of Sleep as seen on an EEG

2.3 The Function of Sleep

There are 3 theories accredited to the function of sleep:

2.4.1 Definition and Description of Insomnia

Insomnia is defined as the inability to obtain an adequate duration or quality of sleep (National Sleep Foundation, n.d.). It is characterized by one or more of the following: difficulty falling asleep, difficulty maintaining sleep, early morning waking, and non-refreshing sleep (South African Association of Sleep Medicine, n.d.). Insomnia occurs despite an adequate time and opportunity for sleep and results in impairment in daytime functioning (World Health Organisation, 2009).

2.4.2 Incidence, Epidemiology and Demographics of Insomnia

Insomnia is the most common sleep disorder and the second most common overall complaint reported in primary healthcare settings (Attarian, 2004), with approximately 30% of the general adult population in South Africa occasionally suffering from insomnia. Insomnia is present in around 50% of individuals treated in a clinical setting and about 10% of these individuals suffer from persistent insomnia. Although insomnia affects individuals of almost every demographic, complaints of insomnia increase with age, and women are more affected than men (Truter, 2008).

Epidemiological studies comparing the prevalence of insomnia between the genders all report a higher prevalence amongst females. Studies have shown that there is an increased prevalence of insomnia amongst younger females, even in adolescent girls, compared to their age-matched male counterparts. One of the most common perimenopausal symptoms in women aged between 35 and 55 is insomnia (Grewal & Doghramji, 2010).

Biological differences in sex hormones may contribute to the gender difference in insomnia. For some women, insomnia may arise secondary to menstrual symptoms e.g. headaches, bloating, cramping and breast tenderness. Sleep disturbances during menstrual periods are associated with alterations in progesterone, prolactin and melatonin levels. Melatonin modulation by sex hormones may cause dysregulation of sleep-wake mechanisms (Soares, 2005).

Insomnia occurs in approximately half of all menopausal women and may be directly associated with the presence of hot flushes. Nocturnal hot flushes may cause repeated awakenings throughout the night. Menopausal women experiencing hot flushes report more frequent awakenings, inefficient sleep, and poor quality sleep, compared with those who do not experience hot flushes. Temperature-regulating and sleep-regulating centers in the brain may be disturbed by changes in hypothalamic-pituitary-ovarian hormone levels that occur during menopause, resulting in hot flushes and insomnia (Soares, 2005).

In addition, increased levels of psychological distress have also been postulated as potential contributors to insomnia in women; including social changes, stress associated with the “empty nest” syndrome, nursing aging parents or family members, separation from life partners due to divorce or death (Soares, 2005).

Insomnia may be situational (acute), persistent, or recurrent. Situational insomnia lasts for a few days up to a few weeks and is usually caused by life events or rapid changes in environment or sleep schedules. Once the precipitating event subsides, the insomnia usually resolves. In some individuals, insomnia may persist for a long period of time after the initiating event, possibly due to conditioning and heightened arousal; conditioned arousal may then persist and lead to persistent insomnia. However, in some individuals, insomnia may have an insidious onset where no identifiable cause can be found. Insomnia may also be episodic, with recurrent episodes of sleep difficulties occurring during stressful events (American Psychiatric Association, 2013).

According to the DSM-V (Diagnostic and Statistical Manual of Mental Disorders, fifth edition), insomnia disorder is classified as:

2.4.5 Signs and Symptoms of Insomnia

Factors that predispose an individual to insomnia include: genetics, personality traits, psychologic arousal (eg. anxiety, agitation, and heightened vigilance), and time of day sleep-wake preference (Lee-Chiong, 2008). One theory is that physiological hyperarousal may be a predisposing factor for insomnia; research has shown that individuals with insomnia disorder have an increased metabolic rate, increased secretion of ACTH, increased beta activity in the EEG, a more rapid increase in heart rate in response to stress, and increased daytime alertness despite having a shorter sleeping period. Another predisposing factor for insomnia may be a decreased homeostatic drive for sleep; research has shown that patients with insomnia disorder do not have the same increase in slow-wave sleep following sleep deprivation that is seen in those without insomnia. A decreased sleep drive would make it more difficult to initiate and maintain sleep under baseline as well as sleep-deprived conditions (Lee-Chiong, 2006).

Insomnia is a symptom with numerous and diverse aetiologies, and in a large percentage of the population more than one cause may be present; these include: stressful life events such as conflicts in the workplace, marital distress, or final examinations; a change of usual habits; sudden changes in sleep-wake schedules caused by jet lag or changes in work shifts; environmental disturbances such as excessive noise or light in the bedroom; medication use or medication withdrawal; substance abuse; and chronic medical or psychiatric conditions. Examples of chronic medical conditions include: any condition associated with pain, respiratory or cardiac diseases associated with paroxysmal nocturnal dyspnoea, renal failure, hyperthyroidism, and neurodegenerative diseases (Lee-Chiong, 2006).

Perpetuating factors are cognitive and behavioural changes that occur after an individual has had insomnia for a period of time. Cognitive changes that occur include preoccupation with sleep during the day, as well as a fear of not being able to sleep and fear of daytime impairment. This leads to tension at bedtime, and upon waking up during the night. Behavioural changes include keeping irregular sleep-wake schedules, taking naps during the day, staying in bed in an attempt to gain more sleep, and engaging in stimulating activities during the night. Individuals often make these changes in response to their insomnia, in an attempt to get more sleep; however, while these changes may relieve insomnia in the short-term, they promote insomnia in the long-term (Lee-Chiong, 2006).

Insomnia may result in feelings of fatigue and sleepiness. A number of individuals complain of mood disturbances and cognitive difficulties such as irritability, mild anxiety and depression; they may also complain of poor memory and concentration, and difficulty performing complex mental tasks. Because of the irritability and fatigue that is associated with insomnia, interpersonal difficulties may result; on the other hand, interpersonal difficulties may be the cause of insomnia. Insomnia may result in restriction of daytime activities, such as work, exercise and social events. This lack of regular daytime activity may in turn contribute to insomnia. In addition to these, insomnia may exacerbate symptomatology of co-morbid disease, and may herald the onset of mood disturbances (Schutte-Rodin et al., 2008).

The Insomnia Severity Index is a 7-item questionnaire that provides a global measure of an individual’s perceived insomnia severity based on the following indicators: difficulty falling asleep, difficulty staying asleep, and early morning awakenings; satisfaction with sleep; degree of impairment with daytime functioning; degree to which impairments are noticeable; and distress or concern with insomnia. Each item is rated on a 5 point Likert scale, and the total score ranges from 0-28. The ISI has good internal consistency and test-retest reliability. It has proven to be sensitive to therapeutic changes in several treatment studies of insomnia. This instrument can be used to evaluate the initial severity of insomnia, as well as the clinical significance of improvements achieved during the treatment of insomnia (Edinger & Carney, n.d.)