Ebola virus is a combative pathogen that causes a fatal hemorrhagic fever syndrome in humans and animals, which was first identified near the Ebola River Valley in Zaire, Africa, in 1976 (Sullivan, Yang and Nabel, 2003). The Marburg virus and the Ebola virus formed the family Filoviridae (Peters, 2005). The outbreak of Ebola fever in 2014 is in Guinea, Liberia and Sierra Leone which has affected the entire country; also in Kayes- Mali; Madrid-Spain; Dallas, Texas, New York City- United States without wide spread transmission and countries with no current transmission are Nigeria and Senegal (Centers For Disease Control and Prevention, 2014c). The general mortality rate of Ebola hemorrhagic fever is 57% – 90% (McElory et al., 2014). Mortality rate in pregnant women is 95.5%, which is not outstanding the overall death toll (Mupapa et al., 1999). The number of cases reported in multiple countries are as follows 1976- 603, 1995-315 and in 2014(March)-5481 (Centers For Disease Control and Prevention, 2014c). The virus is transmitted through direct physical contact (WHO, 2014). Ebola fever remains an epidemic for the people of equatorial Africa, with an increase in the cases of outbreak since 2000 (Feldman and Geisbert, 2010).

The illness caused by a negative stranded RNA virus is known as Ebola hemorrhagic fever (Pourrut et al., 2005). It is an acute and serious illness and can be fatal if untreated (WHO, 2014). The Ebola virus is aboriginal to East Africa and belongs to the Filoviridae family (Chippaux, 2014) .Ebola virus disease first appeared in Nzara, Sudan and in Yumbuku, Democratic Republic of Congo, simultaneously (WHO, 2014). It was in the year 1976 and the disease got its name because it occurred in a village near the Ebola River (WHO, 2014). Since the time of outbreak of the disease, the mortality rates ranges from 50% to 90% in Africa (Sullivan, Yang, Nabel, 2003). The first outbreak in Sudan caused infection to over 284 people, with a mortality rate of 53% (Waterman, 1999). Figure 1: illustrates the historical view of the outbreak (Pourrut et al., 2005). 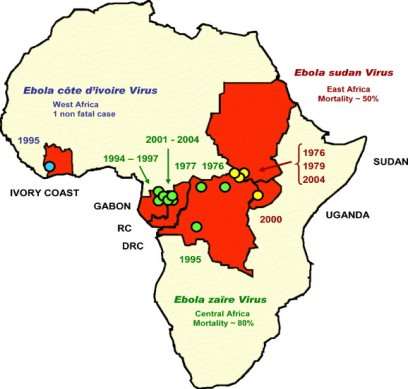 Throughout 1994 to 1996, not less than five individualistic active sites of Ebola virus transmission were recognised: Cote d’lovire in 1994, Democratic Republic of Congo in 1995 and Gabbon in 1994, 1995, 1996 and furthermore the sites were found in or near tropical forests (Peters and Peters, 1999). The 2014 Ebola outbreak is the first outbreak in West Africa and the largest outbreak in the history of the disease, with a total case count rate of 6263 and a total death of 2917 ( Centers for Disease Control and Prevention, 2014d). The first human case to be diagnosed in Africa was a female Swiss entomologist who became ill few days later, autopsying a chimpanzee dead in Tai National Park, situated in the ivory coast and this took place during the period of 1994 (Pourrut et al., 2005).

The Ebola virus is a thread like, single stranded RNA virus with an uncommon, inconstant length and a branched histology (Paustain, 2013). When Ebola virus nucleoprotein (NP) enters mammalian cells it congregates into helical structures (Noda et al., 2010). The nucleoprotein which is a recombinant is correlated with non-viral RNA (Noda et al., 2010). The complete set of genes or genetic material present in the Ebola is 19 kb long and has seven reading frames (Sullivan, Yang and Nabel, 2003).The frames conceal structural proteins including the virioa envelope glycoprotein (GP), nucleoprotein (NP) and matrix proteins VP24 and VP40 and also non structural proteins, including VP30 and VP35 and the viral polymerase (Sullivan, Yang and Nabel, 2003). A soluble 60 to 70-K Da protein (s GP) and a full- length 150 to 70 K Da protein (GP) are two genes produced by the open reading frame of the Ebola virus and these proteins insert into the viral membrane through transcriptional editing (Sullivan, Yang and Nabel, 2003). Figure 2: demonstrates the crystal structure of the Ebola virus. 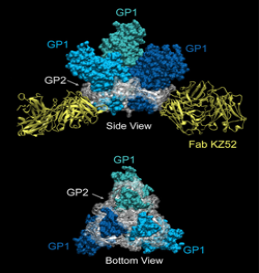 Figure 2: The crystal structure of an Ebola virus GP which reveals a three lobed chalice like structure. The three GP1 subunits mediate attachment to new host cells and are tethered together by the three GP2 subunits (Lee et al., 2008).

Immunohistochemistry and Electron microscopic analysis revealed that endothelial cells, mononuclear phagocytes and hepatocytes are major targets of infection (Zaki et al., 1999) .The virus is carried by animals and is transmitted to humans, this spreads in the human population through human-to-human transmission (WHO, 2014). Handling of ill or dead chimpanzees can also be a cause for the transmission of the virus, among humans Ebola can be transmitted by contact with infected bodily fluids, blood secretions or tissues (Jaax et al., 1995).

When the Ebola virus enters the mammalian cells and infects a person, symptoms start to show between 2 to 21 days, or usually appear after 5 to 7 days after infection (NHS Choices, 2014). It begins with a fever accompanied by severe headache, joint pains, muscle pain, sore throat, nausea, vomiting, diarrhea, chills, low back pain and fatigue (National Library of Medicine, 2013). These symptoms are shown between the incubation period of the virus (National Library of Medicine, 2013). Unfortunately, primary symptoms of Ebola virus disease are nonspecific (Willey, 2014). Patients may develop other serious symptoms, as the disease progress and signs such as eye redness, rash, hiccups, cough, chest pain, internal and external body bleeding (for example: mucosal surfaces) and difficulty in breathing and swallowing (Willey, 2014). There can also be signs and symptoms of coma, disseminated intravascular coagulation and shock (National Library of Medicine, 2013).

The infection, caused by Ebola in the out breaks are confirmed by diverse laboratory diagnostic methods (Saijo, et al., 2006). The Ebola fever is difficult to be diagnosed, as the early symptoms and signs are similar to other diseases such as typhoid and malaria, but if the doctor suspects they use blood samples to identify the virus, including Enzyme- linked immune sorbent assay (ELISA) and Reverse transcriptase polymerase chain reaction (PCR) (Mayo clinic, 2014). Currently only the geographic origin of the specimen may give some identification as to recognize the virus involved (Pattyn, 2014). Laboratory tests used in diagnosis include virus isolation which is done within few days after the symptoms begin, later in the disease course or after recovery the test of antibodies IgM and IgG is done and retrospectively in decreased patient’s immunohistochemistry, PCR and virus isolation are performed (Centers for Disease Control and Prevention, 2014a).

Ebola virus is classified as Risk Group 4 which needs safety methods of diagnosis (Public Health Agency of Canada, 2014). Blood specimens are generally used to distinguish specific antigens or genes of the virus (Pozos, 2014). One of the methods used to detect Ebola is through Polymerase Chain Reaction (PCR) and in this method some doubted Ebola virus undergoes replication and the results are analyzed using electrophoresis (Pozos, 2014).Test done to diagnose the fever also include liver function test, test of how well the blood clots and C.B.C (The New York Times, 2014).

Ebola virus fever has no known cure and antiviral medicines do not work well against the disease (The New York Times, 2014). Brincidofovir, the modified version of the drug Cidofovir inhabits replication of DNA viruses and this drug is used to treat Ebola patients (Rancaniello, 2014). In most cases the patient is hospitalized and will ostensibly need intensive care (The New York Times, 2014). The treatment given for a patient deteriorating from shock includes medication and fluids given intravenously (Pozo, 2014). The chance of survival can be significantly improved if the following basic involvements are used at the start: providing intravenous fluids and balancing body salts, maintaining the oxygen levels and treating other infections if they occur (Centers for Disease Control and Prevention, 2014b).

An experimental treatment, known as ZMapp which is a combination of three antibodies can be tried, even though it has not yet been experimented on humans for effectiveness (NHS Choices, 2014). If they have bleeding problems he or she might require transfusion of platelets or blood (National Library of Medicine, 2013). Oxygen therapies and pain medications can be given to ease the pain (Kivi, 2012). Supportive treatment methods for Ebola Virus Disease also include medications to control fever, help the blood clot, to control blood pressure and antibiotics to prevent secondary infections from bacteria (Clinaero, 2014).

The deadly Ebola virus is killing thousands of naive people worldwide. No known successful treatment is found for cure. Filoviruses, Arenaviruses, Flaviruses and Bunyaviruses are the viruses responsible for causing viral hemorrhagic fever including Ebola which starts from mild symptoms to death. The Ebola virus spreads through the blood and replicates in organs including the liver, lymphatic organs kidneys ovaries and testes .Prevention is only option for the moment. First step of prevention is the spread of knowledge worldwide about the Ebola virus and its efficiency. In order to eradicate the disease the chain of infection can be identified and comprehended as well as further research can be conducted and a particular medicine can be found to cure the disease. Isolating the patient, practice of cautious hygiene and avoiding coming in contact with body fluids can reduce the spread of the disease. In conclusion, one has seen the facts of Ebola hemorrhagic fever as dreadful and gruesome as they are, but instead a more comprehensive approach is required which must include a global perspective and improved healthcare acquired from socioeconomic betterment is vital, which would protect the individual as well as those around the world.

Paustian, (2014). ‘Ebola is a filamentous virus with a single-stranded RNA genome’. The Microbial World: A look at all things small. [Online] Microbiologytext.com. Available at: http://www.microbiologytext.com/index.php?module=Book&func=displayarticle&art_id=494 (Access: 11 October 2014).