The rate at which road carnages are reported have increased significantly especially within the 21st century. Many people have been involved in accidents because of recklessness and inattentiveness in the roads as motorists. Statistics on these establishments creates the need of effective address before further harm and deaths are experienced. Many aspects in life have contributed recklessness relative to phone use by motorists. Theories relative to multitasking, movies, and ideologies devised by cell phone companies are among major contributors to phone use in cars.

The young members of society bare the harm of using phones in cars because of misinformation, lack of information or ignorance to road safety measures. The youth are among the population most affected by road carnages and effects. There is need to give information to the youth on the dangers of using cell phones in cars before they engage in driving lessons and eventually driving. The information to the young people is important as it would help inculcate good cultures in driving and being considerate while on roads.

The significance of the dangers of using cell phones by motorist is addressing recklessness that contributes to the death of road users through unjustified ways. Through addressing such an issue the importance of road safety will be illuminated. Road carnages have been for long related to vices like drinking and the use of drugs that interfere with cognitive abilities while on the road. This aspect will contribute an understanding of the relationship between using cell phones and using drugs while driving. Therefore, the presentation seeks to enable positive contribution in saving humanity through knowledge on ways to reduce and prevent road accidents.

Outline of the Presentation 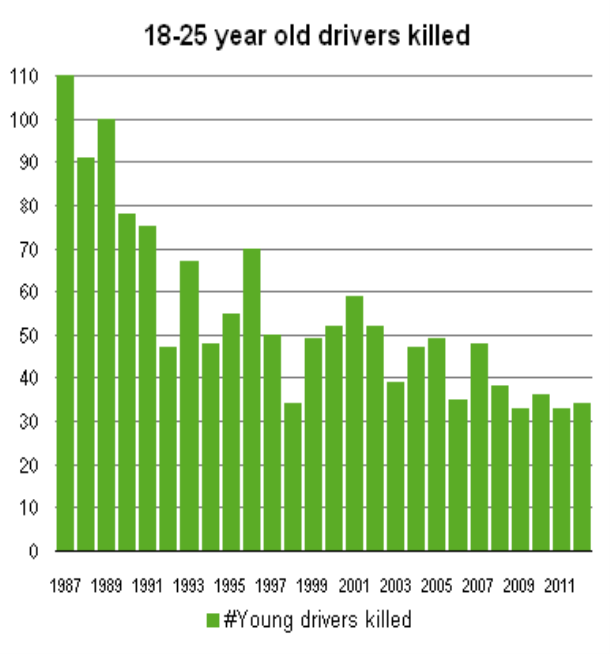 The modern society comprises of businessmen, students, lawyers, doctors and people of different occupations. These people have to ensure that they are constantly connected to clients, family and other people of significance in their lives. The popularity of cell phones has ensured a constant connection and updates in the lives of such people. However, most people tend to indulge in the wrong use of cell phones. This is because some people are either forgetful, oblivious or ignorant of the dangers of using cell phones while driving. The chart above stipulates how drastic accident levels are among the young people in the United States of America; which have highest cell phones popularity and usage. The popularity of cell phones has contributed to a culture which is costly to the society based on the number of deaths on roads because of recklessness. Regardless of the urgency of a call, it is not justified to put other people’s lives at risk because of own neglect and perceptions. The prohibition of using cell phones while driving is based on the imminent threats to people lives.

According to the Insurance Institute of Highway Safety, motorists are four times likely to get injured while driving and using their cell phones (Violanti & Marshall, 1996). The high possibility of indulging in a car accident while using of cell phones is based on two factors. While dialing, most people have to look at the phone interface. This establishes a distraction from the incoming vehicles or objects, which increases the risk to crashing into an oncoming car or object. Another evident aspect that transpires in the use of cell phones is that people can be absorbed in the cell phone conversation to the extent that their thinking is impaired. This effect is similar to driving while drunk as the driver is not within proper reasonableness to make decisions while on the road.

According to the Virginia Tech Transportation Institute and the National Highway Traffic Safety Administration (NHTSA), the use of hand-free phones is also dangerous compared to hand held phones (Rosenboom, 2006). In a study conducted in 2004, the motorists that used hands free phones have to redial approximately 40% of the time compared to the hand held phones by motorists (Rosenboom, 2006). This postulates the unjustified arguments which most people tend to engage as the excuse to use cell phones while driving. According to this research, the use of hand-free phones by motorists is more dangerous compared to the hand held phones.

In the cases of near accident experiences, motorists that are on hands free phones are 18% slower in braking compared to those using hand-held phones (Lamble, et al, 1999). This statistic is similar to that of a person driving while intoxicated. These statistics support the ideology that is formed against the conventional knowledge of multitasking. Multitasking is a simple myth which does not suffice on the dangerous roads as truth or wisdom. Talking and driving are both activities that require attention. Therefore, performing both tasks at the same time is subjecting the brain to impossibilities and endangering other road users’ lives. The culture has grown popular especially among the youth who make statistics as they also suffer from road carnages due to recklessness.

Cell phones are vital gadgets to people’s lives especially in the 21st century where people have the need to be connected constantly. However, despite the convenience they offer, people have to consider the relative negative attributes. In the United States, it is reported that 6.4% of all crashes are because of inattentive driving (Strayer, Et al, 2003).

Driving on any road, especially highways, is a matter that should not be taken lightly. This is because many people’s lives including unaware bystanders are dependent on the attentive level of motorist. Responsibility on the roads is a matter that requires the strictest rules against offenders to avoid road carnages.

A: There is no conclusive data to suggest that female drivers are any more likely to have an accident than males due to multitasking.

A: As the population increases in the coming decades, it is logical to say that road accidents will increase proportionally. One possible way to create awareness is a national campaign akin to the DARE drug awareness program of the 90’s.